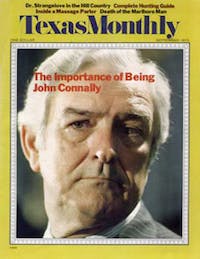 Books by the Volume

O. K., we know you’ve been to used book stores before and you’re not likely to get excited at the idea of rummaging through paperback editions of Valley of the Dolls and Grab Your Joystick which is why we’re recommending a little, out-of-the-way book store in San Antonio, The Village Bookstore. The books are used, but they tend more to rare and fine books on selected subjects than those haphazard collections of practically everything found in most used book stores.

Owner David Bowan, who has a passion for this sort of thing, goes through all the other used book stores in Texas buying the best books they have to offer for resale at his shop. You’ll find extensive collections of books dealing with Mexico, Texas and the Southwest, drama and the performing arts, fine children’s books, early books on television and radio and genuine collector’s items in first editions and well-made books.

If you aren’t already a canoeing enthusiast, a new publication called Texas Rivers and Rapids stands a good chance of turning you into one. The magazine-sized, two-volume guide to the rivers of Texas is rich with aquatic fundamentals, maps, and detailed descriptions of put-in points, take-out points, hazardous rapids, and suitable campsites along a diverse array of canoeing streams appropriate for the beginner or the experienced canoeist. There are even suggestions for trips the whole family can take.

The authors’ excitement is infectious, and they know their rivers well. On many streams, fall is an ideal time for canoeing. After reading one of these booklets, you probably won’t want to wait until spring. Try Volume I first.

The little-known Val Verde winery in Del Rio produces the only commercially-made grape wine in the Lone Star State, and a right pleasant drink it is. Founded by an Italian immigrant in 1883, the 12-acre plot in a quiet old residential quarter produces two red wines (dry and sweet) and the house specialty, a sweet amber aperitif.

Tom Qualia is proud of the fact that his wines have no additives and undergo no pasteurization (in contrast to many of the California jug wines). Prices are the height of reasonableness: a dollar a bottle for the reds, $1.25 for the amber. The wines are available nowhere in the world except on the premises, although they will ship three or more cases to you on request.

Pianists by the Score

Oberammergau stages its famous Passion Play every ten years; Fort Worth, not to be outdone, hosts the Van Cliburn International Piano Competition quadrennially.

The two-week-long event features pianists from all over the world, performing not only selections of their own choosing but a specially-commissioned piece as well. This year’s commissioned work is “Night Thoughts (Homage to Ives)” by the dean of American composers, Aaron Copland. Since none of the pianists has ever had a chance to hear the work before, the interpretations should provide a fascinating insight into the essential musicality of each artist. Cliburn himself will be in residence for most of the competition.

Highlights of the competition will be the Finals on September 28 and 29, when each of the three remaining competitors will perform two concerti with the Fort Worth Symphony Orchestra. The winner will present a solo performance on Sunday, September 30. Full details may be found in the Fort Worth section of Around the State.

Every town in Texas from Houston to Luling has its own festival each year, pushing the local product whether its oil or watermelons, but there’s only one Texas Folklife Festival.

Presented for the first time last year at the Institute of Texas Cultures in San Antonio, the festival is a composite of some 80 of the various festivals that are presented around the state, all with an aim of showing the diversity of Texas’ ethnic and national origins. Displays of Polish Christmas decorations are next to samples of Cajun food alongside demonstrations by one of the few remaining men who can make a rope out of horse hair.

But what gives the festival a special style is its lack of commercialization. There are some things for sale, but mostly it’s food from ‘possum to enchiladas. Most of the festival is devoted purely and simply to demonstrations of how Texans of all types used to live. They are fascinating and don’t cost a thing except for the nominal gate admission.

Remember that fossil fern you found while plowing in Bryan; that blue rock you plucked from the banks of Big Sandy? The 20th Annual Houston Gem and Mineral Show this month has a free identification service for fossils, rocks, and minerals; bring it and see what they say.

The show also has down-to-earth exhibits featuring hundreds of representatives from the national underworld, including rare gems. You can watch demonstrations of faceting, tumbling, sawing, and silver-smithing.

Among the special exhibits are a collection of cameos (including a spectacular specimen from the collection of Benito Mussolini), a group of topaz specimens from the University of Texas, a display of Biblical gems, and a demonstration of jewelry-making.