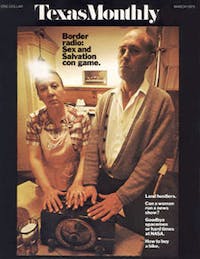 If you liked Che Guevara, you’ll love the Third World Film Series being shown at the University of Texas in Austin. There is nothing Hollywood about these films, and their technique leaves something to be desired; but if you want to know what filmmakers from the Third World are doing with the medium these days, this is your best chance. It’s worth it for the point of view alone.

This month’s Wednesday night offerings come from South America and Africa. The documentaries focus on Bolivia ‘s checkered politics, torture in Brazilian prisons, and the terrorists of Mozambique; there are also fictionalized essays about the cultural conflicts faced by black Africans and Algerians whose lives intersect French civilization.

Sir Doug and His Hybrids Bring It Back Home

The name of the album is “Doug Sahm and Band,” but fans recognize the musicians and the music as the old Sir Douglas Quintet, surrounded by some interesting new faces. A closer examination reveals a brace of super sideman indeed—Bob Dylan, Dr. John, David (Fathead) Newman, David Bromberg, and others.

Doug Sahm has been laid back in San Antonio and Austin during much of the past year, getting it all together. Last month he hit the road again for a tour, opening in New York at Max’s Kansas City, but he’ll be back. Everybody, ultimately, is going to San Antone.

An Audience with Dolph

Looking for a different kind of adventure on your next out-of-town trip? Houston has the Astrodome, San Antonio has the River Walk, Dallas has Texas Stadium, but only Austin has…Dolph Briscoe.

Having your picture taken with the new rancher-banker-governor isn’t all that hard to do, if you know how to go about it. And what better way to create an instant family heirloom?

Just write a letter to the Governor (State Capitol, Austin), telling him when you plan to be in town and requesting an appointment for the picture. A well-timed letter from your local state Senator or Representative wouldn’t hurt a bit, either. The Governor’s charming secretary, Mrs. Gloria Turner (512-475-4101), says he finds time for several pictures with plain folks every week, and she’ll do her best to arrange your meeting.

Frames may be purchased nearby at the Country Store Gallery, 1304 Lavaca, or at Gibson’s Discount Center, 2101 West Ben White.

Art Auction: Get’em While They’re Not

Attention: art connoisseurs, bargain hunters, auction addicts, and mothers of artists! Would you have liked to have bought any of those high-priced paintings down at places like the Dubose Galleries five years ago, before the artists got famous? Well, now’s the time to give it a try: the annual Art League auction is your chance to invest in Houston artists at bargain prices. Pick the winners of the future from a wide collection of painting and sculpture that contains some first-rate work by Houston’s up-and-coming artists. William Simpson auctions off 150 selected works while many other unframed paintings are sold directly from tables. Each piece is donated by the artist and proceeds go to the Art League Building Fund.

Back in 1873 the people of a bustling trading and supply center on the track of the cattle drives north decided that since the railroad was coming their way, they’d better incorporate and become a city. Hardly had the ink dried on the signs proclaiming the place to be Fort Worth than the “Panic of ’73” wiped out the railroad and just about wiped out the town.

One resident wrote that the town was so dead he had seen a panther lying unnoticed in the main street. Since then the Panther City has livened up a bit, and this month it celebrates its hundredth year as an incorporated town.

A collection of photographs at the Amon Carter Museum illustrates a hundred years of Fort Worth’s history. Among the many faces are the ones that tamed the West and made Fort Worth what it is (and isn’t) today. The exhibition contains over 100 photographs and lasts through March.

Texas opera lovers may gaze longingly at Manhattan, where the Met presents nearly two dozen different operas in a seven-month season, but the Lone Star state actually offers a surprisingly good selection on its own. You simply have to travel around a bit to find them.

This month’s Mecca is San Antonio, where sopranos Birgit Nilsson, Beverly Sills, and Roberta Peters will gather with other internationally-known stars to present two weekends of Italian opera. Peters is featured in Donizetti’s The Elixir of Love (Mar 25), Sills in Verdi’s La Traviata (Mar 30), and Nilsson in Puccini’s Tosca (Apr 1). The series begins with Cavalleria Rusticana and I Pagliacci on Mar 24. In past years, visitors have found the Symphony Society’s offerings well worth the trip.

Ticket information may be found in the San Antonio classical music listings in Texas Monthly.

If you really want to make a Mediterranean day of it, the Symphony Society is sponsoring an informal Italian dinner at the Lone Star Pavilion, Hemisfair, following Tosca. $6.75 per person, including wine (presumably not Lone Star Wine). Details at (512) 824-1054.