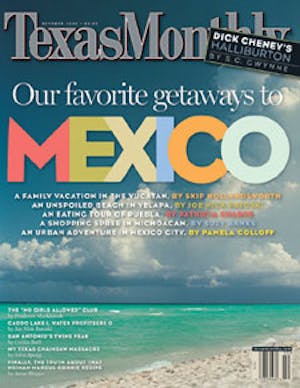 JAZZ IT UP Jazz, the great musical art form invented in the U.S., became a part of world culture, fusing different rhythms along the way. This month sample the new sounds beginning October 6, when Calle 54, a musical performance based on the film of the same name about Afro-Cuban Latin jazz, takes the stage at Bass Concert Hall in Austin. But this is just a warm-up. Brownsville hosts its Latin Jazz Festival, which features an eight-piece ensemble with Chuchito Valdés, Jr., the son of Chucho Valdés (of the film Calle 54), October 17-19. In Corpus Christi the Texas Jazz Festival takes over three stages at Heritage Park Multicultural Center October 18-20 and features a performance by the Tom Braxton Jazz Quartet. Also on the eighteenth, legendary drummer Roy Haynes and friends pay tribute to Charlie Parker at Houston’s Wortham Center. Whether your taste tends toward New York cool or Havana hot, you’ll find it close to home in October. (See Austin: Music/Dance; Houston: Music/Dance; and Elsewhere: Other Events.)