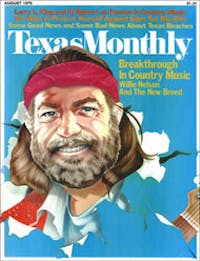 Original productions are so seldom seen in the theater these days that if a group regularly schedules one a season it is cause for rejoicing. So when the Dallas Theater Center sponsored not a single play but three days’ worth of these creative orphans, as they did at their Playmarket 76 in May, it was a downright jamboree.

Seven plays were presented by the DTC company to an audience of producers, clients, agents, and theater lovers from all over the U.S. in a well-founded hope that these plays might find new stages to conquer. The plays represented the cream of the past two seasons, when the first Playmarket was launched to wide notice.

As DTC managing director Paul Baker maintains, his is not a museum theater, where the successes of years past are dusted off for anxiety-free, status-quo viewing. DTC prefers taking risks, and a hefty chunk of each season is given to the production of new plays- works in progress that allow the viewer to hare in the excitement of creativity. True, you may not get anything more than possibility, but sometimes that in itself is worth the price of admission.

Preston Jones’ A Place on the Magdalena Flats is not yet a great play, but it is certainly the work of a brilliant writer. The separate strengths which emerge from its oddly flat tapestry are more intriguing and vital than the work as a whole, which I suspect is still in its adolescence. Jones can create characters, delicious dialogue, and sense of place—and most important, set something rich and alive on a stage and sustain it through the final scene. The production by director Ken Latimer was by far the most accomplished of the Playmarket series.

Magdalena is a pageant of survival, an existential patchwork of high humor, sudden tenderness, and futility set upon a bone-dry New Mexico plain. The stoic hero, Carl Grey (Drexel Riley), has dreamt all his life of making a go of his ranch, but between the harshness of nature and his own fallibility, his dream may well crumble to the dust his wife can’t keep out of their house.

Virtually every event in the play is a whiplash against Carl’s stubbornbelief in his land. Drought, disappointment, the ever-cutting wind all swirl around Carl, a survivor of the Bataan Death March, which he lived through not by heroics but simply by refusing to die. At the end of the play, shaken and puzzled but still marching, he remains in destiny’s course while the Magdalena wind blows into his face.

However, certain dramatic realities cut the thunder from Carl’s saga. His stoicism and idealism are never fully realized, and his role as mere reactor to fate draws sympathy away from him. His wife, played beautifully by Synthia Rogers, is so touching in her concern for their unborn infant and, especially, for Carl’s young brother Frank (Keith Dixon), that audience empathy inevitably flows to her.

And in the end, it is Frank who shifts Jones’ artistic intentions—so completely, in fact, that whether brother Carl withstands him becomes a bit irrelevant. He is eighteen, a hopelessly self-destructive fool, a total loser who grabs your shirt from his first entrance until his overlong suicide soliloquy. Yet, it is Frank who commands both the stage and the world of Magdalena Flats. No character remains indifferent to him; very few conversations exist in which he doesn’t intrude; virtually all the dramatic action is prompted by him. Jones had indicated that his play was about Carl ; he might be wise to let Carl’s chips fall where they may and allow Frank to keep the stage center he has so rudely grabbed.

Faces of U.S., a full-length theater piece, began as a series of improvised skits which were later scripted, after the heat of creativity. It proved to be one of Playmarket’s electrifying surprises.

Faces is a multimedia series of vignettes of America, 1776-1976, performed by the DTCs Mime Troupe. The Troupe, ten exceptionally gifted performers under the direction of Robyn Flatt and John Stevens, is one of the plums of DTC. They have worked together

intensively for about a year, and their art depends upon a remarkable coordination, not only between body and emotion, but also among themselves. In mime, rapport is the necessary intangible upon which the art is built.

The Troupe was responsible for several exquisite moments: among them was an Indian (Bob Smith) creating Thanksgiving for the Pilgrims; a joyous, down-home seventeenth-century Jamestown barn raising; Washington crossing the Delaware; the hope-filled marriage and gradual aging of a pioneer couple (Flatt and Stevens) ; the riotous tyranny of an elderly black majordomo (Paul Callihan) over his oh-so-dignified but insecure middle-aged lady of the manor (Jane Farris); and the Civil War scene, a poem in movement, in which the gesture took on the quality of dance. The emotional interplay and obvious physical trust among the Troupe members provide Faces with its artistic backbone, and Callihan’s score is always apropos and never intrusive.

Stillsong, by Sallie Laurie, is a long play of great possibilities that asks a great deal of its audience. It is loaded with all the excitement and tedium of a rough draft. With time and care, it could evolve into a finished work. As it stands now, it leaves one with much more regard for its production and the author’s creativity than for the piece itself.

Stillsong attempts to present the past, present, and indeed, the very meaning of life of a dying Virginia farm woman, Maddie Ashworth, played astutely by Judith Davis. Maddie is based on the playwright’s grandmother, and perhaps that explains why she is too kind, too sentimental about Maddie Ashworth, often treating her as a priceless memory rather than as a real person.

On stage, in an exciting set by Virgil Beavers, the ancestors and descendant of Maddie Ashworth participate not only in her present, but also in her fantasies, in scenes of great charm and insight. But more often than not, Stillsong’s vital elements are hidden amid long stretches of exposition and seemingly undistilled research by the author. Even if one could present a documentary of a human life on stage, only the most telling characteristics, encounters, and emotions should be allowed to survive. That is Laurie’s task as artist. Having demonstrated an enormous commitment to Maddie Ashworth, she must now transform all she knows into her own unique, very particular viewpoint, imposing her own consciousness over Maddie’s.

Standoff at Beaver and Pine, by Sally Netzel, is fast-paced, often very amusing, but strangely disappointing. An idealistic female Indian lawyer terrifies a small-town Wisconsin justice of the peace, his wife, their gossipy neighbor, and a foolish young couple. The lawyer holds the characters at gunpoint and harangues for a better world at one moment then suddenly shifts into sentimentality over the past in the next.

I felt as if Netzel’s cue didn’t deliver. Is Standoff a serious comment on prejudice as it affects those who would be neighbors or friends? Or is it a character comedy about a charming, lovable couple who own up to their weaknesses and thus liberate the rigid radical from her own extremism? Or are we supposed to accept all of them a farcical, like the young unmarried couple expecting a child and in need of instant respectability?

All these options exist, and the play was directed with tempos and emphases to accommodate them all. But by curtain’s fall we’re left not with a satisfying whole but with all the pieces of an unassembled jigsaw puzzle.

Manny, a musical version of the medieval tale of Everyman, with music by Randolph Tallman and Steven Mackenroth and script by Glenn Allen Smith, was blessed with vitality and a knockout performance by Tallman as Manny. However, the actors and fine production could not hide the unhappy fact that Manny is burdened with a confusing script and flat musical numbers.

This latter reality is threatened by the entrance of Canzada’ grown son, P. J . The character is one-dimensional and played so, which is regrettably theplay’s great weakness—no one could possibly be quite that dreadful. P. J. manages to cause great havoc before his mother rejects him in order to preserve the remnants of her new family.

One of Haven’s great strengths is his ability to grant his heroine a number of inconsistencies and faults. Yet, whatever her failures, in the hearts of her three men he has found her equilibrium, and for the play’s duration we are allowed to share it.

Playmarket’s offering for children was a musical play, Road to Yonder: the Boyhood Adventures of Abe Lincoln by Pamela Jensen, with music by Carolyn Pines. (I should add here that Jensen and Pines, both graduate students at Trinity, are two of seventy students who double as DTC apprentices for a minimum of two years, combining academic exercises with practical experience. Once these students earn their MFAs, they may become journeymen with DTC. Of the present 30 journeymen, some may eventually be asked to join DTC, which consists of 30 members who not only act in repertory but also perform just about every other conceivable task required to maintain and publicize DTC-no mean assignment.)

Back to Jensen. She is a beginning playwright who haws great promise. The play begins with an adult Lincoln reminiscing about his boyhood, especially the influence upon him of his mother, Nancy Hanks, played with surety by Joslyn Anderson. Road’s components—drama, music, pageantry—are ill-matched, although taken singly they are adequate and often beguiling. Jensen most finely exhibits her dramatic skills in a superb scene where the young Abe befriends a terrified runaway slave. In less sure hand this might have been an irresistible opportunity to lapse into triteness. To her great credit, Jensen casts away stereotypes and presents two frightened, honest young men reaching out to each other and to us.

Pine offers a plethora of songs, some of which were how toppers; but too many, though fine in themselves, get in the way of the play. Ihad the uneasy suspicion that the creator of Road felt compelled to break the really meaningful action with bright production numbers and too many doses of showbiz bubbles. It left me with two desire’s. First, that the producers of children’s plays overcome their own timidity, and second, that Jensen show more pluck in her writing.

We always hear the cry, “Where are all the new writers, actors, and directors to come from? How we need them!” Very few producers bother to answer the question so easily asked. Paul Baker and the DTC not only answer it, they also live it, by putting their faith in new talent where it counts—not on paper or a TV interview-but on a stage.

And P.S.: they still pay the rent.