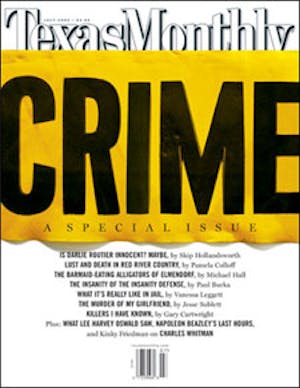 1) Who came up with the idea for a special crime issue?

2) Were you immediately interested in writing for the special issue? Why or why not?

MH: Yes. Crime stories are almost always the best—the weirdest, saddest, funniest. You can get down to the moral, human stuff.

Pamela Colloff: I’ve always been fascinated with crime stories, because they always have such complicated characters. Criminal behavior usually involves breaking some sort of taboo—taking a life being the most obvious example. I’ve always wanted to understand what compels people to commit murder.

3) Did you decide on the story that you wanted to write for the crime issue? If so, why did you pick the story you wrote?

PC: Yes, I picked this story. Ever since January, when I read that Curtis Gambill and Josh Bagwell had escaped from jail, I wanted to know more about them and the crime they committed. And the more I found out, the stranger and more complicated it got.

MH: Yeah, but I’d never heard of Joe Ball until Chester Rosson told me about the myth of the guy who fed the waitresses to the gators in the tiny town of Elmendorf, where he had lived many years before when he was in the second grade.

4) What is the hardest aspect to writing a true-crime story? Why?

PC: When a child has been murdered, as was true in this story, the pain of the victim’s family is almost too overwhelming to be around. That was difficult, as was seeing the autopsy photos of Heather Rich. This was a brutal crime, and those images were hard to forget.

MH: You have to have some distance to deal with the tragedy involved. If alligators had eaten my sister, I wouldn’t have found the whole thing so kitschy. But because it happened 64 years ago, it takes on that true-crime, noirish tint.

5) What kind of research did you do for this story?

MH: I went to the San Antonio Public Library, the Center for American History, and the Institute of Texan Cultures, where I found a bunch of old newspaper clippings and stories. I went to Elmendorf four times, stopping three times at the church annex of St. Anthony’s to talk to the old folks who eat there every weekday morning. Plus I did several phone interviews.

PC: I read two trial transcripts, and I spent a great deal of time in the Red River area, talking to people there. I also interviewed everyone I could think of—from law enforcement officers, to anyone in Waurika who knew Heather—until a portrait of her and her killers began to emerge.

6) How long did you work on this story?

PC: On and off since January, when Gambill and Bagwell escaped from jail.

7) Is working on a crime story different than other stories? If so, how?

PC: One of the most difficult things about this story from a reporting perspective was that the main person I was writing about, Heather Rich, was dead. Few of her friends would talk to me. And I was not allowed to interview Gambill or Bagwell, because they posed a flight risk in prison. This was a tough one to report.

MH: There are always more details, more people to interview, more stuff to read. There’s always more back story to research, because so many other people are fascinated by crime so they’ve already written about it. And sometimes, way back in your mind, you have to worry some about your safety—I’ve done a couple of crime stories where I was at crime scenes and at least one where I hung out with a crazy killer. Yikes!

8) What did you find to be the most interesting thing about your story?

MH: The way the presence of alligators can make people imagine just about anything.

PC: That a seemingly safe, tranquil town had so much mischief going on in it.

9) What was the most surprising? Why?

PC: I was surprised that Heather’s mother was able to forgive Randy Wood for what he did. She is a very strong woman.

PC: I don’t think that we’ve heard the last from Curtis Gambill or Josh Bagwell.