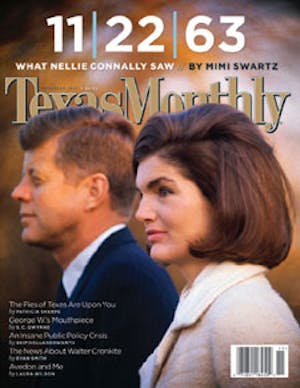 texasmonthly.com: Tell me about your experience shooting the mentally ill for Skip Hollandsworth’s story.

Beth Perkins: It was one of my favorite jobs this year. There’s such a human element to it. In three days I was able to spend time with different kids just talking to them, and they were very open with me. There was one kid—I wasn’t allowed to photograph his face—he was a mess but he was very nice. He’s the one in the article with the messed up arms. He had a lot of scarring.

I felt like it was a privilege that these kids allowed me to enter their lives and tell me what they were going through.

texasmonthly.com: How do you prepare for your photo shoots and how does that tie into the style you use?

BP: A lot of my preparation is figuring out how to find out as much about my subjects as possible. So I know a little bit about them in order to make them as comfortable as possible.

texasmonthly.com: You do both advertising and editorial work. What is the difference for you and do you have a preference?

BP: I think each job requires something different. For instance, the Texas Monthly job I did by myself. I didn’t want to scare the kids or make them feel uncomfortable. Three or four days later, I shot for Volkswagen and I had three assistants and a producer. These are totally different ends of the spectrum. Both were fun, but it was more food for the soul to do the Texas Monthly shoot. Volkswagen was such a great experience because there were so many people behind making an image. You become more of a director in this instance because you have a staff under you and you’re collaborating with an art director and an ad agency. So there’s much more pre-production.

texasmonthly.com: When you are working, do you wait for the perfect shot or do you pre-set things?

BP: The way that I shoot is entering the situation and finding that moment that falls into place, sometimes I ask someone to redo something if I don’t catch it the first time. I take a lot of film because if I’m trying to catch a moment, I’ve got to have a lot of film. The more I’m doing it, the more I’m able to anticipate and premeditate a little bit. I try and keep it as real as possible. The challenge for me is doing advertising. Everything is so premeditated that once it’s all set up, it’s up to me to get people to behave naturally.

texasmonthly.com: Ten years from now, what would your dream situation in life be?

BP: I guess I never really thought much about it, but I have to say that this year has been my dream situation. From doing Technology Review to Volkswagen in one month, I can’t imagine having a better year—just the diversity of what I’ve gotten to do. So, in ten years, I hope I’m doing the same things I’m doing now and that it’s still as exciting.

texasmonthly.com: What brought you to become a photographer?

BP: I took a couple of photo classes in college. I really liked it. I always felt I could be a painter. I don’t think at any point did I say, “When I grow up I want to be a photographer.” I moved to New York on a whim to get out of Texas, and I was very fortunate. Within the first week I was here I got a job working as the assistant to the fashion director of GQ.

Then Jim Moore took over the position, and I became his assistant—he was much more involved in the shoot. I was going on shoots with him and carrying clothes and ironing clothes. It was total boot camp.

I took a month off to regroup and find out what I wanted to do. One of my really good friends who is a photographer, Carter Smith, called me up. He shoots fashion. I started working for him as a photo assistant, and I also started doing administrative work for his custom color printer, where I learned the basics for color printing. That’s where I got a lot of technical experience. You have no idea how many nights I spent learning the cameras. As Carter became more well known, I became his first assistant. I was able to pull in really good assistants and draw more experience from them. In the mean time, I was still printing quite a bit.

texasmonthly.com: It looks as though you had a lot of helping hands guiding you along the way. Do you have any aspirations to mentor?

BP: Yes. I feel like I got so many great opportunities to work with people who wanted to teach me. Even in custom color printing. I’d be happy to share my experiences and help somebody else get started. But I think that if somebody wants to start taking pictures, the best thing to do is just start taking pictures. The more you shoot, the more you see that film reacts. Initially, I shot my parents and my friends because I was very comfortable with that.