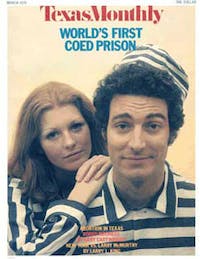 THE GERMANS BROUGHT MORE THAN tenacity and thrift to Texas. They came equipped with a culture rich in a tradition of good food and good fellowship which has survived the onslaught of Indians, droughts and the Republican party. Today a visit to Fredericksburg or New Braunfels will reveal an intact German culture replete with restaurants unlike those found anywhere else in the state. And, unlike other Americanized cultures who reserve the old country cooking for feast days, Texas Germans cook German style daily. The basic ingredients are readily available in any supermarket and can provide an interesting change of pace.

Being primarily agrarian, Hill Country Germans spend a good portion of their time processing foods from their own gardens. They have not lost the art of canning. Although most of us wouldn’t know a pill bug from an earwig in the garden, we can incorporate the old country methods with fresh vegetables from the market and come up with interesting variety at our tables. One of the most striking elements of the German dinner is that it is bountiful. Tables groan with homemade breads, home preserved fruits, home canned vegetables and home butchered meats. We couldn’t eat that way all the time without bursting at the seams—but for a special occasion, it will provide a feeling of abundance which is well worth the effort.

A German dinner party given in a Dallas high-rise by a bachelor who likes to cook can be accomplished easily because most German dishes are prepared ahead, then served when the moment seems right. Texas-Germania might well become the tour de force for the single Texas epicure who has eaten in every fine restaurant and is ready to entertain at home.

One restaurant owner in Fredericksburg, recently transplanted from Corpus, tells of the time she phoned in an order to the grocer then asked him to read it back to her. He droned on in the meticulous, accurate way of a German merchant but she was jarred when he came to “vine winegar.” The use of vinegar in German cooking can be compared to the use of wine by the French. Acidity of both products breaks down fibers and tenderizes the food. Using vinegar instead of wine, however, demonstrates the absolute thrift, the save-everything attitude that the Germans have—even the wine which has soured is used. Add health-consciousness to the list of German cooking virtues, for adding vinegar to the meat bones releases calcium which can be utilized by the body. If you have wine which has gone sour, keep it. In fact, you can mix up several different left over wines in one bottle and have for yourself a good “vine winegar” for cooking.

And speaking of thrift, the Germans on our street even have fewer garbage cans! In fact, Texas Germans found in the Hill Country appear to be less affected by the rank consumerism of the mainstream of American life than any group around. Texas Germans know who they are and what they are about. This security has allowed them to preserve an old country culture so beautifully that one can easily see evidence of it in the present day cooking habits.

THE TEXAS GERMANS ARE WAY ahead of us in the natural foods revolution. Just now as we are becoming aware of harmful additives and refinements which increase the shelf life of foods but may decrease the life of the consumer, the German style of cooking seems even more valuable. Below are listed a few basic German dishes—all of which can be made from scratch, have no additives, high nutritive value, and most significantly—better taste. Cooking is largely a matter of habit and if one or more of the following appeals to your needs, you might incorporate it into your regular cooking routine.

One piece of equipment which appears regularly in German recipes is a crock. If you didn’t inherit one from your grandmother, you’ll be pleased to know that they’re still for sale at the hardware store, reasonably priced and very antique looking. I think a kitchen is warmer looking with the good looking tools of the trade displayed.

Wash and peel cabbages, removing outer leaves. (The number depends on the size of the crock. A #2—which means two gallon—will hold six heads). Remove core and shred. Place in stone crock in approximately three inch layers. Sprinkle with 1/4 cup salt for each gallon of shredded cabbage. Repeat layers until the crock is full. Press down as the salt wilts the cabbage so that it is packed in tight. Over the top layer, place a plate the size of the crock opening and place a ten pound weight on top (like a rock or brick—no metal). Cover with a tea towel and set in a cool, dark place (note that refrigeration is not called for). Leave in the dark place for nine days. Check and skim off any mildew daily. You may keep the kraut in the crock for several weeks. Or you can place it in sterilized pints and seal. Heat the kraut to boiling, fill the hot, sterile jars and fix the pre-sterilized rings and flats on tightly.

If you have never put food up in jars the best directions can be found in any Better Homes and Gardens cookbook. It’s really quite simple—the primary requirement being sterile containers and a clean rim so that the jar will seal properly. You can hear the flats pop as the seal is formed. After the jars are cooled, if the flat is not inverted, it didn’t seal and should be refrigerated.

Germans are the champion pickle and relish makers of all time. One of the most delicious side dishes to serve with red meat is pear relish. You can get Kiefer pears or ugly, hard ones for this. The ones with the rosy cheeks cost too much.

Grind all ingredients through a food chopper. (If you don’t have one of these gems, you can chop fine by hand). Bring to a boil slowly and boil for 30 minutes. Seal while hot in sterilized jars. This will keep a year or so and would even make a nice gift.

For a real treat which will surprise those you’re feeding, how about:

Beat the eggs until Iemon-colored, then combine with water. Sift together flour, salt and baking powder into large mixing bowl. Make a well in the flour mixture and add the liquid. Stir until the flour is thoroughly wet. Make a stiff dough. Add flour if necessary to stiffen. Knead for ten minutes on a well-floured board, let rest two minutes then roll dough into two very thin sheets. Set aside for three hours. Turn sheets several times while drying. Cut into narrow strips. (Did you ever see your grandmother’s noodle cutter? A small roller with several cutting edges). Drop into boiling, salted water and cook 20 minutes. Serve with butter, or however you generally use noodles. What you don’t cook, you can put into a plastic bag, close with a twistee and save for later use. These will keep well in the cabinet provided they are properly dried before storing.

IF YOU’D LIKE TO GIVE a German dinner party, the first bit of advice would be—don’t eat for three days preceding the party. German food is delicious, heavy and filling. This meal is a typical example, and a great one to start with:

Three days preceding the dinner you start the:

Place meat in crock or pyrex container large enough to allow meat to be covered by liquid. Combine remaining ingredients except butter and gingersnaps and pour over meat. Cover and let stand for three days. (Notice that refrigeration is not called for.) Turn meat every day. Remove meat on the third day and drain. Brown meat in butter over low heat. Gradually add all liquid and spices to meat and bake slowly in a 300 degree oven for three hours. While roast is baking, crush ginger snaps. A blender works very well for this job. When meat is cooked, remove to a hot platter. Strain juice into a small saucepan, skim grease off, heat to boiling and combine with crushed gingersnaps to make gravy.

Two days before your guests arrive begin the:

Skin the herrings and soak overnight in water. Drain. Peel and slice onions. Mix vinegar, water and spices. Dissolve the juice of the herring in a little of the vinegar mixture and add to the sauce. Pour over herring. Cover and set aside at least 24 hours before serving.

Combine cocoa, salt and sugar. Cream butter and vanilla. Combine sugar mixture and cream mixture a little at a time then beat two minutes at high speed with an electric mixer. Spread on cooled cake. Heavenly.

Another item to prepare the day ahead is—the fixin’s for:

Just before you’re ready to serve, fry the potatoes in bacon drippings in one skillet and the onions in bacon drippings in another until they turn clear. Pour onions over the fried potatoes, season to taste with salt, pepper and generous amounts of paprika. Mix and serve on hot platter (can be placed around the Sauerbraten on the same platter).

You can also do the chopping the day before for:

Wash cabbage and cut fine the day before serving. Peel and slice onions. Peel and chop apples. Pour juice of the lemons over the apples. Place in three separate airtight containers and store cabbage, onions and apples in the refrigerator until the night of the dinner.

On the day you’re serving the only remaining item to be made from scratch is:

Mix cucumbers with sait and let stand an hour. Drain thoroughly then add remaining ingredients. Serve at once.

For best results, do not substitute margarine for butter, reconstituted lemon juice for fresh lemons, or distilled white vinegar for wine vinegar. Natural ingredients make that subtle difference between good and great cooking.

Now, there are still many things
Where one wonders: When? How? and Where?
But observe well how others cook it
And cook it possibly like so.

If you would like more authentic German recipes like these, write the Fredericksburg PTA Cook Book, Fredericksburg, Texas 78624, send a check for $4.16.