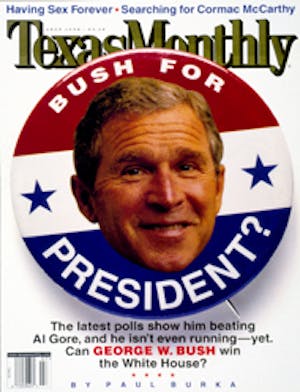 Photographs by Scott Hunt are not available on-line.

BETTER THE ENEMY YOU KNOW THAN THE one you don’t. Americans are fighting millennium phobia with a hefty dose of World War II nostalgia, harking back to an era when good was good, bad was bad, and the country pulled together and prevailed. Hollywood brass are polishing a spate of war films, including Saving Private Ryan, a Steven Spielberg production starring Tom Hanks, and The Thin Red Line, the first film in twenty years from Austin-based director Terrence Malick. Younger generations are discovering the swinging sound of big-band music at elegant venues like Dallas’ Adolphus and Fairmont hotels. And in Texas and elsewhere, twentysomethings to fortysomethings are spending their weekends donning olive drab and recreating World War II assaults on land, in the air, and on the sea.

One of them is Dallas photographer Scott Hunt, who first played soldier two years ago on a lark. To his surprise, World War II took him by storm. “I was familiar with it mostly because every night when I was growing up there was a John Wayne war movie on TV. But the reenactments brought home a certain sense of reality.” He was inspired too by heroic stories from his own family history. His paternal grandfather, who has “a wallful of medals,” fought overseas, as did eight of his grandfather’s siblings—and all nine made it safely home.

Hunt acknowledges that he and his fellow reenactors are “grown men playing cowboys and Indians, but still, we take it very seriously.” One concern: “A lot of these guys are aware that this hobby walks a fine line between something acceptable and something considered paramilitary.” But World War II reenactors are fanatical only about authenticity. Participants must use original uniforms and weapons or exact replicas, and battle strategy is carefully choreographed to mirror the real engagement. The thirty-year-old Hunt wholeheartedly embraces the restrictions; for example, he switched from modern eyeglass frames to vintage steel rims (which happen to be currently fashionable). More proof that he’s thoroughly hooked: His phone number ends in “1942.”

When Hunt sought permission from the Texas Military Historical Society, the reenactors’ sponsoring group, to shoot pictures at various staged battles, he learned that even his modern equipment was unwelcome. “Most military photographers used a four-by-five camera,” he says. “Big and clunky. So I cheat just a little. I use a two-and-a-quarter-inch twin lens reflex, basically the same style and design used in World War II but made in 1986. Of course, it now says ‘Yashica’—I have to cover up the name with a piece of black tape.” Naturally, he shoots entirely in black and white.

For the twelve pictures on these pages, Hunt participated in several events around the state, including large-scale combat exercises at Camp Swift near Elgin, east of Austin. (“The U.S. Army lets us play on federal property.”) He photographed a beach landing during last fall’s Pacific Fury in Galveston, which drew 250 “soldiers,” both American and Japanese, as well as 12,000 spectators. The troops may be pretend, but Hunt’s images have undeniable power. While conveying the fear and action of real war, they also evoke a sense of longing for what was, in a way, a simpler, saner time. Those emotions underlie the resurgence of forties fever. As Hunt sees it, “World War II was the last time this country was truly whole.”