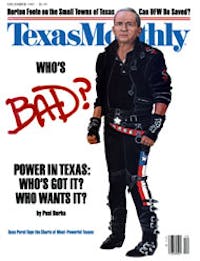 Winter is the hunting season. As dawn breaks pink and gold above ponds and marshes across the state, the pop-pop of guns echoes through woods and across fields. Huge flocks of migrating geese and ducks wing their way from Canada and the Arctic across the pale skies in Texas, one of the most abundant waterfowl areas in the country, nearly 80,000 bird hunters bring down more than 600,000 geese and ducks a year. Five to six million mourning doves, 12,000 snipes, 8,000 woodcocks, and 5,000 sandhill cranes are shot by Texas hunters annually.

Bird hunting is today a luxury rather than the necessity it was for our ancestors. Those of us who have been fortunate enough to taste properly cooked wild goose, duck, or dove know of its pleasure. For many, however, cooking wild game birds remains a mystery and a trial. Alas, overcooking — especially of the most popular game birds, the aforementioned red-meat birds — is an all-too-common mistake. Sophisticated cooks, those who really appreciate a game bird’s rich taste, know that the best way to cook a goose, duck, or dove is simply and quickly, at high heat, and only until rare, or, at most, pink. Too many cooks — out of tradition, fear of wild meat’s “uncleanness,” or their dislike of the so-called gamy flavor — believe it is necessary to somehow purify the animal or camouflage its flavor by long and complicated cooking.

What a shame to ruin such an exquisite natural food, a perfect seasonal dish unavailable in restaurants or markets. It hardly seems proper to sacrifice an animal for sport and then treat it as if it were distasteful. Wild fowl may be an acquired taste; the flavor is distinctive and, yes, gamy, unfortunately a pejorative word. But once one’s palate has become acquainted with the true and unadulterated flavor of a moist and tender game bird that has been feeding on rice, grain, wild berries, or herbs, domestic meats seem bland, fatty, and chemical-tasting.

A wild goose, for instance, tastes like rich rare roast beef, only better. The pink flesh of a duck, dove, or even the lowly snipe has a delicate texture and a deep, full-blooded flavor that can become addictive. The woodcock, a small quaillike bird that is similar to the snipe and inhabits the Piney Woods, though not greatly hunted in Texas, was thought by no less an expert than John James Audubon to be the tastiest of all game birds. It is cooked whole and undrawn (without its entrails removed). The French, who know about these things, scrape out the cooked entrails, mash them up — perhaps with a bit of cognac — and then spread the mixture on toast. The sandhill crane, a wary, long-legged migratory bird viewed with disdain by many hunters, is considered by other hunters to be great sport as well as a flavorful meat, tasting something like dark turkey meat. This is not to overlook the quail, pheasant, and wild turkey found in Texas, but they are white-meat birds and can be cooked similar to the way that chicken is cooked. What we are considering here are the red-meat birds (whose flesh is more akin to beef) and the widespread misunderstanding about how to cook them.

A number of game cookbooks, for instance, contain all sorts of nonsense guaranteed to intimidate even the more adventurous gourmets. “Most good game cooks like their birds cooked well done,” declares one Texas book, which goes on to advocate baking or braising them in a heavy sauce in a moderate oven for hours. Braising the bird in a sauce of canned mushroom soup and the like, a traditional method for cooking wild birds in Texas, produces okay results. But because game birds have little fat — unlike domestic geese or ducks — they really must be cooked quickly. Otherwise they might lose moisture and become tough and tasteless. Another cookbook counsels, with obvious disgust for the birds, that geese be bled on the field, soaked in salt water overnight with the fat cut away, and baked at low heat interminably, all good ways of destroying the taste. Another good way to ruin the flavor of game birds is with strong marinades of cognac and wine.

“People ask me, ‘How do you get the gamy flavor out?’ ” says Robert Del Grande, the chef and owner of Cafe Annie in Houston. “I tell them, ‘First, buy a chicken. Second, throw the game birds away.’ ” Del Grande frequently prepares game brought in by his customers, and though many of his clients are seasoned hunters, he often has to “nurse them along” at first in the appreciation of pink birds. Del Grande marinates his birds in oil “to get the moisture content up” and then roasts them for twenty minutes or less at high heat, up to 500 degrees for very small birds. He serves them pink, rare to medium rare. The broiling recipe we are recommending is even hotter and faster. It’s simpler too. The only difficulty is finding some geese or ducks.

Until 1901, when federal laws prohibited the commercial harvesting of migratory birds, it was possible to purchase wild game birds in meat markets. Nowadays, for those who do not hunt, the only way to procure the birds is to beg them from a generous hunting friend or relative. The goose harvest was poor last year, and it is expected to be not much better this season. But of the geese, speckle-bellied and Canada geese are considered the best eating, though the snow goose is good too. “I’m not aware of any goose that’s not good to eat,” says Dale Witt, Texas Parks and Wildlife’s program director for migratory and endangered species. Among the ducks, the canvasback, which feeds on wild celery and which in the nineteenth century was served as a delicacy at Delmonico’s in New York, is called the king of birds, but in recent years its numbers have drastically declined, and shooting canvasbacks is now illegal in Texas. The small blue-winged teal is coveted by many hunters for its particularly sweet flesh. Mallards, pintails, wigeons, and gadwalls, depending on whether they have been feeding on rice stubble and grain or on aquatic life along the coast, are also sought after. In general, ducks that feed on aquatic animals, fish, or plants are held in low regard because their flesh is considered to have an unpleasant flavor. I did sample a broiled coastal duck recently, however. With its oily, fishy aroma (reminiscent of mackerel), the bird was unusual but quite tasty.

After acquiring the birds, the next step is cleaning them. Most expert hunters clean their own birds, but there are also cleaning services in areas where hunting is extensive. John Makin, an executive chef for the Crescent complex of restaurants in Dallas and an avid hunter himself, recommends that during warm winters, when the temperature is higher than 60 degrees, game birds should be cooled immediately and even plucked in the field to keep them from spoiling or becoming excessively gamy. Other hunters scoff at this precaution, preferring to leave their uncleaned birds in the refrigerator for several days to intensify the flavor, an aging and ripening process that is similar to the traditional “hanging” of game birds, in which fowl are suspended from hooks in cold air for as long as a week or more.

Once cleaned, the bird is ready for its brief stay under the broiler. Years of kitchen training are not at all necessary: no elaborate sauces, no complex marinades, no ritual bastings. Just a pan, an oven, and a willingness to try a taste free of disguise and adulteration. Not everyone can go out and shoot a wild goose or duck for dinner. But certainly just about anyone can cook one.

The following recipe is adapted from the straightforward method of broiling game birds used by Robert McCurdy, an Austin sportsman and the executive director of the Clear, Clean Colorado River Association, who has made the quick-cooking of game birds an art. Accompanying it are recipes for a suitable side dish from Robert Del Grande and a sauce from John Makin. Other recommended accompaniments include fried polenta, braised cabbage, fruit compote, baked grits, and, of course, wild rice.

One goose, depending on size, will serve two or more people. A duck generally serves one. Cleaned game birds should not be washed (it damages the skin) but may be wiped with a damp cloth.

Preheat broiler. Bird should be at room temperature. Sprinkle breast liberally with salt. (Del Grande sometimes rubs ducks with a mixture of salt and sugar to help caramelize the skin during broiling.)

Place duck or goose breast side up in a shallow roasting pan under flame, and broil until skin is dark and crispy. Ducks, depending on their size, should be placed about four to five inches from flame and geese about six inches. If bird doesn’t fit in broiler, cut its back open and spread breast side up in pan.

Turn bird over and broil back until skin is dark and crispy. Remove duck from broiler when juices run red to pink —— depending on rareness desired —— usually after about ten minutes or less total cooking time. Because of its size, a goose should be allowed to sit in the broiler with the flame turned off until done, which might be another five to ten minutes. Juices should be reddish. (Think of it as roast beef.)

Dove, woodcock, and snipe can be cooked the same way, though woodcock and snipe are cooked whole, heads and all, with eyes and gizzards removed. All three birds, because they are so small, take considerably less time to cook, only a few minutes, and must be placed closer to the flame, about three inches.

Birds may be flamed with cognac or gin as soon as they are removed from the oven. Remember, though, that they will continue cooking from their own internal heat and so should not be left on the plate. Be prepared to eat them immediately.