texasmonthly.com: Tell us a little about yourself.

O. Rufus Lovett: I am originally from Jacksonville, a small college town in the foothills of Northeast Alabama, where my mother was an English professor and where my father also taught and was the university photographer and a portraitist. My sister is an artist living in Milwaukee. I’ve been married to my wife, Frances, for 28 years, been teaching photography at Kilgore College for 27 years, and been on the board of directors of the Texas Photographic Society for 12 years. I am also the director of the Image Gallery in Longview.

texasmonthly.com: What made you decide to go into photography?

ORL: One of my earliest fond memories as a child was peering over my dad’s print-processing sink watching his magic appear before my five-year-old eyes. It was under his tutelage and as his apprentice during my high school football-player-want-to-be days that my dad convinced me that the girls are just as interested in photographers as they are in football players. (I really think he wanted me to give up football because he had seen me play.) Anyway, it was my dad’s patience and teaching ability that initially spirited my interest in photography.

texasmonthly.com: Who are some of your photographic influences and why?

ORL: Aside from my dad, I would have to say there have been many photographic influences throughout my career. I think all of us photographers can’t help but be influenced by what we see from others’ work and what we read and what music we listen to and what movies we watch. But I must say, as a photography educator, my most significant influence would have to be one of my college photography professors, John Beck. A wonderful photographer and a great educator, he taught me to control the craft of black and white photography and most important, perhaps, how to enjoy learning through his teaching. The opportunity I had to study and work with Ansel Adams at his workshops in the early eighties certainly has influenced my work. Then it wasn’t long until I met Mary Ellen Mark, whose approach with the human condition is absolutely extraordinary.

texasmonthly.com: What was the first photo you were really proud of?

ORL: Photographer Michael Kenna told me once that his photographs are like his children, and one would have to say that one loves all one’s children equally.

It’s hard to argue that point, but one of my images does come to mind, and that would be the Rangerette High Kick picture I made, which was the first picture of mine that was published by Texas Monthly, in 1990, and became rather popular and soon was published nationally and collected in several public and private venues.

texasmonthly.com: How do you define your “style” as an artist?

ORL: I think my style as a photographer is very basic and straightforward and hopefully offers a personal interpretation to the human condition. I prefer not to force a particular style but to allow the nature of the subjects to project a sense of honesty. I enjoy composing my images in the camera as opposed to post-visualizing a composition later. So, as far as recognizable style in my work, I suppose it would be the black and white full-frame square image that I make at the camera rather than in the darkroom later. But that part of my style is not that unique, as many photographers work that way.

texasmonthly.com: With the Aggie bonfire, what did you want to capture in your photos?

ORL: I wanted to capture the sense of organization, discipline, and hard work this intense student body is performing in the name of the tradition that they believe in so greatly. It was the construction of the bonfire that I concentrated on the most because it was the construction that has raised so much controversy.

texasmonthly.com: Is there one photo that stands out in your mind from that experience? How do you think you captured the Aggie spirit?

ORL: There is one portrait that I made of a female student who had just chopped a tree down to be added to the stack for the fire. Her female classmates are all around her as she stands on the stump holding the axe appearing rather stoic, all rendering a sense of pride for the tradition to which they all seem so strongly bonded. It was the least spontaneous picture I made of the event, but perhaps adds variety to the other candid interpretations.

texasmonthly.com: Had you been to the bonfire before? If not, what were you expecting to find versus what happened?

ORL: I had never been to an Aggie bonfire before and was surprised to find such a well organized group of students who were extremely conscientious regarding safety procedures. Each move by the laborers was dictated by a commander shouting orders followed by precision moves in unison by the workers. One of my photographs captures the shouting of an order as the other students strain to carry a twenty-foot tree.

texasmonthly.com: How do these photos differ from what you normally take?

ORL: Each assignment dictates a new set of possibilities, so what one “normally takes” may become irrelevant when moving on to the next job. However, working spontaneously as I did documenting this project is exciting in that it brings out one’s intuitive nature to define and construct quickly with the camera.

texasmonthly.com: What’s your next project?

ORL: I always have several personal ongoing projects including the Weeping Mary, Texas, project, the Southern Claus (Santa Claus) series, and I’ve begun documenting the Kilgore College Rangerettes again. I have a fascination with southern icons such as the Rangerettes and homecoming kings and queens. Thanks to this last project with Texas Monthly, I have a feeling I’ll be occupying my future weekends before Thanksgiving with the Aggie bonfires. 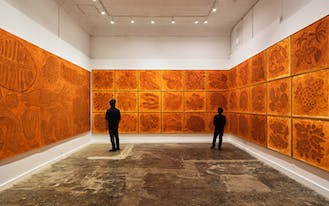