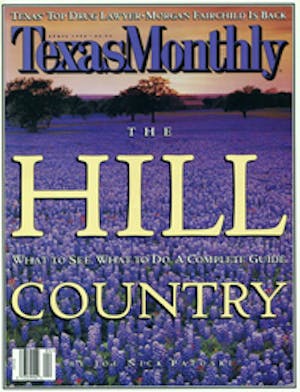 Houston attorney-novelist Eric L. Harry flashed on the idea for his new technothriller while rafting on a river. In Society of the Mind (Harper Collins, $25), due out in June, a mad genius lures a young Harvard professor to his secret island compound to psychoanalyze an equally disturbed computer…New York publishers are fawning over the latest book by El Paso writer Benjamin Alire Sáenz. After last year’s ambitious novel Carry Me Like Water lived up to its beautiful, mystical cover, six bidders have lined up for his follow-up, An Old God Never Dies; due out later this year, it is the story of a Hispanic woman whose childhood abduction has isolated her from her ethnic roots…A new novel from Sandra Brown debuts every summer. This June’s offering is Exclusive (Warner Books, $22.95), which the Arlington writer says is about a broadcast journalist who gets a tip that a child whose death was attributed to sudden infant death syndrome may in fact have died of other causes. “The tip comes from the first lady,” Brown reveals, “and the baby was hers. I thought it sounded like a good tale for an election year.”