Whether you’re enjoying icy oysters on a cold, winter night or you’re sitting through another relative’s diatribe about the economy, we’ll give you something to talk about.

If you’re out for oysters . . .
They aren’t gonna be from Texas. As USA Today‘s Rick Jervis reported, the state’s oyster harvest was cancelled on November 1 because the Gulf has been invaded by “red tide” algae, which makes the oysters unfit for human consumption. The mollusks are also facing down a parasite called “dermo,” which doesn’t hurt humans, but kills oysters. “It’s the most I’ve ever seen of it and in areas I’ve never seen it in before,” Sammy Ray, a Texas A&M-Galveston shellfish toxicologist said. “Nothing’s going to stop it until we have a big flood.”

If you love voting . . .
Then you’re in luck. Nate Apple of the San Antonio Express-News reported that a deal might be in the works to split up Texas’ 2012 elections in the wake of all the various redistricting-related delays. A March 6 primary for the House, Senate and US Congress is practically impossible since the courts have yet to finalize a map. But some political observers believe that Governor Rick Perry’s presidential campaign does not want the Texas primary to be pushed back because he needs the momentum from a win in his home state, which would mean other offices couldn’t get on a ballot until much later.

If your uncle is complaining about the economy . . . again . . .
Good news! No less an authority than Republican state treasurer Susan Combs declared the recession to be over. But here’s the bad news: Combs still thinks Texas will have to tap the Rainy Day fund in 2013. In an interview with the Associated Press, she largely blamed the federal government and its policy on Medicaid. “That is the fungus that will eat the planet . . . that is a national problem,” Combs said of the health insurance program for the poor and disabled, which was deliberately underfunded by $4.8 billion in the coming state budget cycle.

If you hate the BCS . . .
Then remember, there’s a brand of college football that actually has a playoff. Ronnie Turner of the Houston Chronicle previewed the FCS semifinal game in Huntsville tonight, as number one-ranked and undefeated Sam Houston State continues its quest for its first-ever national championship against the University of Montana, a seven-time title winner. Should the Bearkats win, they’ll advance to the championship game at Frisco’s Coca-Cola Park on January 7.

If it’s time to book that trip to Big Bend . . .
After ten years, the Boquillas Crossing from Mexico is scheduled to reopen this spring with an automated kiosk that will scan identification and allow visitors to check in with customs officers remotely. Read our post from Tuesday for all the details, but first, start the weekend with some tuneage by Robert Earl: 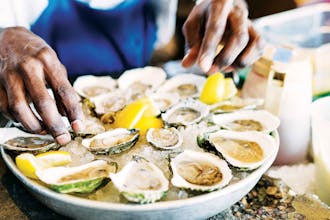 Where to Slurp on Raw Oysters This Valentine’s Day