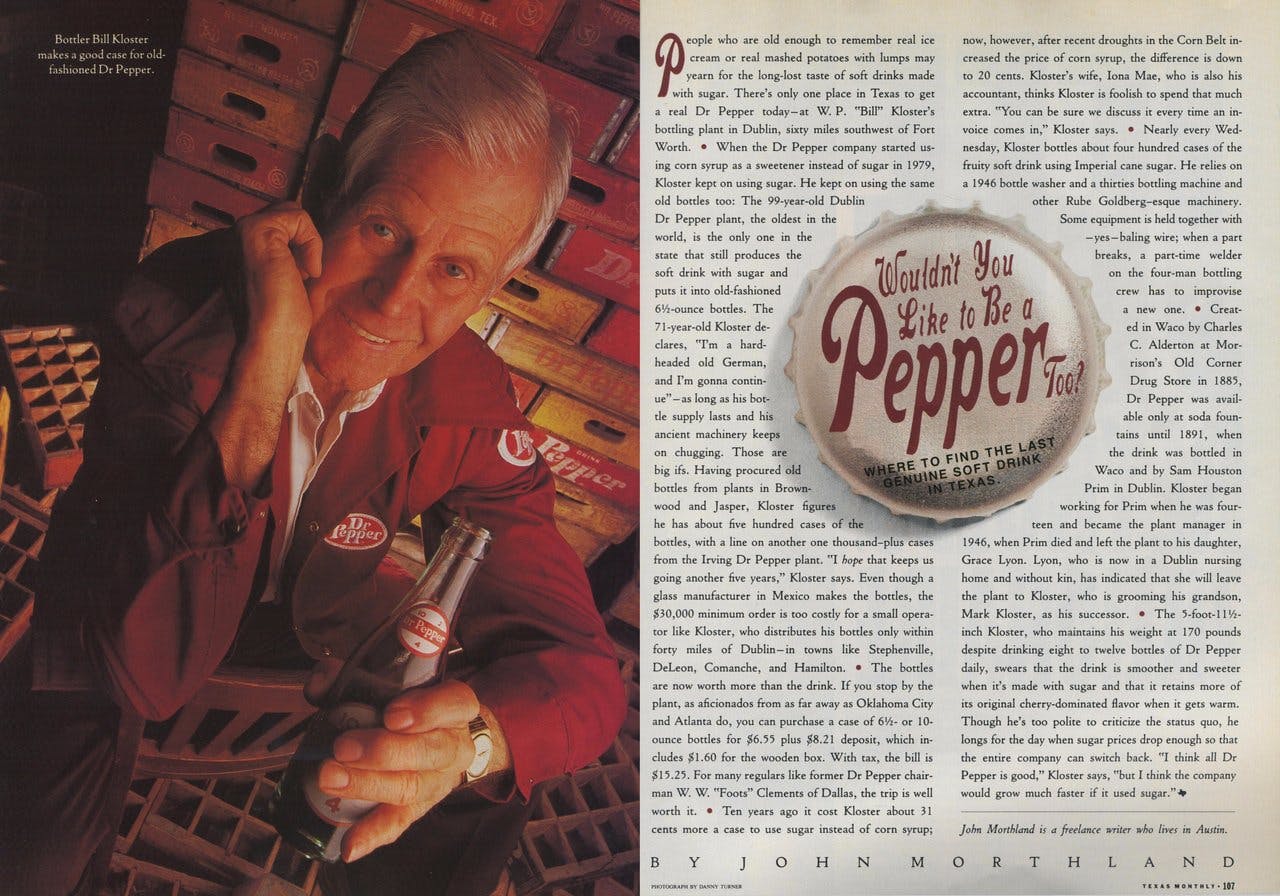 People who are old enough to remember real ice cream or real mashed potatoes with lumps may yearn for the long-lost taste of soft drinks made with sugar. There’s only one place in Texas to get a real Dr Pepper today—at W. P. “Bill” Kloster’s bottling plant in Dublin, sixty miles southwest of Fort Worth.

When the Dr Pepper company started using corn syrup as a sweetener instead of sugar in 1979, Kloster kept on using sugar. He kept on using the same old bottles too: The 99-year-old Dublin Dr Pepper plant, the oldest in the world, is the only one in the state that still produces the soft drink with sugar and puts it into old-fashioned 6½ ounce bottles. The 71-year-old Kloster declares, “I’m a hard-headed old German, and I’m gonna continue”—as long as his bottle supply lasts and his ancient machinery keeps on chugging. Those are big ifs. Having procured old bottles from plants in Brownwood and Jasper, Kloster figures he has about five hundred cases of the bottles, with a line on another one thousand-plus cases from the Irving Dr Pepper plant. “I hope that keeps us going another five years,” Kloster says. Even though a glass manufacturer in Mexico makes the bottles, the $30,000 minimum order is too costly for a small operator like Kloster, who distributes his bottles only within forty miles of Dublin—in towns like Stephenville, DeLeon, Comanche, and Hamilton.

The bottles are now worth more than the drink. If you stop by the plant, as aficionados from as far away as Oklahoma City and Atlanta do, you can purchase a case of 6 ½- or 10-ounce bottles for $6.55 plus $8.21 deposit, which includes $1.60 for the wooden box. With tax, the bill is $15.25. For many regulars like former Dr Pepper chairman W. W. “Foots” Clements of Dallas, the trip is well worth it.

Ten years ago it cost Kloster about 31 cents more a case to use sugar instead of corn syrup; now, however, after recent droughts in the Corn Belt increased the price of corn syrup, the difference is down to 20 cents. Kloster’s wife, Iona Mae, who is also his accountant, thinks Kloster is foolish to spend that much extra. “You can be sure we discuss it every time an invoice comes in,” Kloster says.

Nearly every Wednesday, Kloster bottles about four hundred cases of the fruity soft drink using Imperial cane sugar. He relies on a 1946 bottle washer and a thirties bottling machine and other Rube Goldberg-esque machinery. Some equipment is held together with—yes —baling wire; when a part breaks, a part-time welder on the four-man bottling crew has to improvise a new one.

Created in Waco by Charles C. Alderton at Morrison’s Old Corner Drug Store in 1885, Dr Pepper was available only at soda fountains until 1891, when the drink was bottled in Waco and by Sam Houston Prim in Dublin. Kloster began working for Prim when he was fourteen and became the plant manager in 1946, when Prim died and left the plant to his daughter, Grace Lyon. Lyon, who is now in a Dublin nursing home and without kin, has indicated that she will leave the plant to Kloster, who is grooming his grandson, Mark Kloster, as his successor.

The 5-foot-11½-inch Kloster, who maintains his weight at 170 pounds despite drinking eight to twelve bottles of Dr Pepper daily, swears that the drink is smoother and sweeter when it’s made with sugar and that it retains more of its original cherry-dominated flavor when it gets warm. Though he’s too polite to criticize the status quo, he longs for the day when sugar prices drop enough so that the entire company can switch back. “I think all Dr Pepper is good,” Kloster says, “but I think the company would grow much faster if it used sugar.”