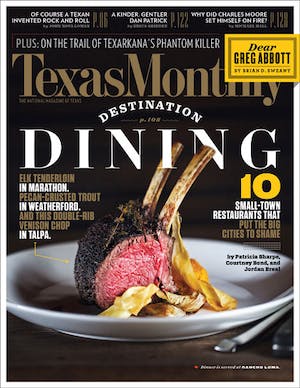 In a former National Guard armory building, now owned by the Austin Film Society, several grown men in form-hugging futuristic outfits attempt to blast through a fake steel door with pretend lasers. “You hit everything but the goddamned door!” one of them scolds after a comrade’s shot falls wide of the mark, creating a thick white haze but no opening. They stare at the door, thwarted and befuddled.

What happens next is unexpected, but to give it away would ruin the punch line. You’ll have to wait for the release, slated for next spring, of the science-fiction comedy Lazer Team, the first feature film from Rooster Teeth Productions, an Austin-based entertainment company best known for Red vs. Blue, arguably the Internet’s longest-running series, which began in 2003 as an absurdist parody of the video game Halo and has since evolved into a deeply plotted, visually stunning epic.

Rooster Teeth is also known for newer shows, like The Slow Mo Guys, whose viral videos reveal, frame by frame, what it looks like when, for instance, a bullet passes through a watermelon. Over the course of the past decade, Rooster Teeth’s YouTube channels have attracted 16 million subscribers and racked up more than 4 billion views. Not to mention the tens of thousands who flock to RTX, the company’s annual convention celebrating Internet culture and gaming, held in Austin, where unsuspecting voice-over actors are mobbed like pop stars.

The company was born out of the friendship of Burnie Burns and Matt Hullum, who met at the University of Texas at Austin in the mid-nineties, bonded over filmmaking, and went on to build an online empire. Now in their early forties, they’re the genial grandpas of the Internet era. The dream, though, was always to make feature-length, popcorn-worthy flicks. So this past summer, Rooster Teeth set out to raise $650,000 on the crowd-funding site Indiegogo to finance their first film.

The campaign reached that amount in less than a day and eventually pulled in $2.48 million, breaking the Indiegogo record for films. That money has allowed Burns and Hullum to bring on a crew of stunt coordinators and special-effects wizards, mostly from Central Texas, and to hire Alan Ritchson, who played Aquaman in the Smallville TV series and Raphael in this year’s reboot of Teenage Mutant Ninja Turtles, to play Adam, the would-be champion of the earth. Not bad for two guys who make silly web videos.

While the tone of Lazer Team is in keeping with Rooster Teeth’s ethos—cheeky, brainy, and foul-mouthed—Burns, who co-wrote the script and co-stars as a member of the titular team, is hoping not only to please hard-core fans, like the 37,497 who chipped in to support the production, but also to attract a broader audience that doesn’t know what it’s been missing. “It won’t be a thing where you have to say to people, ‘Ask your kids what Rooster Teeth is,’ ” he says, still dressed in his sweaty spandex costume after a full day of shooting.

According to Hullum, movie industry folks were shocked by how rapidly the project came together, from funding to filming in just a few months. “They say, ‘When are you shooting? Sometime in late 2015?’ ” he says. “People don’t understand the speed at which we work. But for us it’s normal.” As for what’s in store after Lazer Team, Hullum laughs. “Lazer Team 2, obviously.”