On Monday night, José Altuve got hit by a pitch during spring training. It was an accident, just an off-speed pitch that got away from the Detroit Tigers’ reliever. But if there was any question about how Altuve—who, until recently, had long been one of the sport’s most popular players—would be received by opposing teams in the wake of the Astros’ cheating scandal this past season, the reception from the crowd made it clear: they don’t love him.

Jose Altuve comes to the plate and… #Astros pic.twitter.com/YcCUHzsC0e

Fans aren’t the only people expected to express their disapproval for the Astros this season. They’ll likely be booed a lot, especially when they play teams like the Yankees and the Dodgers, whose 2017 championship hopes were crushed by a team that was found to have cheated their way to the World Series. But opposing pitchers, long the enforcers of a certain unofficial baseball justice, are probably gonna give it to them, too.

People who look at the potential suffering of other human beings as an opportunity to make a lil’ bit of scratch now seem to be profiting off of that, too, by placing bets on how many Astros will be hit by pitches, as well as who will be the first player on the team to get beaned. Here are the odds right now on which player is going to take the first regular season hit: 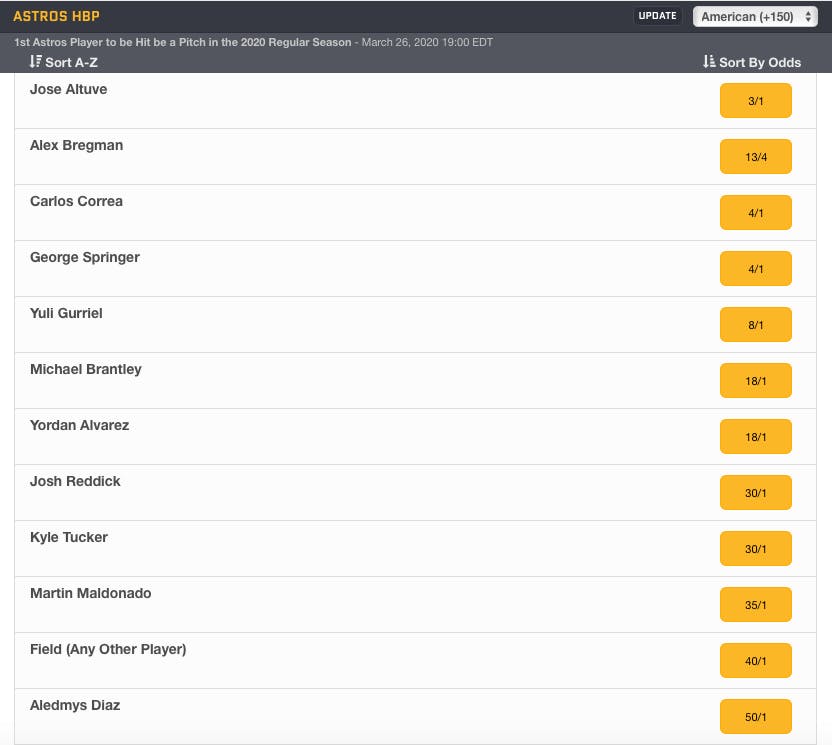 Strikingly, it seems like Altuve, once the kind of player who was considered an avatar for all that was good and pure in baseball, who’s got the best odds of being hit first—not Alex Bregman or Carlos Correa, who were found to have heard the trash can bangs the team used to communicate stolen signals on more than 16 percent of the pitches they faced, nor lead-off man George Springer (14.9 percent). Altuve, according to the Houston Chronicle, heard them on fewer than than 3 percent.

Why Altuve? He’s the face of the franchise, which means that he’s also the de facto face of the cheating scandal. Trash can bangs aside, his behavior around the scandal has been deeply weird, with claims about wearing wires and bad tattoos and his supposed shyness. So if you’re a pitcher looking to tell off the Astros as a whole, Altuve has become the guy in question.

Sending that sort of message is both more common in baseball now than it’s ever been, and the subject of a bit more controversy. Throwing a baseball at a person at 90 miles per hour with the intention of hurting them is a baseball tradition, and it’s also basically assault—and other oddsmakers expect to see it happen to the Astros a lot in the 2020 season. 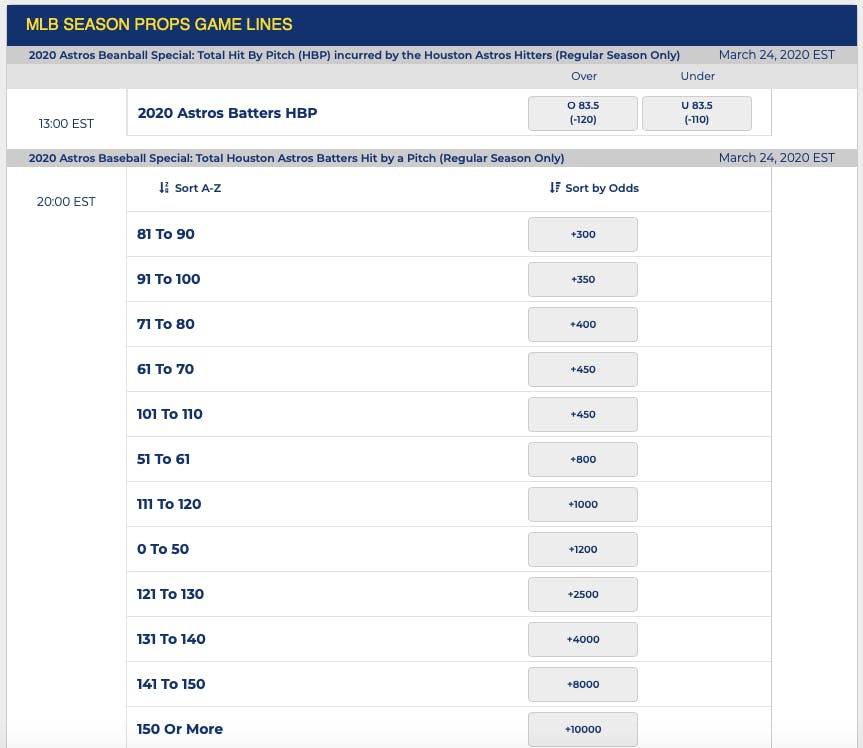 The over/under on the number of Astros players who’ll get hit by a pitch in 2020 is 83.5. That means you can bet on whether it will happen to Astros players more than 83 times during the season, or less than 83 times. Despite the fact that players are being hit by pitches more frequently than any time in the past 120 years—in 2019 it happened, on average, in four out of every ten Major League Baseball games, more than any year since 1900—an Astros player getting plinked in 83 games would well exceed that already absurdly high average, with it happening a little more often than every other game (every .51 games, to be exact).

The reasons players are getting hit more now than in the past (in the ten seasons prior to 2019, the average was once every 3.69 games) are complex—the statistics fanatics over at FiveThirtyEight did a deep dive into this last season and suggested that longer at-bats and an emphasis on speed played parts in the increase—but in the case of the Astros, it’s likely to stem from old-fashioned revenge.

Hitting players with pitches to send a message is the sort of longstanding baseball tradition that—like, say, stealing signs—every team does, and no team should. But given the general attitude toward the Astros from fans and other players alike heading into the spring, you can bet that it’s going to be a long season for the players on that team—and one that leaves a few bruises.