Johnny Football is now TMZ-famous… and somehow the gossip and celebrity site is also the voice of reason regarding the Texas A&M quarterback’s post-Cotton Bowl activities.

The faux-outrage began on Saturday, when Manziel Instagrammed a photo of himself at what turned out to be the Winstar World Casino, just north of the Texas border.

But the legal gambling age in Oklahoma is 18, as Manziel himself eventually crowed on Twitter.

So why delete the photo, which just makes it seems as though the “haters” have a point?

“Manziel needs to realize that he is the face of college football right now and he can’t post tweets like a 17-year-old recruit or an overpaid professional athlete,” wrote Graham Watson of Yahoo! Sports’ Dr. Saturday. “He should have fun. He’s a college kid. But in the end, there’s a time and a place to share your business and sometimes flashing dalla-dolla bills after a great run at the casino isn’t that time or that place.”

Ah. Maybe that’s the problem. Professional athletes are “overpaid,” but college athletes aren’t even supposed to have money, let alone be flashing it.

And Johnny Football is still Johnny-Has-a-Court-Date-This-Month, which ought to be a reason for more image-consciousness. But cockiness and flash is part of what enables him to play the way he does. And you kind of have to love the humor in it: go out on the football field and beat the crap out Oklahoma, then get in a car and help yourself to Oklahoma’s money. 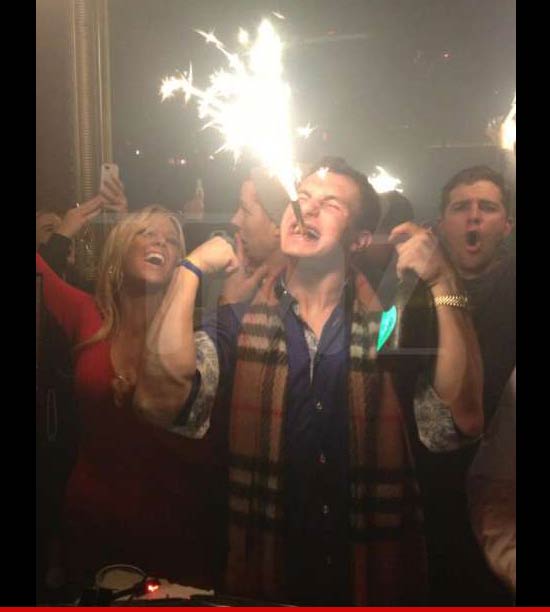 Anyway, Manziel’s trip across the Red River turned out to be the more minor online dust-up of his weekend, as both Deadspin and TMZ scored photos of the Heisman hero partying at the Dallas nightclub Avenu Lounge.

“The photos that TMZ published of [Manziel] at Avenu Lounge later that same evening grasping a bottle of Dom Perignon champagne are more problematic,” he wrote.

Deadspin‘s post inaccurately reported Manziel was at a similarly-named bar in Houston, a mistake it repeated three times in two sentences, and still hadn’t corrected nearly two days after publication. This despite its own commenters calling attention to the error (one of them even identified the woman in the red dress as Avenu’s VIP bottle manager).

Peppard took note of Deadspin‘s bad facts, prompting him to also question its report that Manziel was at Avenu with his father, which would mean he could drink legally in Texas. He wrote/speculated:

Before going to Avenu, Manziel joined friends and teammates for dinner at Al Biernat’s steakhouse on Oak Lawn . . . and his father was not among the group. So, unless his father raced to Avenu to go clubbing with Johnny, the reports of parental supervision appear suspect.

Leave it to TMZ, then, to set everybody straight. It did a follow-up post–ridiculously headlined “I Can Booze With My Mama in Texas”–reporting that not only were Manziel’s parents there, but according to the management at Avenu, the 20 year-old never actually took a drink.

Not that Avenu would try to protect a celebrity customer or anything. . . .