Austinite Carter Watkins has spent the majority of his career as a graphic designer, with work ranging from retro illustrations to Americana tour posters for artists like Eric Johnson. But recently he’s shifted to creating vibrant beadwork sculptures on unlikely canvases, such as animal skulls and guitars. While his digital and hands-on works seem worlds apart, Watkins says the processes of creating flyers and beaded skulls aren’t that dissimilar. “The graphic design background certainly helps me kind of design these bead art pieces,” Watkins says. “Sometimes I think of the beads as pixels, and other times they’re like puzzle pieces.”

What started as a part-time hobby and side hustle between design projects has now become a full-time occupation. These days, his beadwork art ranges from kaleidoscopic geometric patterns to extraordinary depictions of desert settings and Texas wildflowers. Recently, he beaded a guitar showcasing the shadows and depth of a desert night for his old friend Shakey Graves, who used it at his recent performance at Red Rocks Amphitheatre in Colorado. Since then, Watkins has received commissions for more custom pieces (including a request for a beaded alligator skull) and secured a spot in this year’s East Austin Studio Tour. Here’s what Watkins does on Texas time:

On using beads as a medium

My family used to go to trips down to Mexico when I was younger, and I remember walking down the street with my parents and seeing beadwork there. There was a huge, multicolored, really bright jaguar sculpture in the middle of this room. And it was just beads. It was the coolest thing I’d ever seen. So I just kind of put that in the back of my mind.

And then my wife and I moved into our house years later. I have this skull that I bought off the side of the road in high school. It was a longhorn skull with a Texas flag painted on it. And I thought it was really cool back when I was a senior at Austin High, but when we got our house we were kind of like, “Man this longhorn doesn’t really fit that grownup vibe we’re trying to have now.” But instead of getting rid of it I [thought], “Wait I’m an artist, I’m a creative guy. I could probably figure out some way to make this skull cool.” And so I remembered seeing the beadwork in Mexico and did a Google search on how they did that. The next day I go to a bead store, which conveniently is a couple blocks from my house, I get all the supplies, and start doing it. I mean, once I was about five days into it I was like, “Man, this is not only fun, but it’s going to be beautiful.” 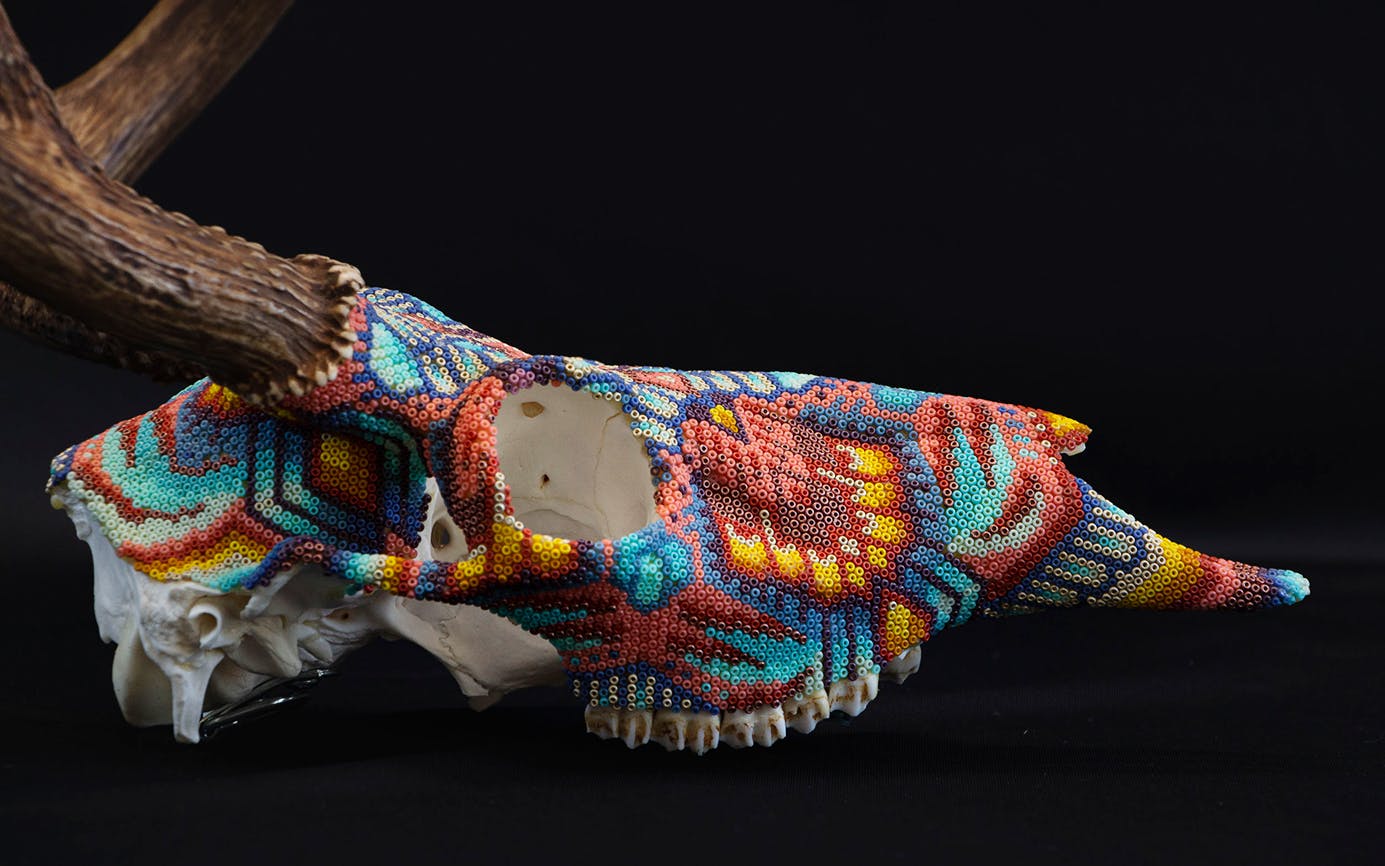 On developing a unique beading method

A lot of times, I just kind of start picking out colors that I like, and I just let them guide me. I grab colors that I think play nice together or would make an interesting composition. And then it’s just literally playing with rhythm. I normally find the middle of where I’m beading, make a shape, and then build up the shape.

But lately, I’ve been doing more photographic and conceptual stuff: wildflowers, the van Gogh. I felt like I was trapped in this geometry thing, and it was so easy to just make hexagons or diamonds and change colors. And I wanted to try drawing it out, trying to mock it up first.

On a typical workday

I work out of my home studio, so I wake up, play with my daughter, get her ready for day care. Then I make some coffee, and at about 8:30, I get in my studio and turn on KUT and start beading. Today I’m drawing, but I normally have a skull and tubes of beads all over my desk. I usually just listen to music and make art all day.

On favorite Texan musicians he listens to while working

I obviously listened to a lot of Shakey Graves when I was doing that guitar. I also just got the new Shawn Colvin thirtieth-anniversary Steady On album, and the new Bruce Robison Bruce-and-Kelly album [Beautiful Lie] is great. I want to do some kind of country-music-themed Nudie Cohn guitar in the future, like tattoo flash artwork, so I’ve been listening to a lot of Willie Nelson. [SiriusXM satellite radio station] Willie’s Roadhouse plays a lot of traditional country, and so that’s something I’ve been listening to a lot lately.

On Texan artists he looks up to

There are tons of Texas artists and so many good ones. Fort Lonesome, obviously, they do great design. I love everything Helms Workshop does on beer cans, and just the whole branding identity that they come up with. I like art and design on different levels. There’s commercial art that I just love looking at, and I love getting color ideas from what they’re working on. I follow a lot of graphic designers because that’s what I used to do.

On creating a piece for Shakey Graves

I’ve been friends with him for a long time, since high school. As an artist, he’s a really cool—Shakey musically is phenomenal—but artistically he’s equally as incredible. And so when I was working on something cool, I’d send a picture to him because I wanted Shakey to play one of my beaded guitars one day. And finally, he was like, “Hey, man, I’ve been meaning to talk to you … I want to collaborate on a project and get you to do some beaded stuff. You want to do my Red Rocks poster?” And I definitely wanted to. So I had this guitar laying around I thought would do, but they were like, “We’re gonna get you a new guitar from the Gibson showroom.” They were incredible clients to work with. I gave them a bunch of sketches, and they told me which one they liked. Of course, it was the hardest design, the one I was least confident that I’d be able to execute.

It was a quick-moving project, and I think the end result was just gorgeous. Shakey came up with this idea to donate it to the Children’s Cancer Association. It sold just the other day for $30,000.

On making the shift to being a full-time artist

Last year was the first time I had been laid off. And I was like, well, I’ve kind of been working on art for about four years on the side … I’m going to be an artist, or at least give it one hell of a try for a year. [The transition] was scary. My wife was pregnant with our first kid, and it was scary. I was confident that I could work hard enough and produce stuff, and jobs would come. I just gotta work it. It was a little nerve-racking, but I’m happy. I love doing it.

Advice for other artists

Study the basics, like proportion and line weight. Understand the design of things, and in essence what makes a good design—of anything—and learn to identify that and then to apply principles of good design to whatever you’re working on. And don’t be afraid to tear down and try again. Don’t be afraid to do the same thing tens of thousands of times, or at least be prepared to do that.