The dusty Panhandle town of McLean, population 775, has seen its share of hard times. In the August 2017 issue of Texas Monthly, I wrote about one of McLean’s most popular young cowboys, twenty-year-old Cody Crockett, and his girlfriend Sydney Wallace, who were burned to death in a prairie fire on the Franklin Ranch as they tried to save a herd of cattle. (Sloan Everett, the 35-year-old husband of Liesl Austin Everett, a daughter of one of the ranch’s owners, also died in the fire.)

Cody was the son and grandson of McLean cowboys, and his death shook the town. More than a thousand people showed up for his funeral at McLean’s One Way Church, the crowd so large that it spilled onto the street. “It’s going to take us all a long time to get over this loss,” Cody’s boss, Joe Magee, a longtime Panhandle cowman, told me. “Losing a good young cowboy leaves a hole in your heart.”

Cody’s little brother, Ben, had also been cowboying since he was a little boy. He told everyone that he wanted to follow in Cody’s footsteps and someday work on one of the big Panhandle ranches. But Ben also had another talent: he could play football, and as soon as he got to McLean High in the fall of 2016, he joined the six-man football team. The McLean Tigers were not exactly a football powerhouse. They would occasionally win a district championship—but only occasionally. At one point during the eighties, the Tigers didn’t win a football game for four consecutive seasons.

Nevertheless, Ben and his teammates, all of them childhood friends, were devoted to bringing glory back to McLean. After their coach, Clint Linman, who took over the job in 2017, had the players read With the Old Breed, about the Marines who stormed Okinawa, they were so inspired that “Last of the Old Breed” became their motto.

At 6-foot-1 and 215 pounds, Ben was, without question, the team’s leader. Coach Linman described him as “a special player with a different type of work ethic, and a special drive. He can just wear people out.” McLean didn’t lose a game during the regular season, and it rolled over its playoff opponents, compiling a 15–0 record and earning a berth in the Class 1A Division I state championship. During those fifteen games, Ben rushed for an astounding 2,760 yards and scored 59 touchdowns. On defense, he tallied 131 tackles, 11 sacks, 6 forced fumbles, and 5 interceptions.

But he saved his best for last. At the state championship game, which was held last week at AT&T Stadium in Arlington, the Tigers faced the Bulldogs of Milford (a town in Central Texas). It looked as if every citizen of McLean had made the trip to Arlington, from old cowboys and their wives to young families. Almost all of them were wearing black T-shirts that read “McLean Tigers State Bound!” I saw Cody’s former boss Magee and asked him who was keeping watch over his cows. “Oh, they’ll be okay for a day or two,” he said.

On the second play of the game, Ben busted loose for a 47-yard touchdown run. I was sitting near his parents, Brock and Kristie. “Run, Ben, run!” Kristie yelled. Brock, wearing a cowboy hat, just nodded his head. “He’s a good’un,” he told me.

Ben scored two more times in the first quarter on runs of 25 yards and 17 yards to put the Tigers ahead by a score of 24–8. Although Milford had a talented quarterback, TaRon Smith, who threw three touchdown passes to tie the game, the Bulldogs’ defense couldn’t slow Ben down. In all, he ran for 377 yards and nine touchdowns, a UIL state title game record. Oh—he also passed for three more touchdowns.

The Tigers won by a stunning score of 100–70. Needless to say, Ben was named Most Valuable Offensive Player. Kale Steed, a sportswriter for the Amarillo Globe-News, wrote that the state championship capped “a magical season” and that Ben’s performance “won’t be forgotten in McLean or Texas Panhandle history for decades to come.”

When the Tigers returned in a bus to McLean the night after their victory, police cars and fire trucks escorted them down Main Street. The townspeople stood on the sides of the street ringing cowbells. One man shot off some fireworks for a couple of minutes. “You know, life is hard out here,” Kristie told me. “Tragedy comes along unexpected. So when a happy moment comes along, you need to enjoy it. You need to say, ‘God is good.’ And this is one of those moments—a moment of real pride for our town.”

Top: Ben with his parents, Brock, a longtime McLean cowboy, and Kristie.

I talked to Ben the day after the Main Street celebration. He was about to turn in his football equipment for the season and pick up his jersey and shorts for basketball. Then he was headed back to his house to do some work with his father—prowling some pastures, checking on cattle, and making sure there was enough water at the windmills. I asked him how often he thought about Cody during the miraculous 2018 season. (Cody also had played for the Tigers during his high school years, wearing the #20 jersey, the same number Ben wore.)  “Well, sir, to be honest with you, a lot,” said Ben. “I mean, I  didn’t look up and have conversations with him. But I thought about him being here, so I could have heard him say, ‘Good job, little brother.’ I know that’s why I played as hard as I did. I did it for Cody.”

Ben said he’s probably going to go to college after he graduates from high school in 2020, and he’ll probably get a scholarship. (There will no doubt be some smaller colleges that will try to recruit him for their football programs.) But he knows that whatever happens, there’s a good chance he’ll come back to McLean and work as a cowboy. “That’s what my family does,” he said. “That’s what we’ve always done.” 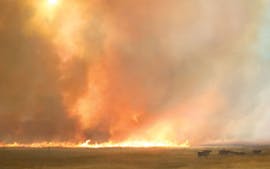