On Thursday, Dixie Chicks frontwoman Natalie Maines surprised Instagram followers by posting, in full, the band’s second single from its now-delayed second album, Gaslighter. “Julianna Calm Down,” a don’t-let-the-haters-bring-you-down classic in the vein of much of the band’s work, was accompanied by an image of the song’s title and the band’s name in bold letters superimposed over a collection of pale pink flowers. A few hours later, the post was removed, with a new note from Maines in its place.

“So I hope a lot of you got to listen to our new song ‘Julianna Calm Down’ before I was told I had to remove it immediately or the streaming sites would boycott our song,” Maines wrote. “Welcome to America! Where you don’t get to control your art, self expression, or creative whims. Corporations control that too. Apparently in 5 more earth shattering hours they will allow it. I’m currently seeking a new line of work.” She hashtagged the comment #notreadytomakenice. This post was itself later deleted. 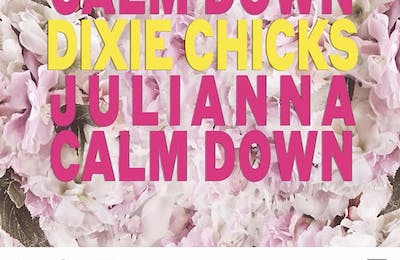 Maines certainly has plenty of reason to hold on to some frustration with the music industry, of course, even if the players she’s frustrated with today—Spotify, Apple, etc.—weren’t in the game when she and her band were initially vilified within the industry. It’s rare to see an artist of the Dixie Chicks’ stature put out an entire song a day ahead of its official release on social media—normally, we get brief snippets—but Maines has extra reasons to be frustrated with the way the music industry is releasing material right now. Gaslighter, the band’s first album since 2006, was originally slated for release today. The coronavirus outbreak, which has caused numerous delays in the music industry (and everywhere else in entertainment), pushed its release back indefinitely. Apple Music currently has December 31 listed as its release date, which is more likely a placeholder than a firm date. (New album releases typically come on Fridays, and New Year’s Eve is a Thursday this year.)

That’s a shame, because “Julianna Calm Down” is a delight, a shimmery ballad in which Maines sings to the daughters of her bandmates about how to withstand the toxic men they’ll meet in their lives. The song has a familiar Dixie Chicks banjo line plucking through the background but otherwise feels like some new sonic ground from the band. Producer Jack Antonoff, whose work with St. Vincent, Taylor Swift, and his own early-2010s band, Fun., earned him several Grammys, helps Maines explore a decidedly contemporary pop side of her work here, and offers another indication of where the band will (eventually) be headed on Gaslighter.

The song’s obviously a personal one for Maines—she sings, calling by name, to the twin girls of bandmate Martie Maguire (Katie and Eva), as well as Maguire’s youngest (Harper), and bandmate Emily Strayer’s daughter Julianna—which might help explain why whatever warning about boycotts she received from the streaming services pushed her to talk about wanting another line of work. (Warning: it’s a bad time to be on the job market.) Maines has written plenty of songs about wanting to do things on her own terms, and she’s used her platform and her music to encourage other women to do the same. If she needs to remind herself not to let her spirit get broken by the folks with money who are exerting their influence over how she releases her music, she might want to just put on “Julianna Calm Down” and listen to it herself. It’s a good one for that.