“Are you afraid of white people?”

Ten-year-old Emmie Gaines asks the question quietly but confidently. She and her four siblings, along with their parents, home design gurus and Magnolia cofounders Chip and Joanna Gaines, are in Waco, filming an episode of Emmanuel Acho’s YouTube series, Uncomfortable Conversations With a Black Man. As in all of Acho’s videos, the participants sit not across from each other in a typical interview format, but instead clustered in a row of cozy chairs, arranged against a stark white backdrop.

When Emmie asks her blunt question, the adults laugh nervously and shift in their seats. “That’s what I love about children,” Acho, 30, says with a smile, telling her it’s a “phenomenal” question before pausing a moment to think over his answer. “I’m not afraid of white people. I am cautious of white people,” he says. He goes on to use an analogy involving water and electricity—both are basic necessities, Acho explains, but he understands if the two have a negative interaction, it could end up being lethal. Since it was posted in June, the ten-minute video has been watched more than two million times, with the comment section—so often full of vitriol—replete with praise for Acho. “This man has a beautiful metaphor or story for everything,” one viewer wrote. “This is amazing. More of this,” added another.

“More of this” was an opinion shared by Oprah Winfrey. She invited Acho to adapt the series—whose guests have ranged from actor Matthew McConaughey to NFL commissioner Roger Goodell to four police officers from Petaluma, California—into an eponymous book through her imprint at Macmillan. (He’s also working with Macmillan on a children’s book, Uncomfortable Conversations With a Black Boy, slated to publish in March.) Released today, the 256-page book includes chapters that open with questions Acho has received from viewers, such as “How do you bring race up with minorities? I honestly have so much fear of saying something wrong.” In his clear, straightforward first-person style, Acho addresses such topics as implicit bias, voter suppression, and interracial relationships. The book includes historical context, as well as anecdotes from his youth in Dallas, his college years at the University of Texas at Austin, and his career as an NFL linebacker turned Fox Sports commentator. “Getting uncomfortable is the whole idea,” Acho writes in the introduction. “Everything great is birthed through discomfort.” 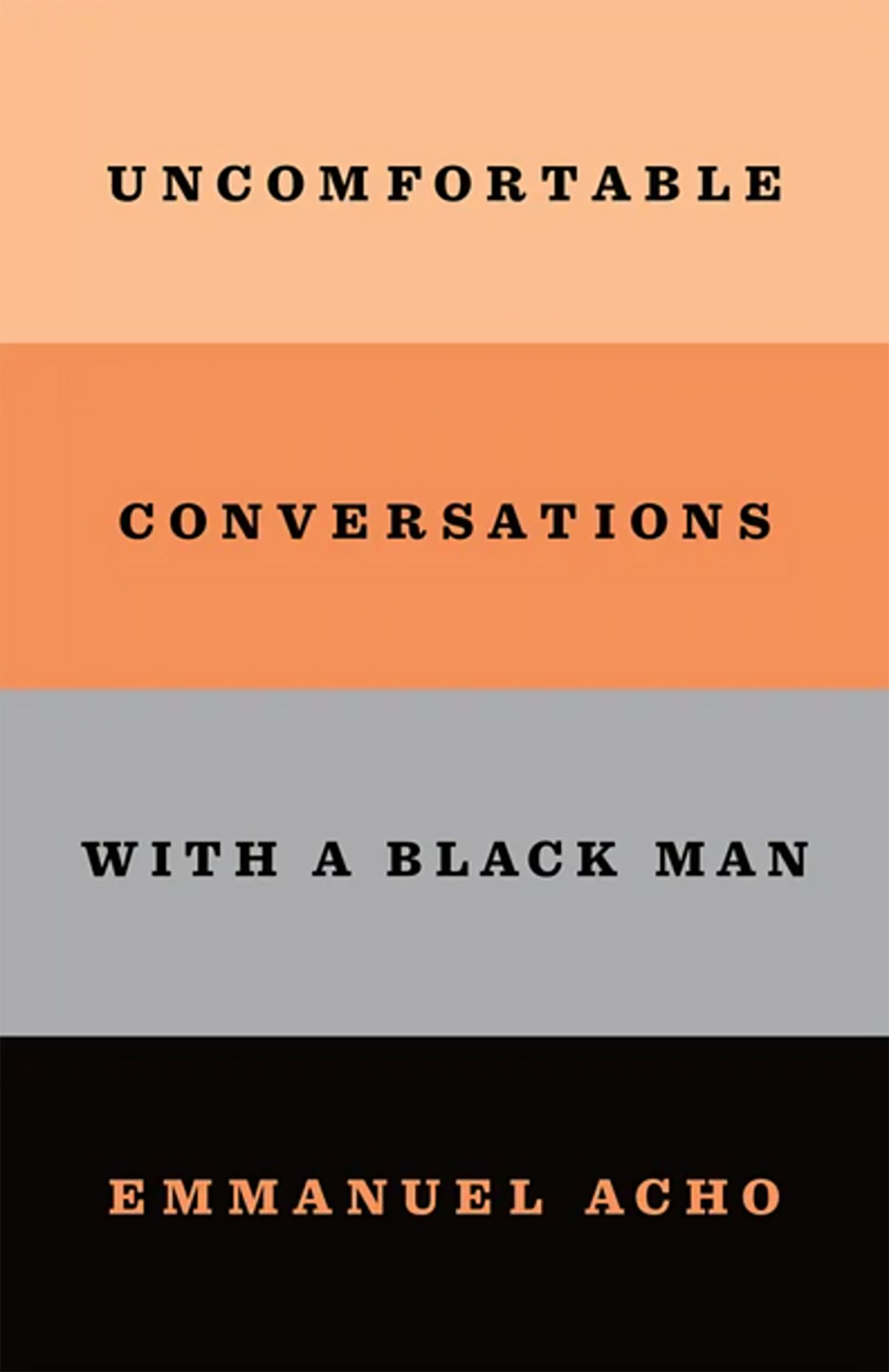 Acho spoke with Texas Monthly about how his Dallas upbringing influenced him as a facilitator for these tough conversations, the challenges and joys of writing his book, and what he wants readers to do next.

Texas Monthly: Why are uncomfortable conversations so important in the process of dismantling racism?

Emmanuel Acho: The only way that we can truly achieve empathy is through these conversations. I think that intention without direction ends up being void, and a lot of people have really good intentions, but they don’t have a lot of great direction. And I think conversations will help lead to the direction of it all.

TM: Was writing a book something you always had in mind, in addition to filming your videos?

EA: No, actually I didn’t have a book in mind at all. But I also wasn’t sure where the videos would go. The series began just out of an overflow of my heart, the anguish in my heart I chose to speak. And thankfully, I was able to partner up with Oprah, who shared my vision. I believe the spoken word has sizzle, but the written word has substance. And I wanted to make sure that these conversations would be substantive—not just get clicks, not just get retweets, but to be passed down from generation to generation.

TM: In the book, you write a lot about growing up in Dallas. How do you think that your Texas background has influenced your work?

EA: My upbringing is the only reason I’m capable of having these conversations. I went to St. Mark’s School of Texas. It was an affluent, all-boys’ school that was predominately white. I graduated with maybe five other Black people. But then I played football at the University of Texas and played football in the NFL, which was predominantly Black locker rooms. And so I was fully immersed in white culture and then fully immersed in Black culture as I got older.

What we’re dealing with is not just a color issue, it’s also a culture issue. The question is: how well do you understand other people’s culture? That is, I think, one of the biggest issues in our society. [My life experience] allowed me to translate and speak to both parties, even though there’s clearly a glaring communication barrier.

TM: You started your video series shortly after the death of George Floyd this spring, as the Movement for Black Lives was growing. What role do you see yourself playing in this movement, and why did you choose to step into it?

EA: It’s funny, I didn’t really necessarily choose to step into it intentionally. I just kind of spoke from the heart. I wasn’t trying to be a civil rights activist. I don’t even know what that means. I just know that I am a Black man, but before I’m a Black man, I’m a human being. And it’s my responsibility to try to make this world a better place, starting with my own community, starting with my own reach.

I now realize that my reach is a lot broader than I would have thought, but I still don’t view myself as some champion for civil rights. I just see myself as a young Black man who wants to see the world better for everyone. For those who look like me, for those who don’t look like me, and for those coming after me.

TM: What was the biggest challenge while writing this book, and what was your favorite part about writing it?

EA: The challenge of writing it was the time crunch and trying to write it in the midst of the chaos of my life. I’m hosting another show called Speak for Yourself on Fox Sports 1 where I’m currently the cohost. I have a day job. That’s my career. This [book] is my calling. And I believe that there’s a difference. Uncomfortable Conversations With a Black Man is my calling, but my sports show is my career. So I had to navigate that. That was difficult.

And the most fulfilling part, honestly, was when I got to the conclusion and I just talked about how I want the world to reflect what my life looks like. I had a going-away party when I left Austin to move to California. There were roughly seventeen or eighteen people there. Seven were white, like eight were Black, one was Hispanic, one was mixed. We were all sitting there in celebration together and we didn’t care about anything. Well, that’s what my life looks like. And I just want the world to look like a mixed pot of people from different backgrounds, different cultures, all just enjoying life together.

TM: Do you have advice for white people and allies who are wanting to have these conversations, but are also trying to be mindful of not emotionally burdening their Black friends or family?

EA: I believe that no one cares what you know until they know that you care. So my advice for allies is to just let people know, first and foremost, that you care. After the tragic murder of George Floyd, three of my white friends, called me—Brandon, Russell, and Trent—and all they said was, “Hey, we don’t know what to say, but we just wanted to call and make ourselves available. If you want to vent, vent. If you need to yell, yell. If you need a cry, cry. We just want you to know that we’re here for you.” That, to me, is really what it looks like.

TM: You close your book with the line, “Ending racism is not a finish line that we will cross. It’s a road we will travel.” So in that context, let’s say someone is on that road. They’ve read your book and watched your videos. What do you hope that they do next?

EA: I want people to act. My book is hopefully going to be the play that is called in a huddle. At a sporting event, at a football game, before the offense goes out and runs a play, they huddle. And in the huddle, they talk about the play that is about to be run. My book is that figurative huddle. We’ve huddled together around these words—and different chapters will mean different things to different people—but hopefully you now can digest the play and go execute.

Texas Has Always Been a Great Setting for the Apocalypse

DJ Screw, in the Mesmerizing Words of Those Who Knew Him

Inside the Oldest, Largest Independent Comic Book Store in Texas