On the eve of the publication of his new book about the Texas Revolution, Brian Kilmeade gave a promotional interview to his Fox News colleague Tucker Carlson. “All they wanted was a shot at success,” he said of the Anglo settlers who in the 1820s and 1830s flocked to what was then northern Mexico. “[T]hey said, ‘I’ll be a part of Mexico as long as you give us freedom and liberty.’” But, as Kilmeade explained to Carlson, when the Mexican government abrogated what the Americans believed were their rights—including unfettered immigration from the United States and easy access to cheap land—the newcomers took up arms and fought for independence. It was a choice that many, at the time and ever since, have likened to the actions of the Minutemen at Lexington and Concord in April 1775. This is an alluring story. It is also largely a myth.

In Sam Houston & the Alamo Avengers: The Texas Victory That Changed American History (Sentinel/Penguin Random House), Kilmeade, the co-host of the morning show Fox & Friends, reprises the formula that made his three previous books—and this one—runaway bestsellers: pick a Great (white) Man and a pivotal moment in the American past, and show how the two combined to alter the course of U.S. history. Sam Houston thus joins Kilmeade’s pantheon of George Washington, Thomas Jefferson, and Andrew Jackson, whose exploits symbolize “What Made America Great,” the name of Kilmeade’s history series on Fox Nation. (Recent episode: “The Walls That Saved America.”)

However familiar this story may be, Kilmeade tells it with élan, offering several vignettes from Houston’s early career to open the book, including the story of a ghastly wound to the groin that he suffered in the Battle of Horseshoe Bend during the War of 1812; his fraught relationship with his mentor, Andrew Jackson; and the time Houston spent among the Cherokee during a self-imposed exile after the dissolution of his brief first marriage. (For their part, the Indians—to whom he remained forever attached—called him “the Big Drunk.”) And once the action shifts to Texas, Kilmeade unspools more than just the story of the Alamo. He leads readers from the battle for San Antonio in 1835 to the massacre by the Mexican Army of more than four hundred captured rebels at Goliad in 1836 and right on through to Houston’s improbable victory at San Jacinto later that spring, which ended the war and effectively secured Texan independence.

Also to his credit, Kilmeade—unlike many popular historians—dips into some of the relevant scholarly literature on the key figures and events of the era. His portraits of Sam Houston and Stephen F. Austin are sharpened thanks to engagement with the modern biographies by James L. Haley and Gregg Cantrell, respectively. And Kilmeade has clearly grappled with the work of historian James Crisp, who has debunked some of the most cherished myths of the Texas Revolution, especially the circumstances surrounding the death of everyone’s favorite coonskin-cap-wearing Tennessean, Davy Crockett. As such, rather than perishing in action while clubbing a swarm of Mexican soldiers with Ol’ Betsy (a la Fess Parker in Disney’s Davy Crockett: King of the Wild Frontier), Kilmeade’s Crockett—as Crisp has argued—is taken alive with several other rebels and then unceremoniously executed.

But for all that, Kilmeade, a former sportscaster and stand-up comedian with no formal training in the discipline of history, utterly ignores a pair of key studies that would have added essential context to the story. Their absence is likely no accident, since they undercut the origin myth to which he clings so tightly: that the Texas Revolution is a successor of sorts to its American counterpart from 60 years earlier, a straightforward contest between the forces of freedom and tyranny. In his 2003 book Gone to Texas: A History of the Lone Star State, University of North Texas history professor Randolph “Mike” Campbell emphasizes the Southern roots of most early Anglo-Texan immigrants, who accepted Mexico’s invitation in large part because they planned to bring with them the cotton-slavery complex that was then booming in Alabama, Mississippi, and Louisiana. According to the terms of the agreement that Stephen F. Austin struck with the Mexican government in 1821, Anglos who moved to Texas would receive an additional fifty acres of land for each slave they imported. Yet despite this clear encouragement, Mexicans remained divided about whether to continue to allow slavery in their new republic. By the late 1820s, anti-slavery leaders in Mexico managed to pass laws limiting the spread of slavery in Texas (the only part of their country where the practice flourished), threatening the property of current colonists and discouraging additional immigration by slaveholders. Austin, meanwhile, fulminated in an 1833 letter that “Texas must be a slave country.” 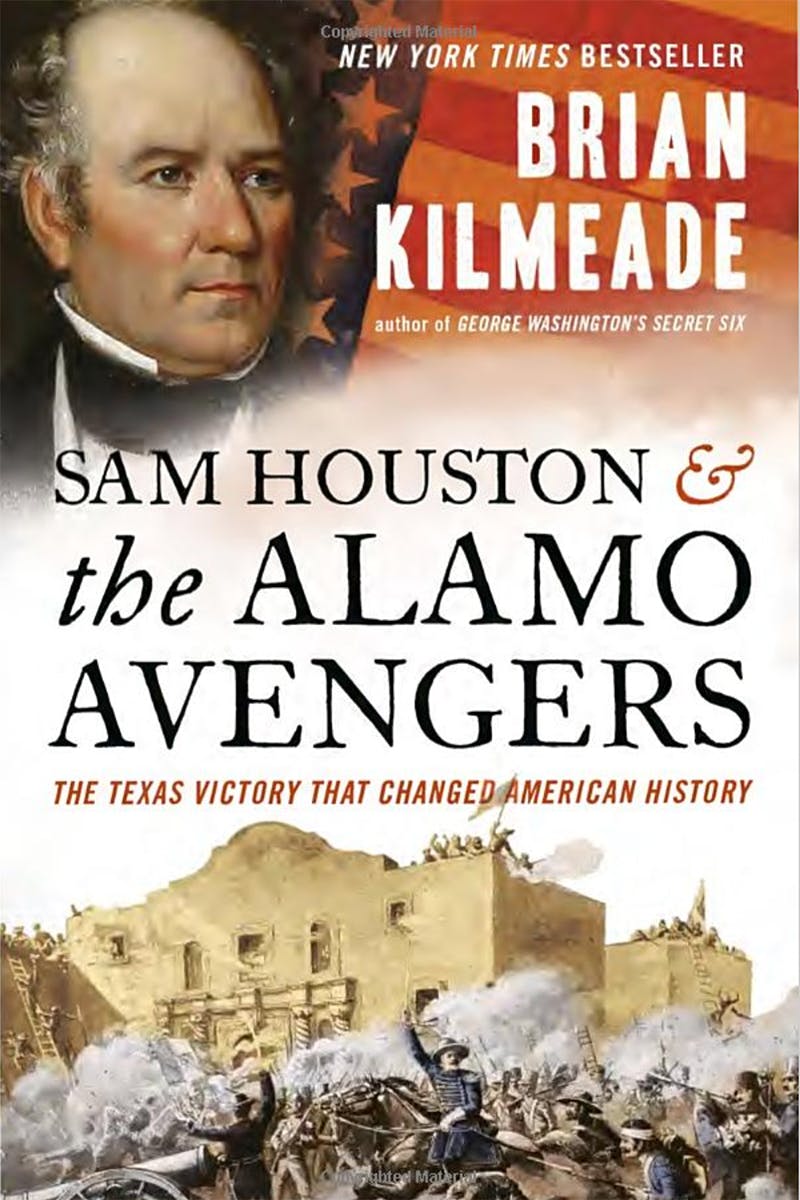 But regardless of its signal importance to the events that transpired, there’s only one reference to the peculiar institution in Kilmeade’s book, near the very end, as he discusses the tortuous politics of Texas annexation by the United States in the 1840s, which threatened to upend the precarious balance between slave and free states. Otherwise, this uncomfortable subject is buried beneath trite platitudes, as in this breathless passage about William Barret Travis’s famous letter, which the commander of rebel forces at the Alamo penned from within his makeshift fort: “He and his Texians might occupy an obscure frontier town, but he wrote as if their story, their cause, transcended time and place, his voice a cause for liberty everywhere.” Given that Travis, an Alabama transplant, was himself a slaveholder, the nearly 3,000 slaves then in Texas (a figure that swelled to 25,000 over the course of the next decade after Texas won its independence) surely understood his cause quite differently.

Campbell’s UNT colleague Andrew J. Torget underscores the Anglo aspiration of “bringing Mississippi to Mexico” in his 2015 study Seeds of Empire: Cotton, Slavery, and the Transformation of the Texas Borderlands, 1800-1850 (disclosure: this book appeared in an academic series that I coedit). His deep research in U.S. and Mexican sources establishes beyond doubt the singular pull of cotton farming—with its inextricable ties to slavery—in drawing white Americans to Texas. Numbers tell part of the story: at the time of the first census of Austin’s colony in 1825, less than four years after Anglo immigration to northern Mexico had begun, one-quarter of the people living there were slaves. Likewise, the rebels’ political strategy is revealing: they rooted their cause in federalism (that is, states’ rights), in opposition to the centralizing tendencies of some Mexican officials, who sought to consolidate power in the hands of the national government. And the states’ right the Texans most relentlessly asserted was the power to own slaves.

Along the way, Torget recovers another subject that Kilmeade studiously avoids: the indispensable role played by Tejano politicians in safeguarding Texas slavery.  Though bondage was under attack by the Mexican government during the 1820s, it endured in Texas thanks mainly to the efforts of men like José Antonio Navarro, who—among other tactics—plotted with Anglo slaveholders to protect the peculiar institution by reclassifying it as indentured servitude. When Mexico City attempted to close that legal loophole in the early 1830s, Tejanos continued to work alongside Anglos in circumventing any measure that might slow American immigration to Mexico. And when war finally came, many Tejanos fought alongside the Anglo rebels; a handful died at the Alamo, and two—including Navarro—signed the Texas Declaration of Independence on March 2, 1836.

Almost none of this finds its way into Sam Houston & the Alamo Avengers. After all, acknowledging the importance of slavery to the Texas Revolution as well as the crucial support of Mexicans (a population frequently mocked or demonized by Fox) further erodes the heroic tale of Anglo valor spun by the author. Kilmeade fails to mention Navarro at all, and Juan Seguín—Stephen F. Austin’s closest Tejano ally, who paid dearly for his loyalty to Austin’s cause—passes so quickly from the stage as to go virtually unnoticed. In fact, the only person of Mexican descent whom Kilmeade even remotely develops is General Antonio López de Santa Anna, held up for readers as the apotheosis of Mexican brutality, thus conjuring a trope long popular with writers championing the Anglo cause. Kilmeade narrates the appearance of the Mexican leader by describing him as “a dangerous man, with what appeared to be an insatiable lust for power and wealth,” adding that “he seemed to believe that cruelty was usually the best strategy.” Kilmeade sprinkles such pejoratives throughout the text. Some myths, naturally, require uncomplicated villains as foils for unimpeachable heroes.

To be sure, writers must make choices—often agonizing ones—about what to include and accentuate in their stories, and important material inevitably winds up on the cutting room floor. Moreover, strained attempts to incorporate actors from various identity groups can breed cynicism among readers, who fret that the narrative has been distorted in the interests of inclusivity. But Kilmeade’s cherry-picking is particularly brazen, considering that, though he accepts Crisp’s version of how Davy Crockett died, he skips over Crisp’s personal meditations on how the history of racism has skewed our memory of the Texas Revolution. (To say nothing of Kilmeade’s complete avoidance of Campbell and Torget.) In short, it is only a scrupulously selective reading of the past that sustains a view of the Texas Revolution as a morally unblemished struggle for freedom and independence. This, in turn, makes it all the more disappointing that Rice University historian Douglas Brinkley offers a ringing endorsement of Kilmeade’s book, gushing that “Every page sparkles with historical insights, fine writing, and fast-paced Western-style action. A must-read!” (Brinkley, it is worth noting, is not a scholar of Texas.)

In the end, Sam Houston & the Alamo Avengers is merely an extension—though somewhat more learned and subtle—of the nativist pablum for which Kilmeade’s network is loved and loathed in seemingly equal measure. Last August, when a white supremacist slaughtered 22 people of Mexican descent at an El Paso Walmart, Kilmeade defended the president’s—and, by implication, the gunman’s—use of the term “invasion” to describe the crisis along our nation’s southern border. “When you have over 110,000 people coming a month, over a million last year, and then well over a million this year, if you use the term ‘an invasion’ that’s not anti-Hispanic, it’s a fact,” Kilmeade said. President Trump was apparently watching this performance in real time, as suggested by his approving references to Kilmeade’s remarks in his Twitter feed. One wonders only why he didn’t join Douglas Brinkley in providing a blurb.

Andrew R. Graybill is professor of history and director of the William P. Clements Center for Southwest Studies at Southern Methodist University.