These days, Texans are more likely to encounter Frida Kahlo as a commodity than as an artist. The likeness of the acclaimed Mexican painter, with her instantly recognizable unibrow and flower crown, can be found on anything and everything: T-shirts, coffee mugs, posters, jewelry, stationery, and kitchenware. You can choose from nearly forty thousand Frida-themed tchotchkes on Etsy, or join her 1.2 million Instagram followers. A cartoon version of her nearly stole the show in the movie Coco, and an animated biopic is in the works. With depictions of her everywhere, it’s easy to lose sight of the reason why people are so fascinated with Frida Kahlo in the first place: her art. Kahlo’s self-portraiture and surrealist renderings of a complex life filled with grief and pain continue to capture the imaginations of many.

Starting March 7, visitors to the Dallas Museum of Art will be able to glimpse a rarely seen side of the artist in a new exhibit. “Frida Kahlo: Five Works” includes four paintings and a drawing made across a nineteen-year range. The earliest work, from 1932, is a pencil drawing of New York City seen through a hotel window. The paintings include a portrait of Kahlo and her husband, renowned muralist Diego Rivera, in a shell-covered frame; Sun and Life, an allegorical depiction of the life cycle; and two still lifes featuring fruits and other artifacts, painted just three years before her death in 1954 at age 47.

None of the five artworks is especially well-known, which makes them all the more interesting. Mark A. Castro, who curated the show, says he hopes it will help viewers understand Kahlo’s famously free-spirited and difficult life in a new way.

“I think what ties these five works together is really an approach to look at them as—what does this tell us about how Kahlo paints and makes work? What does it tell us about the kinds of things she was interested in? It also tells us something about where she was in her life or what was happening at that moment,” says Castro, the DMA’s Jorge Baldor Curator of Latin American Art.

One of the five works, Sun and Life (1947), is especially ripe for interpretation. Created near the end of Kahlo’s life, the painting features a reddish-orange sun with a stonelike human face. The sun has a third eye, which is shedding a tear. Surrounding the sun are several seedpods, each revealing a darker interior with bursts of growth. The pod directly behind the sun holds a crying fetus. There’s clearly a lot going on here, but if you’re mystified as to what it all means, you’re not alone.

“For me, what I think is so interesting about the work is not what it tells us, per se, but sort of what it holds back,” Castro says.

Let’s start with the sun, whose face Castro describes as “enigmatic.” It has a vacant expression, almost as if it’s made out of ceramic or stone. That’s one reason scholars have connected it to other visual cultures Kahlo studied. She had an interest in ancient Egyptian mythology, Aztec codices, and Italian Renaissance painting. If you squint, you might see the influences of all three. 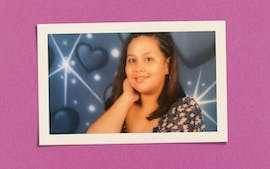 For his part, Castro interprets the sun as a symbol of Kahlo’s connection to Earth, especially to Mexico’s landscape. She came of age during the period following the Mexican Revolution, when the country was forging a new national identity celebrating mestizos (people of mixed-race descent) and uplifting indigenous history. The Mexican government reinforced these ideas through publicly funded murals, including many by Diego Rivera. “And in that environment, she sees [the sun] as kind of representative of a larger, deeper spiritual connection to the place and to identity that is lacking in the United States,” Castro explains. “I think she’s invoking a certain kind of spiritual connection and identity connection to Mexico.”

What about that third eye? It’s a common trope in Kahlo’s work, points out Claudia Zapata, a doctoral student of art history at Southern Methodist University and a curatorial assistant of Latinx art at the Smithsonian American Art Museum. The third eye references enlightenment, higher consciousness, or “another form of sight, like wisdom,” Zapata says. Compared to the rest of the stonelike face, the eye is more human—it’s in full color, and it’s crying.

“All of her work is somber in a way, but this one in particular is very melancholic, because it has this air of sadness—obviously there’s a tear,” says Zapata, who calls the painting “very narrative,” for its portrayal of plants germinating, a fetus growing, and the sun looking down on it all. “It’s basically an allegorical work about life.”

With the help of the museum’s paintings conservator, Laura Hartman, Castro was able to use advanced imaging techniques, including x-radiography and infrared photography, to peer below the surface of the artwork and see how it was made. They found that Kahlo made substantial changes to Sun and Life as she was painting.

“A lot of these pods were actually much more closed, and their interiors much less defined” when Kahlo first applied paint to the canvas, Castro notes. “The one behind the sun that has this fetuslike shape was originally shown almost entirely closed. I wonder if there is a connection there to the kind of desire to . . . make something more visible, rather than keeping it more hidden.”

Kahlo boldly depicted her personal journey with miscarriages in her art. After a bus accident that fractured her spine and pelvis when she was a teenager, she spent many years struggling with chronic pain, illness, and infertility. A traumatic miscarriage in Detroit led her to draw Frida and the Miscarriage (1932) and paint Henry Ford Hospital (1932). Both works include a fetus that looks similar to an illustration you might see in a medical textbook. Kahlo had a strong interest in medicine, and she’d been preparing for med school before the accident derailed her plans. You can see these experiences in her work, Zapata says: “Her kind of rethinking, representing the body, and her body in particular, is just such a fusion of her training and the fusion of her handling grief and making that a public process.”

But the fetus in Sun and Life also has a broader meaning, gesturing to personal growth and mortality. When she painted Sun and Life, Kahlo was nearing the end of her life and was confronting issues of reproduction in a more “metaphorical and symbolic” way, Castro says.

“I’m also uncomfortable with the ways in which we reduce so much of Kahlo’s work to this question of having children or not having children,” he adds about existing scholarship and interpretation of her works. “That is something we need to move beyond or interrogate more critically.”

Infertility and pregnancy loss are still taboo subjects today, and they were far more so in the 1940s and ’50s. Kahlo was a radical artist for portraying these experiences during her lifetime. She made “trauma acceptable versus shunned,” according to Zapata, and it’s because of her vulnerability in her art that fans still feel connected to her.

“Her works are incredibly personal, and they often so clearly reflect on events in her personal life,” Castro says. “I think people feel a great deal of empathy for someone who’s able to viscerally show emotions that many of us feel.”