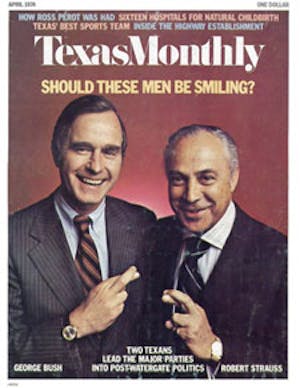 The old friend who’d arrived out of the blue an hour before was standing now on the small landing outside my front door. He was confused. His head bowed with uncertainty while his neck tensed with determination. After 20 years of trying, he’d just left his old home state. “I hate Texas,” he said. “I never want to hear about Texas again. Texas has ruined my life.” It was a chorus he’d repeated several times during his visit, but he’d stopped just out the door to say it again as if a moment’s relenting or a single false step would be the crack in his shell through which he’d fall all the way back to San Antonio. “We’ll go drink beer,” he said, finally trudging down the flight of stairs that led to my flat, “but none of this sentimental lollygagging about when we knew each other in Texas.”

I didn’t see him for quite a while after that, but from what I heard he was starting to tempt fate. He took to calling old buddies and older girlfriends who were still living back in the forbidden territory. He wore cowboy boots to a party. He was going to write a book about Texas bluesmen. Six months later, when we finally ended up drinking beer together, the midnight hour found us lollygagging sentimentally about Texas. My friend had been listening to Mendicino, then the latest album by the Sir Douglas Quintet, a group led by Doug Sahm.

“All those songs about leaving Texas,” he moaned. “They were the ones that started me calling everybody. How am I supposed to listen to a song called ‘Lord, I’m Just a Country Boy in this Great Big Freaky City’ and not get homesick?” I sure didn’t know the answer to that one.

“You can’t just leave Texas,” he went on, “the way you can just leave Idaho.” He started talking about another song called “Texas Me.” He stopped to guzzle what must have been his hundredth beer and before I knew it was letting fly with the chorus in a scratchy voice that swooped unpredictably from bass to tenor:

“Now I’m up here in Sausileeeeto
Wonderin’ where I oughtta beeeeee;
And I wonder what happened to that maaaaan inside,
The real old Texas meeeeeee.”

He slumped down in his chair, glancing quickly right and left to see if anyone were staring. I had filled his mug from our pitcher. He wrapped both hands around the mug, squeezing it so hard his knuckles turned white. “I don’t need goddamn Doug Sahm to tell me about leaving Texas,” he said, “but he sure as hell knows what it’s like.”

His whole body tensed and for a moment I thought he might crush the mug with his bare hands. Then his knuckles regained their color. He looked at me. His face was calm and melancholy, resigned and steady. “You know,” he said in a beer-soaked whisper, “I hate Texas . . . but it’s the only heritage I’ve got.” The next afternoon I bought a copy of Mendicino for myself.

Doug Sahm learned to play in San Antonio where the music has always been a blend of various styles—country, rhythm and blues, Latin, even cajun—a blend refined in country roadhouses or wood frame bars that serve only beer, or at the kind of high school prom where guys with slick hair have rented blue and black brocade tuxes, or in “nite” clubs with fast reputations, places with the kind of ambience that draws Doug to write sticky, maudlin good-bad songs like “She’s Huggin’ You But She’s Lookin’ At Me.”

But coming out of that world he had a national hit, “She’s About a Mover” in 1965. Almost 15 years earlier he had played Nashville’s Grand Ole Opry when he was nine. Through high school he formed his own bands and also jammed with numerous musicians living in San Antonio and a good many others who were just passing through. He had one local hit while still in high school, a chicano hit (!) shortly after graduating, and a modest string of local and regional hits during the early Sixties. So by the time “She’s About A Mover” started climbing up the national charts, Doug was just a young kid with 15 years experience as a professional musician.

It was a good thing, too, for he was going to need something to fall back on. “Mover” ‘s producer, a Houston record company owner named Huey Meaux who over the years has recorded some of the best Texas and Louisiana musical talent, tried to mold Doug’s band after the English groups whose songs were just then starting to dominate the rock and roll airways. He tagged the band The Sir Douglas Quintet, had them let their hair grow (Meaux thinks they were the first American band to adopt long hair), and sure enough they rode “Mover” ‘s success to a national television appearance on Hullabaloo, a U.S. tour with James Brown, and a European tour on a bill with The Rolling Stones and The Beach Boys. Heady stuff. In just six months Doug had gone from a San Antonio barroom musician to a rock and roll star. The swirl broke up the band; most of them wanted to go back to Texas and they did. Doug drifted out to California where around 1966, four discoveries had recently been made: peace, love, rock, and acid. He started writing the songs about Texas-to-California culture shock that had called so loudly to my friend.

Doug made three albums in California. After the third. The Sir Douglas Quintet Together After Five, for which Doug wrote songs like “Seguin,” “Dallas Alice,” “Nuevo Laredo,” it was no surprise to learn that he had moved back to Texas. Evidently it was the right thing to do. Doug had never seemed very comfortable as a flower child—any song he ever did about groovy days in the park digging vibrations is terrible. But almost everything else he chooses to play, and it could be a cajun stomp to a country waltz to big band blues, sounds just fine. The music that flowed out of San Francisco in those days was influenced by blues and rhythm and blues and country-western, the same elements that form the major strain of Doug’s music. But they aren’t his influences so much as his meat and potatoes; what he plays is blues, is country-western, and coming back to Texas was a return to a place where his kind of music is, by long tradition, the music.

The only question is how well he’s going to play it, and the answer is in his records and his performances. His records, although there may be squabbles about this song or that, have always been good; but Texas Tornado, his last release, is by far his best. And in Houston last February he appeared at a benefit concert with the cream of the up and coming country rockers—Jerry Jeff Walker, Billy Joe Shaver, Michael Murphey. Commander Cody, Asleep at the Wheel, Willie Nelson. Anyone who was there will tell you that night Doug was better than them all. And separate from them too; the product of a related but distinct time and culture. Michael Murphey, for instance, is himself a seasoned pro as both a songwriter and performer, and the difference between his age and Doug’s is less than ten years. But when they met on the stage to sing a duet Murphey told Doug, “I used to listen to your records when I was a kid.”

Backing Doug on Texas Tornado is essentially the same group of musicians that had recorded Doug Sahm and Band in early 1973. The record sleeve now calls them The Sir Douglas Band. They include Quintet veteran Augie Meyer on keyboards and some of Doug’s old San Antonio buddies like Rocky Morales on tenor, Jack Barber, who really is a barber, on bass, Flaco Jimenez, the chicano accordion player, Martin Fierro on sax, and the country harmonizer Atwood Alien. Their talents are blended with those of a host of journeyman studio musicians and the special skills of Dr. John on piano, the powerful George Rains on drums, and the tenor sax of Fathead Newman.

Texas Tornado comes nine years after “She’s About a Mover,” and it shows Doug’s come a long way. Of all his albums this is the best-arranged, best-produced, best-performed, and has the best selection of material. One side is completely reserved for the kind of funky, San Antonio music that the Quintet had always been known for, now played with new confidence and enthusiasm, as if they’d just discovered once again how much fun it really is.

The other side of the album, featuring big band arrangements with a full complement of brass, keyboards, and percussion, is dominated by Newman’s tenor solos and by Doug’s authoritative singing which seems to have taken on a whole new dimension. The mellow, melodic “Blue Horizon,” which Doug wrote, sounds like a smoky, romantic, nightclub ballad until verses crop up about how hard it is to get along with the finance company. Where did he learn to sing like that? And even D. Malone’s blues “Ain’t That Loving You,” which is the kind of thing Doug could always do, is delivered with a confidence and precision that’s taken years of playing to find out how to do.

There is a tendency in music, as I guess there is in everything else, to revere the old practitioners, the legendary blues singer who was never recorded, the genius sax man who spent his life playing dives and never got the recognition he deserved. A young musician starting out feels inferior to them, not yet privy to all the secrets of the tradition the old hands embody. But after seeking out those old musicians and after making his way through a fair number of those dives, he’s not a young musician anymore. He’s moving toward the point where his music is making what will be the tradition for the new talents coming along. Doug Sahm probably reached that point long ago. Texas Tornado should convince anyone who was still doubting. I hope my friend, recovered from his culture shock or not, is still listening.