Kacey Musgraves is living her absolute best life right now. She won the Grammy, she’s headlining festivals, she conquered the Met Ball, her forthcoming tour is selling out dates around the globe—it is her time, y’all. And she knows it.

How do we know that she knows just how thoroughly she is dominating right now? Because in the extremely psychedelic video released this morning for Golden Hour‘s latest single, the AutoTune-saturated “Oh What a World,” there is a painting of her as a dang centaur within the first minute.

Take a look. Right at the 0:52 mark, the screen goes dark before we see a shot of a shirtless depiction of Musgraves. The camera pans back on the image, revealing that she is not just enjoying some au natural time in front of a background of twinkling stars—she is the mythical half-woman, half-horse beast from Greek myth known as the centaur.

In mythology, the centaur is borne of the union of a powerful king and a cloud nymph made in the likeness of Hera. In our current cultural understanding, though, the centaur’s meaning is very simple: awesomeness.

The most famous celebrity centaur is longtime New York Yankee (and briefly tenured Texas Ranger) Alex Rodriguez, who is long rumored to have had a painting commissioned of himself as a centaur hanging above his bed. (Rodriguez, in 2012, attempted to deny the rumors, declaring, “I do not have a painting of my upper body as a minotaur.” The rumor originated from an anonymous ex quoted in a 2009 Us Weekly piece, which is not a particularly reliable source, but also: who would make something that specific up? And Rodriguez’s denial is flawed for two obvious reasons: 1) no one accused him of having a painting of himself as a minotaur, which is a human body with a bull’s head, and 2) he carefully uses the present tense, which does not address the suspicion that he may have once had a centaur painting in his bedroom that has since been removed. We’re not PolitiFact here, but everything about this is perfect, and despite a dearth of clear evidence, our hearts have led us to declare this anecdote “mostly true.”

A-Rod’s possibly apocryphal centaur paintings aside, this isn’t the only instance of the centaur-portrait-as-symbol-of-potency in recent pop culture. A 2011 episode of the beloved NBC comedy Parks  and Recreation featured an entire episode about the phenomenon, in which a painting by the hapless Jerry inadvertently depicts his supervisor, Amy Poehler’s Leslie Knope, as the creature. The image, which appears below in a SFW form, quickly incites the townspeople of the fictional town of Pawnee. Poehler’s character, struck by the awesome image of herself as the mighty centaur, steals it to prevent its destruction.

Musgraves, as a savvy and pop culture-aware artist who delights in irony (on her most recent tour, she was fond of tweaking the lyrics to her album’s tender title track by singing the words “Golden shower” in the final chorus, a charmingly juvenile reference to a less-than-sanitary sex act), is almost certainly aware of both the A-Rod rumors and the Parks and Rec episode. She’s engaging with our understanding of the centaur as a way to depict someone powerful as, perhaps, the most powerful version of themselves. While none of the following images were commissioned by the subjects themselves, fans of a variety of figures—politicians, actors, musicians, athletes, and more—seem to love depicting them as centaurs.

Here, for example, is a depiction of Mitt Romney as a centaur, created by the Washington Free Beacon in an apparent show of support for the former GOP nominee’s eventual bid to become Utah’s junior senator.

Sports site SB Nation, in a hallucinatory fit during the height of Tebowmania, created an entire series of images of former college football great/NFL washout/current Minor League ballplayer Tim Tebow as a centaur, our favorite of which appears below. 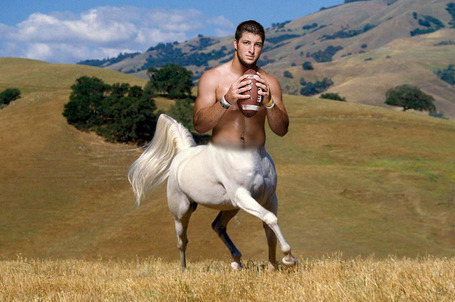 Russian president Vladimir Putin, aware that a shirtless figure astride a horse is a universal symbol of potency, is fond of posing in just such a manner. This image, which is the creation of artist Alan Healey, imagines a mingling of the two that, we suspect, Putin would approve of.

The Internet loves a pun, which is presumably why there are so many images of rapper 50 Cent as a centaur (50 Centaur, yep).

Really, as long as you’re okay getting some extremely weird targeted ads later on, you can find results by googling just about any celebrity’s name + centaur. Riff Raff, the white Houston rapper who was briefly famous in 2014? Sure, he was drawn as a centaur on Cartoon Network’s Regular Show. 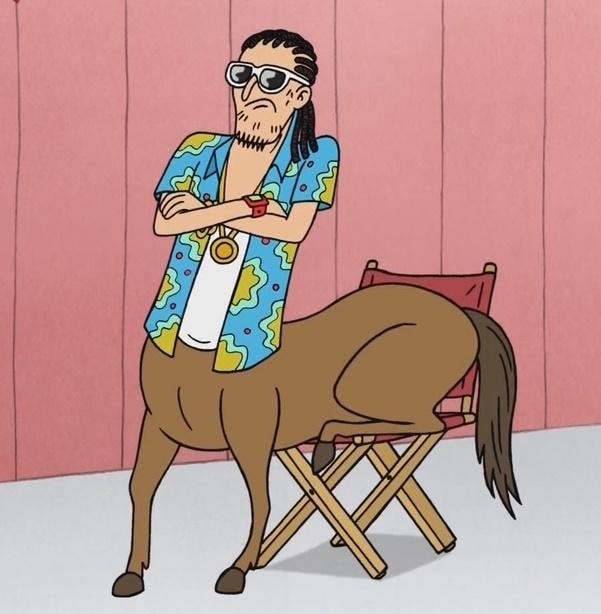 The list goes on (and on and on and on). The major differences between all of these images and the centaur version of Kacey Musgraves that appears in the video for “Oh What a World” are that, like A-Rod, Musgraves personally commissioned the portrait, and unlike A-Rod, she’s not a coward about showing it to the rest of the world.