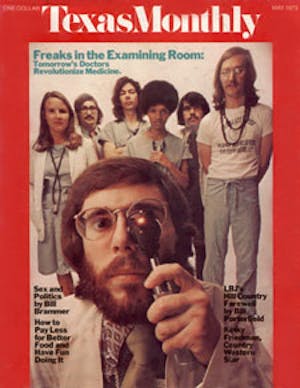 WHAT CAN I SAY TO prepare you for Kinky Friedman? Kinky is a funny, Jewish country-western poet. He’s the only recording star in Nashville who buys his clothes at the Hadassah Thrift Shop.

Kinky’s songs transgress so many cultural borders that he can offend Jesus Freaks and Jews and goatropers and women’s libbers in the same song. Then, in the next breath, he will finagle everyone’s forgiveness with a verse so poignant that you know there’s a heart of gold thumping under his blasphemous exterior. Kinky is just a nice Jewish overachiever who had the curious fortune to spend some of his formative years in Texas’ cowboy country, some in various academic communities and some in the monsoon area of Borneo. He was bound to be a little schitzy.

Kinky, born Richard, and his younger brother, Roger, who performs some business functions for his brother, are the sons of a speech therapist and an educational psychology professor. Tom Friedman teaches at the Austin campus of the University of Texas, and, during the summers, the whole family runs a camp for children ages 7 to 13, in the Texas hill country. It’s not a typical regimented, competition-prone Texas camp. Roger calls it “a Franny and Zooey farm.”

Country-western music, especially Slim Whitman, first caught Kinky’s ear at camp. C&W was all he could pick up on the radio. He wrote his first song, “Make My Coffee Blue,” at the age of 13. Tom and Mim Friedman had the foresight to encourage their elder son’s penchant for weird rhyming and soon Kinky was performing for the camp children. “I’d sing them to sleep in the bunkhouse. It was just like bedding down cattle for the night,” Kinky remembers.

He broke…well…stumbled into records in 1966 with a locally pressed single—King Arthur and the Carrots singing “Schwinn 24” and “Beach Party Boo Boo.” The tunes were haircuts off the then-popular surfing songs by Jan and Dean. “It was a good little record, but it never quite took off,” Kinky said.

After college, Kinky trained for a Peace Corps project in Tanzania, but he was deselected, partially, he maintains, because of the notoriety he had gained from King Arthur and the Carrots. He tried again and was sent to Borneo to distribute seeds, but monsoons made it impossible to go upriver and play Johnny Appleseed, so Kinky stayed in the city and played Frisbee. He insists he introduced the Frisbee to Borneo, “but the natives only used it to make their lips big.”

Back in the U .S. of A., Friedman set up headquarters at the family ranch, Rio Duckworth, which is down the road from the summer camp, equidistant between Kerrville and Bandera. The decor at Duckworth reveals the Friedmans’ eclectic (real bizarre) tastes. Among the most treasured items are the stuffed head of a Longhorn reputed to have originally hung in the foyer of the old Schreiner Bank in Kerrville; a drum with an interior light that shows off a garish sunset scene on the drumhead; photographs of Charles Whitman and Slim Whitman, hung side by side in the kitchen; a magnificent silver and bronze chess set from Lebanon; a portrait of Jesus with a 3-D effect; and a wood sculpture holding a yarmulke.

When the Beaufords, as the Friedman brothers are wont to call themselves, are at the ranch, they sleep most of the day away and stay up all night playing chess and working. Kinky labors over his songs and Roger makes telephone calls, promoting his brother wherever he needs to be promoted. Rumor has it that they amassed the largest unpaid telephone bill in the history of the Hill Country Co-op before the phone was yanked out in February.

Rio Duckworth is not Hollywood’s or even Houston’s idea of a proper Texas ranch, but it has the grey-green magic of the Texas hill country, the breezes smelling of cedar and the whippoorwills singing in the twilight. If the cow country mystique has not moved Kinky to butt a saddle or mend a fence, it has affected his musical tastes and his metaphors. If he were pinned down, he probably would have to claim as his theme song “Ride ’em Jewboy,” a country-western variation on the myth of the Wandering Jew:

RIDE, Ride ’em Jewboy
Ride’em all around the ol’ corral
I’m, I’m with you boy
If I got to ride six million miles

Kinky spent most of 1971 trying to get his songs recorded in Los Angeles, but California just wasn’t ready for him. The Jewish president of Warner Brothers Records said he’d like to give him a contract, “But I don’t know what I’d tell my mother.”

With the exception of playing the pied piper at camp, Kinky has never been overly anxious to perform for audiences. He’s not exactly a virtuoso on the guitar and he takes solace in the fact that Hank Williams could play only three chords. Besides, “I don’t want to be a star. I want to be a millionaire,” Friedman says. During his eight months in L.A. he sang in public only twice, the most memorable occasion being at a celebration of Israel’s 23rd birthday. Kinky remembers, “I went on right after a gypsy fiddler.”

The best thing that came out of Kinky’s Los Angeles experiences was a chance meeting with Chuck Glaser of the Glaser Brothers’ recording studio in Nashville. After hearing some of Friedman’s songs, Glaser urged him to move to Music City. Kinky left the West Coast lickety split. “In Hollywood I totalled my karma,” he wrote in “Flying Down the Freeway,” a song about the exhilaration that came with leaving California.

Things have gone all topsy turvy in Nashville. Kris Kristofferson is wearing full-length leather coats and singing about getting stoned. There’s a black C&W star, Charley Pride, as well as Johnny Rodriquez, a chicano star. Ever since Dylan’s “Nashville Skyline” album, rock & rollers and country singers have been mixing it up. One sees Commander Cody and the Lost Planet Airmen creeping up on the kicker charts while country-western stalwarts like Willie Nelson and Waylon Jennings are finding new and wildly appreciative audiences at places like Armadillo World Headquarters in Austin.

This cultural cross-fertilization augured well for the group. What L.A. record executives were afraid to chance in 1971, three Catholic brothers from Nebraska recorded in 1972. Tompall, Chuck and Jim Glaser are known in their own right as a country trio, but they also own one of the more tasteful recording studios in Nashville. Their biggest hit was John Hartford’s “Gentle on My Mind,” which has provided them the royalty money to encourage other talented but atypical musicians. The Glaser Brothers are not Nashville hippies. To the contrary, they enthusiastically played at benefits for Richard Nixon last year. But, politics aside, they know good music when they hear it, even when it’s attached to titles like “The Top 10 Commandments” and “Get Your Biscuits in the Oven and Your Buns in the Bed.”

Meanwhile, good things were happening for Kinky in New York. Commander Cody turned David Wilkes of Vanguard onto Friedman. Vanguard, which was just getting into the country music field, signed him. Kinky’s first album, Sold American, was recorded at the Glaser studio during the fall. The Glasers pulled together an impressive group of studio musicians and produced a genuine, sometimes innovative country-westem sound. The album includes some stellar fiddle-playing by John Hartford, a somber church organ in “The Top 10 Commandments,” a fine rumbling and whistling effect for “Silver Eagle Express,” and a manic conversation sequence in “Highway Cafe,” featuring Roger Friedman and Tompall Glaser as highway patrolmen describing an accident in which a semi-driver was squashed “slicker ‘en owlshit.”

Being gentleman of the night in Nashville gave Friedman the background for some of his more traditional country western songs, like “Sold American.”

It was around Hanukkah when Roger took the final mixing of the tape to New York for the Vanguard people to hear. Vanguard had been a little uneasy about the record. The meat and potatoes of the label always has been classical music along with some solid, left-wing folkies like Joan Baez, Odetta and Buffy St. Marie. Country-western was uncharted country for Vanguard. And then there was the question of taste… There are lots of Jews in the record business, but Vanguard is the most Jewish label of them all. Everyone was nervous about the Jewboy bit. How would the Jewish rackers who stock the discount houses feel? How about the Anti-Defamation League?

The troops crowded into one of the listening rooms for the preview. There were smiles of relief as the songs rolled out, one good one after another. And there was recognition of the plaintive, lonely quality of the Glaser Brother’s arrangements. By the end of “Ride ‘Em Jewboy,” there wasn’t a dry eye in the room. You could say that, at least in Vanguard’s New York office, the album was a smash, a hit, a very big success. About 15 New York Jews left the room feeling a tremendous rapport with faded, jaded cowboy stars.

The album was scheduled for release in late March and Kinky premiered in Texas about the same time. “I expect to sell two albums per Jew,” Kinky said optimistically. “I’m going to give one third of the royalties to the JDL—the Jewish Defense League—one third to the ADL—Anti-Defamation League—and one third to the ABL—the American Bowling League.”