Lucy Griffith first saw “the burro lady” out in far West Texas back in the eighties, trundling along highways on the back of her animal with blankets and knapsacks. Griffith would see her riding from Alpine to Marfa to Van Horn to Valentine, often camping without a tent, sleeping outdoors in the frigid wind and searing summers.

In those days, Griffith, 70, who hails from Comfort, traveled to the Big Bend area several times a year and was struck by the woman in the big-brimmed hat who rode a burro along remote roads. Locals had all seen her riding throughout the region, but few had spoken with the reticent wanderer. But Bill Ivey, a resident of Terlingua who received the woman’s checks for her, was one of them: as he told Griffith, her name was Judy Ann Magers, and she’d been riding out in West Texas for years.

In 2016, while taking a writing class at the Writers’ League of Texas summer conference in Alpine, Griffith found her thoughts drifting to Magers, who had died by then from a heart attack at the age of 65, and the life she led. In an assignment for a “persona” poem, Griffith wrote in the woman’s imagined voice: “Do not lay your story over mine,” she says at the end of the poem.

Griffith learned only a few facts about Magers from West Texas locals, including that she was from the Midwest, she had five children and many grandchildren, and the various burros she rode were supplied by a trader in Van Horn. These facts were less interesting to her than thinking about Magers’s spirit, though. In writing poems about a woman she’d never met, Griffith wasn’t trying to uncover her biography or “fill in the blanks.” 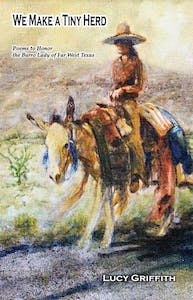 Titled “La Reina,” the poem opens Griffith’s first collection of poetry, We Make a Tiny Herd—Poems to Honor the Burro Lady of Far West Texas. Published last year by the Main Street Rag Publishing Company, the book gathers Griffith’s writings on Magers (often called La Reina, or The Queen, by West Texas locals) over three years. It has since gone on to win two major prizes in the literary universe—the “Wrangler,” a Western Heritage Award for poetry, to be presented in April 2021 at the National Cowboy & Western Heritage Museum in Oklahoma City, and the Willa, in honor of novelist Willa Cather, which Griffith received this fall.

Born in San Antonio, Lucy Griffith grew up in the city and on a ranch, called Esperanza, near Cotulla in South Texas. Griffith, who had grown up around cowboys, could tell by the way Magers rode that she was a skilled horsewoman. Though she worked as a clinical psychologist and is now retired, Griffith’s fascination with poetry started in her college days, and paralleled the poet Yusef Komunyakaa’s belief that one writes “to find out what you don’t know that you know.” She says: “I think that my heart is full of the stories my clients trusted me with and perhaps they resonate in my poems. We are all people of many layers.” She also identified with poet Carl Phillips’s idea that poetry often springs from “unexplored messages from the interior.”

As Griffith tells it, that first poem she wrote about Magers “kicked off something huge in me that I didn’t really understand.” She kept writing what eventually became a collection of tender, unsentimental poems that invite readers to ruminate about possibility and alternate routes. In her verses, Griffith neither sensationalizes nor explains, which may account for the profound eloquence of these poems. One could open to any page and extract a single line to ride with, for a week or a day: “Use what’s at hand. You’d be surprised what’s thrown away,” she writes. In another passage, she says: “Know where water is. Have a plan.”

These last two quotes are from a section in Griffith’s book in which the burro “speaks.” In reality, Magers’s last burro, Merle, whined for more than a day after she died; he was taken to California by one of Magers’s sons afterward. All of her Magers’s children attended her funeral, which took place in Terlingua, as was her final wish. And the story goes on.

Naomi Shihab Nye is on faculty at Texas State University, and has been named Young People’s Poet Laureate of the United States by the Poetry Foundation.