For the better part of last year, Houston’s own Megan Thee Stallion was the most exciting rapper in the world. After releasing her 2019 mixtape, Fever, she commanded an entire season—the now famous “Hot Girl Summer”—and kept listeners tuned in by releasing bewitching freestyles and personable social media updates on the regular; she often used her Twitter account, for instance, to candidly respond to fans attempting to twerk on her level. With all that and her natural magnetism, Megan quickly ascended from a hometown favorite into an internationally known supernova.

Last week, Megan was in the limelight once again—this time because of a maelstrom of opinions surrounding a contract dispute between the 25-year-old artist and her label, 1501 Certified Entertainment, which began when Megan asked to renegotiate her contract. The request resulted in 1501 preventing her from dropping new music, a move that led Megan to file a lawsuit against 1501 and its CEO, Carl Crawford. After a judge signed a temporary restraining order, allowing Megan to release music, she released a new EP, Suga, on Friday, March 6. Named for her new, more emotionally “sensitive” musical alter ego, the nine-track project was originally scheduled to be released on May 2, on Megan’s late mother Holly’s birthday.

Before Suga, she had another alter ego—the good time-seeker Hot Girl Meg of Fever—and before that, the effortlessly cool Tina Snow, of the eponymous EP. Her continual persona-fashioning parallels the figure she’s long modeled herself after, Pimp C of Port Arthur’s Underground Kingz (better known as UGK). Like Megan, Pimp C creatively thrived off of manifesting new characters for himself, such as Tony Snow, Sweet James Jones, and Jack Tripper. In the cases of both musicians, the more characters that we’re introduced to, the more difficult it becomes to tell them distinctively apart.

The roles Megan has developed are fun in theory but hard to pull off in practice as they grow in number; for that reason, Suga should be seen, and heard, as an extension of Megan the established MC, instead of a whole new rapping style inspired by a superficial update in a cast of characters. With this EP, Megan is locking herself into place as an artist who’s confident enough to continually reinvent herself. She may not be fully formed in each evolution, but every step up to the plate brings her to a more refined state regardless. 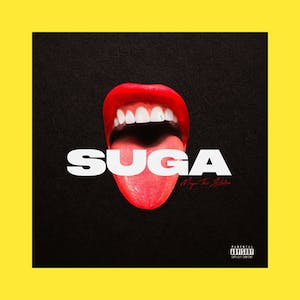 Megan sounds like herself—the punched-up, boastful powerhouse—at the start of Suga, with the opener, “Ain’t Equal.” It’s almost too similar to the Megan we’ve heard before: her flow closely mirrors the approach she used in Tina Snow standout “Freak Nasty.” (“I’m running through your nigga house like the Tomb Raider” is the “Freak Nasty” line that immediately came to mind when “Ain’t Equal” started.)

But everything changes at the forty-second mark, when Megan siccs the beat: the bass kicks in, its blown-out rattling enough to make you want to grab your car keys and swang through the streets of Houston, with the trunk waving. The production alternates between full power and just hype enough for Megan to spit about her lack of competition, though she closes the song with a line that sounds especially eerie, given her nebulous label situation: “When I started making money, that’s when everybody changed.”

Meanwhile, the next song on the EP, “Savage,” is a marked shift from anything we’ve yet heard from Megan. Produced by J. White Did It (known for assembling earworm beats for stars Cardi B and Gucci Mane, among others), “Savage” brings to mind Lil’ Kim’s song “Crush on You,” with kicked-back, key-driven production. She flexes in a way that makes her sound unbothered, but her delivery is always pointedly direct, as if she’s rapping with a finger in your face. The chorus is simple, effective, and easily memorable: “I’m a savage / Classy, bougie, ratchet / Sassy, moody, nasty / Acting stupid, what’s happening? / Bitch, what’s happening?” My sister Geordai had it down the same day the project dropped.

Megan takes another swing with “Captain Hook,” a song that starts with a sword singing, as if being unsheathed. Her longtime producer, LilJuMadeDaBeat, makes this sound the song’s central focus, and Megan cuts through the production with new cadences and a vocal malleability we haven’t heard before; she starts with a double-time attack at the beginning of the track, and relaxes to spit from a comfortable pocket in the second half, reflecting more than one character within a single song. “I like to switch up my style every week,” she raps assertively near the top of the song, sounding like Hot Girl Meg. She borrows from SoundCloud rap tradition during the chorus—by sounding purposely lackadaisical and liberally using ad-libs—and turns up a baby voice in the middle of her verses. Then, she sounds assuredly like the new Suga before returning to her authoritative register to finish out the verse.

Other songs aren’t as inventive. “Hit My Phone,” a West Coast vibe featuring Kehlani that stands out from the region-averse production heard across Suga, and “Rich,” a song that sounds stylistically like a Fever bonus track, both resound like one-off loosies. This EP is supposed to be a presentation of Megan’s new character and a new direction, but these tracks sound like throwbacks or someone else’s music. While Megan is free to experiment in whatever direction she chooses, cohesion in a project as short as Suga is key.

Still, Suga’s lead single, “B.I.T.C.H.,” fits in better with the album than as a standalone offering. Since its January release, it’s been a slow burn, becoming fun to sing along to the more you hear it. (Especially if you’re a fan of the song’s inspiration, 2Pac’s “Ratha Be Ya Nigga.”) Megan says everything anyone in a certain situationship would love to express to their would-be partner; it’s a low-key anthem for the uncommitted looking to make moves.

Two of the EP’s strongest tracks, “Stop Playing” and “Crying in the Car,” were produced by the Neptunes, who were spotted playing back a Megan collaboration a few months ago. “Stop Playing,” which features Gunna, sounds exactly like a track he would be featured on: it’s unassuming and laid-back, with a beat that begs its MCs to stunt in the calmest way possible. (The faux flute floating throughout the track also brings to mind fellow Houston rapper Travis Scott’s “Yosemite,” which featured a rising Gunna.) While the beat sounds custom-made for the Atlanta rapper, Megan makes it her own, dipping back into her Tina Snow bag. Instead of imitating her collaborator, she upgrades her own perfected technique, calmly spitting game about what makes her incomparable: “Before I was rich, I was poppin’ my shit / Now that I’m lit, ain’t shit changed.”

Meanwhile, “Crying in the Car” starts with the Neptunes’ signature four-count intro, and features a sample of chopped-up vocals, backing Megan as she sings in Auto-Tune about the hard times she’s experienced and how she’s managed to bounce back: “All of them nights that I cried in the car / All them tears turned into ice on my arms.” This evocative departure is the highlight of Suga. While Megan notably ended last year’s Fever with “Running Up Freestyle,” an aggressively produced song that cemented her dedication to the art of hip-hop, Suga ends with more Auto-Tuned singing—a leap of faith for an artist who’s widely known for barring out. On the closer “What I Need,” Megan leans fully into the sensitive side of her Suga persona, choosing to be vulnerable instead of overt and forward.

With Suga, Megan Thee Stallion takes a lateral step as she figures out what she wants her next style—and her creative future—to look like. Varied in its brevity, the EP is a morsel just sweet enough to drown out the noise while we anticipate her true debut album.