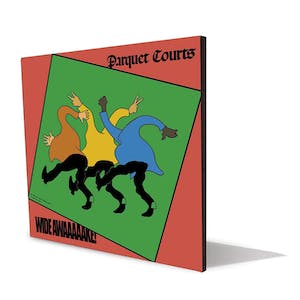 But the resulting album, Wide Awake! (Rough Trade, May 18), doesn’t soften many of the band’s edges. Danger Mouse bakes in his sonic trademarks—stringy synths, spaghetti western guitar, and plenty of funk—but this is still a Parquet Courts record. Songs like “Total Football” have hip-moving basslines but don’t sacrifice the band’s snotty aggression or decidedly non-pop lyrics: “Collectivism and autonomy are not mutually exclusive . . . F— Tom Brady.”

Wide Awake! brings to mind another exclamation-mark album, the Clash’s Sandinista!, which also used punk energy to explore a broad sonic palette. Parquet Courts, like the Clash before them, eschew genre purity to play with arrangements that would thrive both on dance floors and in mosh pits. In that sense, Wide Awake! isn’t a crossover, it’s an expansion.

Listen to the title track:

The Top Twenty Texas Albums Of 2016 (According To Us)