“West Texas, the Big Bend, this area—are you the platonic ideal of the Texan?” Anthony Bourdain poses that question at the top of the fifth episode of Parts Unknown’s twelfth and final season. And—just as he did when documenting Houston, Hanoi, or anywhere in between for the travel show—the host, who died earlier this year, allows the answer to emerge through the people he meets along the way. As Bourdain dines, drinks, and adventures in the far West Texas episode, which aired on Sunday night, he takes the pulse of West Texans, gathering their views on everything from gas station tacos to the border wall.

The episode begins with Bourdain driving at dusk down a lonely stretch of highway. He flips through the radio. A snippet of Tejano scrambles through the static before the dial lands on Marfa Public Radio. “From the Basin to the border,” the announcer says, “out here in West Texas, we’re coming to you live.” As a native West Texan, it felt familiar to me—endless stretches of blacktop, surrounded by a sea of mesquite and spindly ocotillo, leading from one nowhere to a slightly less nowhere are distinguishing features of the region. The scene also helps orient the place Bourdain’s about to tour: a huge and sparsely populated corner of the state defined by rugged mountain ranges and the stark, wide-open beauty of the Chihuahuan Desert. Just as we arrive at Bourdain’s first stop, the Means Family Ranch, near Van Horn, raucous punk fires up, creating an unusual but fitting juxtaposition of the music’s frenetic energy with the gritty chore of working cattle.

This ranch has been in the Means Family for four generations, and its proprietors are sticklers for tradition. They still work their cattle exclusively on horseback, increasingly rare in a world where ATVs, off-road trucks, and helicopters have become commonplace. Meals are still prepared in a traditional manner as well. The family slaughters a goat to make fresh cabrito on a metal disca, which they serve alongside jalapeño-cheese grits, deep-fried jalapeños, and buttermilk biscuits baked in a cast-iron Dutch oven. It’s the kind of campout meal that will make your mouth water, even if it’s coated in the dust of a working cattle ranch.

“How do you make a living?” Bourdain asks his hosts. One of the cowboys laughs, “Work like hell, and don’t spend any money. You just have to have the heart to stay. If you’ve got a weak heart, you won’t last.”

From the Means spread, Bourdain heads southeast to Marfa, where the music on the radio changes abruptly from ranchera to electronic indie pop. “I drove three hours through ghost towns and dead gas stations and nothing but nothing, you know. Suddenly I arrived in Marfa,” Bourdain narrates. “It’s like, ‘Would you like some bruschetta, some salumi, some $900 ponchos?’ What’s going on?”

The answer comes via Ty Mitchell, the grizzled, eye-patched proprietor of Marfa’s Lost Horse Saloon. “Marfa has become three distinct cultures: tourist town, art town, cowboy town,” Mitchell says in a flat drawl. “You can get calamari in Marfa. Who’da thunk it twenty years ago? Nobody even knew what the word meant.”

Bourdain and Mitchell, both in dust-coated cowboy boots, chat over Lone Stars in the Lost Horse while dogs, locals, tourists, and a baby goat hang out around them inside the bar. “Every cowboy has a dream of owning a saloon,” Mitchell says, lighting a cigarette. “There’s so many cultures that come through here—hipsters, blue-collar city workers—and I wanted everybody to be able to have a good time. There ain’t gonna be but one intimidating sumbitch in my bar, and that’s me.” The banter eventually comes around to the proposed border wall. Mitchell, who’s spent decades cowboying and roughnecking in the region, stresses the friendship he and others feel for their southern neighbors. “Loyalty is a big thing in Texas,” he says, “and you ain’t gonna build a fence between me and my loyal friends.”

Again, the scratchy FM radio is used to convey the time and tedium of driving, and this time the destination is Marathon, sixty miles from Marfa. As Bourdain speeds along in the darkness, David Beebe, a Marfa Public Radio deejay (and Presidio County justice of the peace) tells his listeners, “It’s time to go outside and look up at the stars and enjoy the place that you live.” The camera then moves across the night sky in a trippy cosmic sequence—perhaps a winking tribute to the McDonald Observatory, in Fort Davis, a place conspicuously missing from Bourdain’s tour of far West Texas.

In Marathon’s Gage Hotel, seated beneath the mount of the famous white buffalo, Bourdain dines with writer and Del Rio native Roger D. Hodge. The two delve into Texas history, discussing the conquest of the indigenous Apache people by the Spanish, Mexican, and Texian governments. And, this being Texas, both men consume thick cuts of ribeye as they talk.

The discussion of indigenous cultures is interspersed with images of the pictographs from the nearby (in West Texas mileage) White Shaman site, in Seminole Canyon State Park. There’s a quick scene in which Texas State University professor Carolyn Boyd explains the 4,000-year-old mural’s importance to understanding the region’s history, which has evidence of human life going back over 12,000 years.

They continue the conversation at a dive bar in Alpine called Harry’s Tinaja. Hodge and Bourdain are joined by Boyd and archeologist Elton Prewitt, who discuss Texas’s earliest inhabitants—groups of people who had complex and vibrant cultures, with religious practices and a profound appreciation for the stars. This scholarly discussion takes place set against a boisterous bar scene, and before long Bourdain and his subjects are drawn into the party. The scene ends with Bourdain playing beer pong. The tall, wiry 61-year-old grins like a college freshman as he sinks a ball into a Solo cup, while a cowboy blows his harmonica like a freight train in the background.

The episode continues with a quick detour back to Marfa—first to discuss the nature-inspired art of the late Donald Judd with his daughter, Rainer, and then to highlight homemade dishes prepared by longtime Marfans in their own kitchens: menudo, blue-corn tortillas, mesquite-bean-flour empanadas, and tamales. And, yes, as many have seen hyped in the advertisements leading up to the episode’s release, Bourdain visits a Laredo Taco Company at the local Stripes gas station. He orders barbacoa. “Unbelievable,” he says. “At a gas station.”

Through his conversations with locals, Bourdain paints a nuanced picture of Marfa’s growing pains, which have been spurred by its burgeoning art scene and increased tourism. Although some hail these recent changes as “saving a dying town,” others see natives being pushed out and the local culture undergoing an unwanted transformation. An activist with the Adobe Alliance, Sandro Canovas, walks Bourdain through the process of building with the mud-based material. “Straw, clay, water, manure—that’s what makes adobe,” he explains. “The tradition of adobe is barely alive, because of what’s happening with the gentrification of Marfa. The Mexican American minorities are being displaced,” he says, specifically because of new taxes aimed at adobe structures.

The next stop is Presidio, where we follow a young woman, Molly Ferguson, as she pedals her bicycle through the town, to the border checkpoint, and over the international bridge into Ojinaga. There, she hops on the back of her boyfriend’s motorcycle, and they race around the city in slow-mo. At El Mexico de Ayer, a restaurant overlooking the town with views of the Christmas Mountains, Bourdain sits down to a meal with the mayor of Presidio and the former mayor of Ojinaga. “We’re basically one town here,” the Presidio mayor says. As someone who recently made the trip across the bridge on foot to eat at the same restaurant, I can confirm that the meat they’re eating—ribeye, arrechera, and an assembly of sausage—is even better than it looks.

The grand finale is a trip through Santa Elena Canyon, on the Rio Grande in Big Bend National Park. Bourdain and his river guides paddle between the 1,500-foot limestone cliffs on the thin ribbon of water demarcating one country from one another. When they stop to make camp for the night in Fern Canyon, Bourdain helps pull his canoe from the river. They make food (meat, peppers, and onions on a disca), toss a frisbee, and Bourdain plunges from a tall rock into the water. Taking in the majesty of his surroundings, Bourdain ventures an opinion he’s formed after years of traveling the globe: “I’ve been to a few places where they do have a wall,” he says. “Few things are uglier in the entire world, of all the places I’ve seen. Few things have been more an indication of an utter failure of otherwise smart people to figure shit out.”

“Thank you for showing me this ludicrously amazing place,” Bourdain tells the river guides. After the episode ended with Bourdain driving again into a night just beginning to glister with starlight, I couldn’t help but wish I had the chance to tell him thanks for seeking out the heart of West Texas and not the easy stereotypes. And even more importantly, thank him for allowing the people out there to speak for themselves. I think their response to his first question was pretty clear: yeah, we are the platonic ideal of the Texan. But then again, I might be just a little biased. 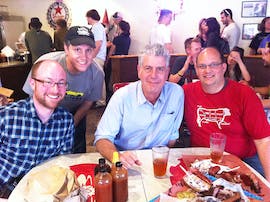 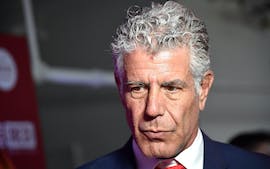