The spirit of the shrug emoji lies at the heart of Pins and Needles, Texas Monthly’s biweekly craft column (see the first two installments here and here). There’s a lot to worry about in the world today, and these crafts are not serious at all! I want these projects to be a fun way to spend some hours of our now exorbitant amount of indoor time on things that are both Texas-related and useful. Hopefully they all conclude with pleasant surprise and, “Hey, that doesn’t look so bad. In fact, it looks pretty good!” The idea is to take something you don’t know how to do, and then learn how to do it without putting any pressure on yourself to get it perfect, or even really get it right.

That’s how I approach many things in my life. The week’s project, for example, involved clay sculpting, something that hasn’t exactly been a skill of mine (please do not ask me about the pottery wheel class I took last year). It would have been safe to just try and make pinch pots, but I aimed a little higher. In the spirit of making something useful—and being of the mind that historical information is always useful—I decided to sculpt an important figure from our state’s past, Tejana labor activist Emma Tenayuca. She helped organize the 1938 pecan shellers’ strike on the West Side of San Antonio.

If you haven’t heard of her, here’s a brief of summary of her badassery: Born into a Mexican-Comanche family on San Antonio’s West Side, Tenayuca went to her first political rally at the age of six, and was arrested for the first time ten years later at a protest against a local cigar manufacturer. When she was twenty, she helped an estimated eight thousand mostly Hispanic San Antonio pecan shellers to walk off their jobs in protest of the poor conditions they were working under for very little pay. For her activism she was nicknamed “La Pasionaria” or “The Passionate One.”

Tenayuca’s methods were successful. Prior to the strike, pecan shellers had been paid pitifully (six to seven cents per pound for the pecan “meat” they produced, with an average yearly income of less than $300, or about $5,500 in 2020 bucks). After winning the strike, pecan shellers started making 25 cents per hour, the minimum wage required by the Fair Standards Act at the time. (According to a chapter in Stephen Harrigan’s invaluable Texas history tome Big Wonderful Thing, the pecan shelling companies had justified the gross underpayment in a horrifying way: “The Mexicans don’t want much money. Compared to those shanties they live in, the pecan shelleries are fine. They are glad to have a warm place to sit in the winter. They can be warm while they’re shelling pecans, they can talk to their friends while they’re working … if they’re hungry, they can eat pecans.”)

There’s so much to say about Tenayuca, and I encourage you to do more research on your own. But anyway, back to crafts! I decided I would sculpt Tenayuca and a pecan tree from the air-dry clay I had left over from my crepe-paper wildflowers project. Having not the faintest idea how to build a human form, I looked it up on the internet and found this helpful video, adapting it to give her bottom half a blocky skirt shape instead of human legs. 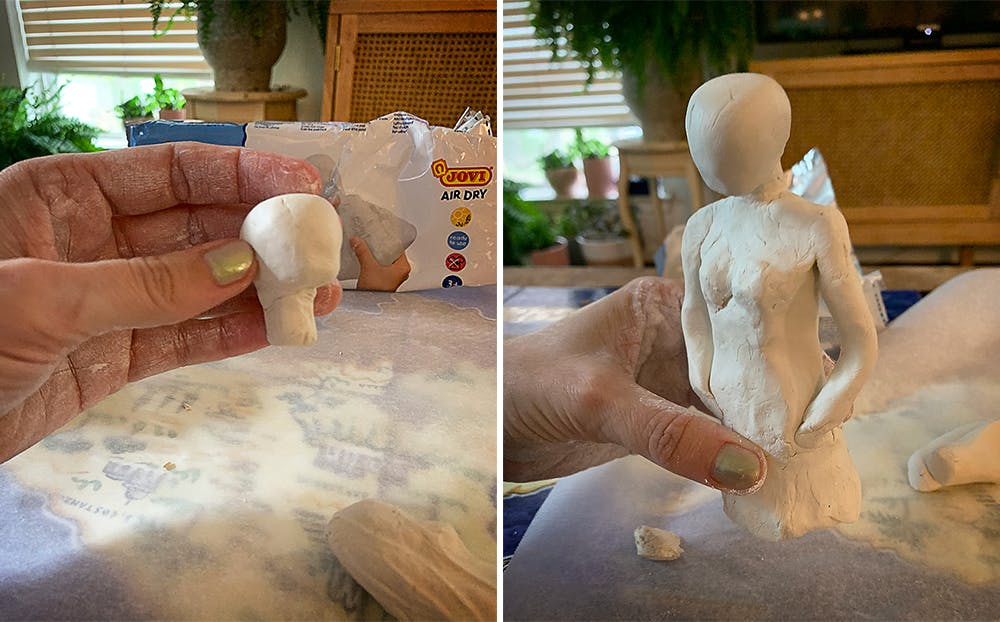 To keep her standing, I used wooden dowel rods, which I stuck into the skirty block and then shaped legs and feet around. You could probably use toothpicks, but I happened to have these dowel rods left over from when I tried to make a multitiered wedding cake for the most recent Bachelor finale (it’s a long story). 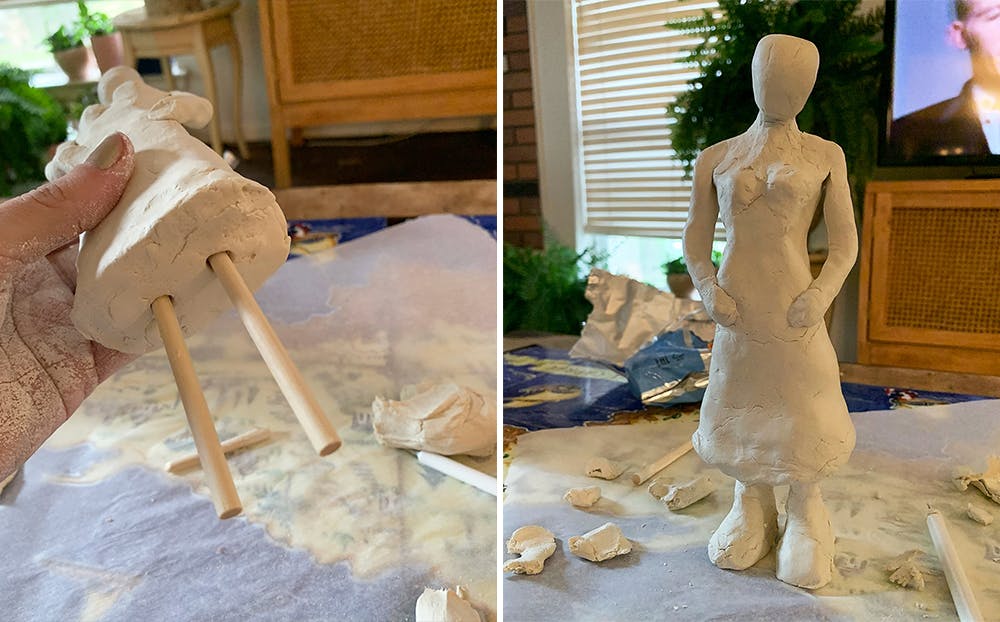 As you can see, Clay Emma’s legs are quite sturdy. But she still wouldn’t remain standing, so I made a flat piece of clay for her to stand on, which I would later paint like grass. Then I added a little bit of clay to her arms to make it look like she had short sleeves on, and made little triangles of clay, which I placed on her collarbone to act as the lapels of her dress. I made what looked like the shape of a messy, low bun for her hair. Finally, I added a few buttons on the front, and then set her aside to dry.

The tree was laughably difficult to make. I had no idea what I was doing, and when I remembered how pecan trees actually look—that their branches and leaves spread out real wide—I panicked a little about making something out of clay that would be that top-heavy. I decided to use the metal flower rods I used for the last post. I sculpted a trunk, stuck a rod in it for stability, then took rods and stuck them in the trunk, using wire cutters to shorten them to be branch length. Then I very carefully covered each wire “branch” with clay, knowing one false move could bring the whole thing down.

Eventually I had something resembling a leafless tree, which I carefully placed next to my Emma Tenayuca. I ignored them both for two days so the clay could dry—in a place where my cats couldn’t get to them. 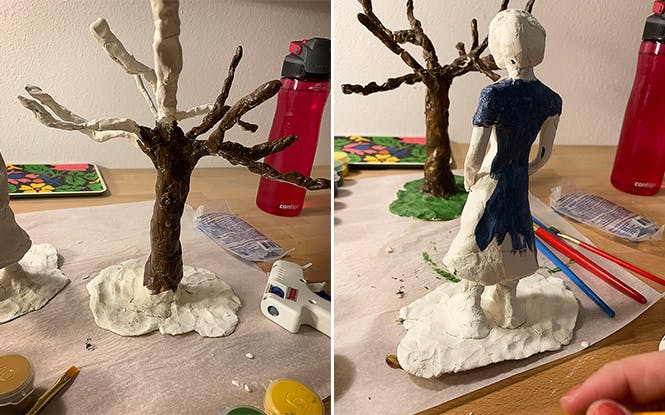 After 48 hours, it was time to paint! I used these acrylic paints and these paintbrushes from Michaels, but any kind of paint should do. I didn’t do any fancy painting—I just applied a dark brown color to the trunk and branches, and then worked some tan in there to give it definition. It didn’t really make the thing look any nicer, but it was enjoyable for me personally. I painted the bottom green, because grass. 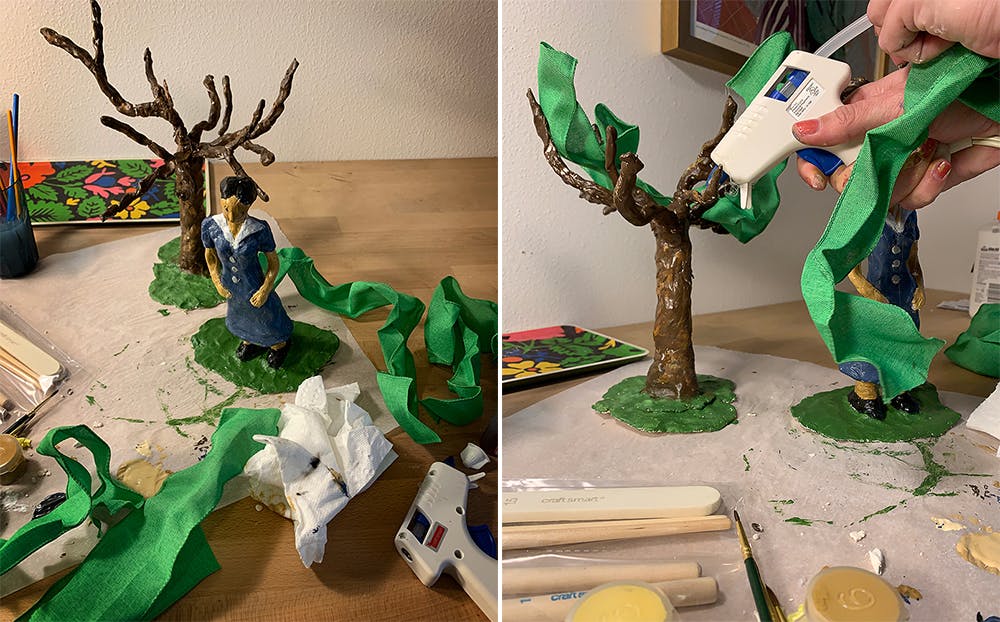 Then I painted Emma, giving her a denim blue dress with a white collar and gray buttons, and black shoes. I made her hair black and her skin olive. Then I painted the bottom green, and turned my attention back to the pecan tree.

There was no way I was going to keep that thing standing by overloading it with clay “leaves,” so I decided I would use some green ribbon I had hanging around. You could also use crepe or tissue paper for this, or cotton balls that you paint green. Anything that is light and looks leafy, however cartoonish it might be, will do. I crumpled up cut up strips of ribbon and started hot-gluing it to branches. 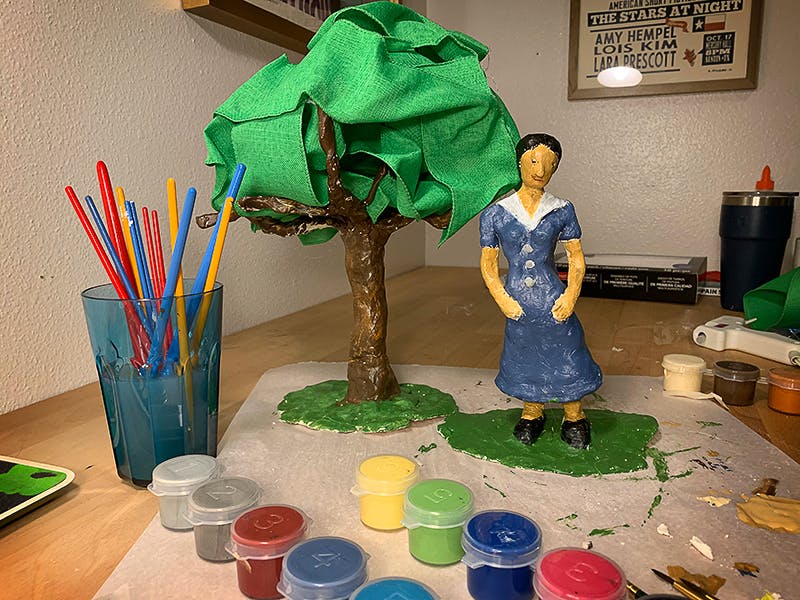 I tried to keep it messy and bulbous-looking, with some branches covered and the lower ones visible as they usually are with a regular tree.

When I was done, I took a step back and said: “Hey, that doesn’t look so bad.” I’ll bring these gems into the office as soon as I am allowed to work in one again. But for now and the foreseeable future, these beauties have earned a spot on a tall bookshelf, where my cats can’t reach. Happy crafting!