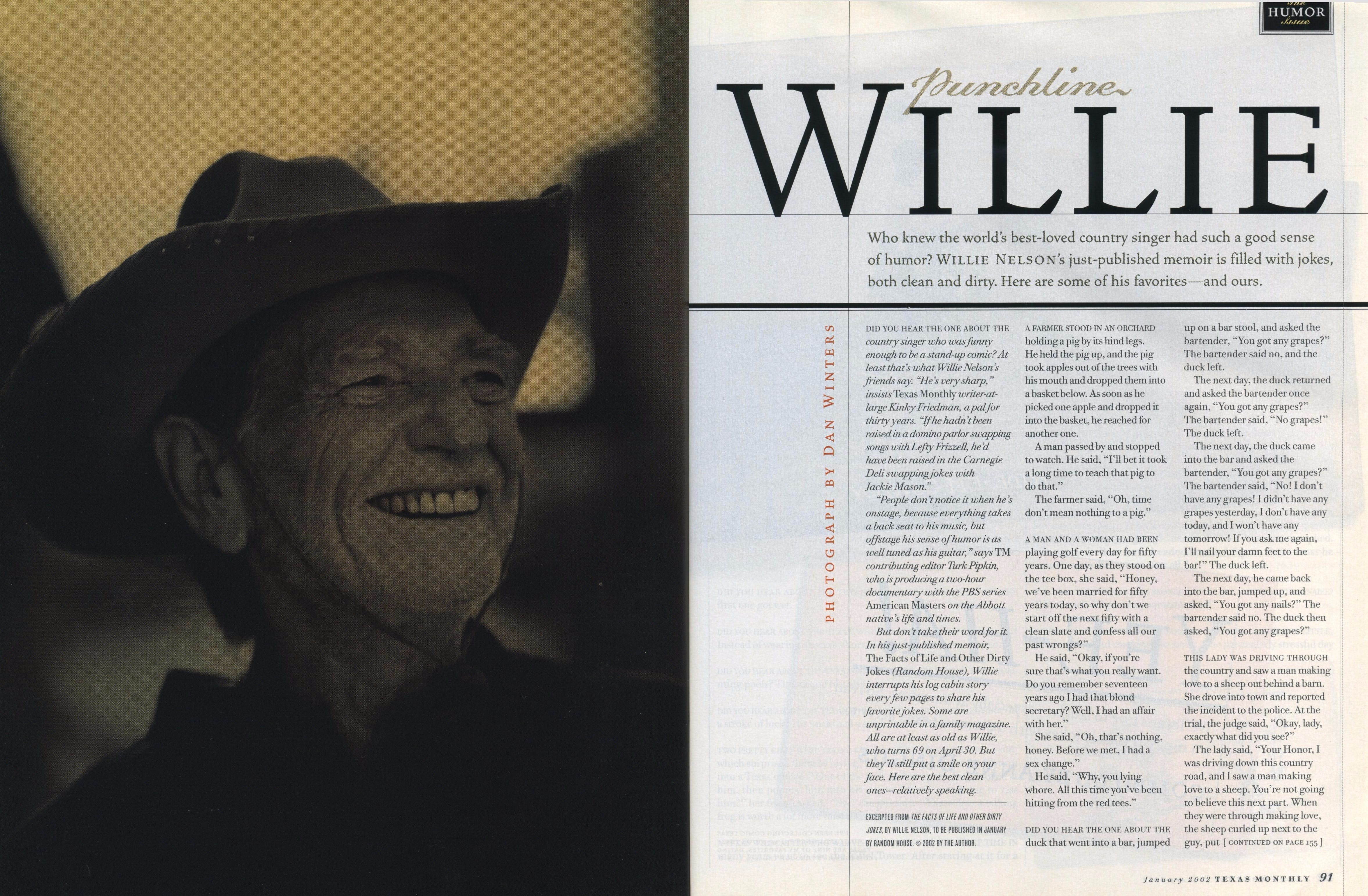 Did you hear the one about the country singer who was funny enough to be a stand-up comic? At least that’s what Willie Nelson’s friends say. “He’s very sharp,” insists Texas Monthly writer-at-large Kinky Friedman, a pal for thirty years. “If he hadn’t been raised in a domino parlor swapping songs with Lefty Frizzell, he’d have been raised in the Carnegie Deli swapping jokes with Jackie Mason.”

“People don’t notice it when he’s onstage, because everything takes a back seat to his music, but offstage his sense of humor is as well tuned as his guitar,” says TM contributing editor Turk Pipkin, who is producing a two-hour documentary with the PBS series American Masters on the Abbott native’s life and times.

But don’t take their word for it. In his just-published memoir, The Facts of Life and Other Dirty Jokes (Random House), Willie interrupts his log cabin story every few pages to share his favorite jokes. Some are unprintable in a family magazine. All are at least as old as Willie, who turns 69 on April 30. But they’ll still put a smile on your face. Here are the best clean ones—relatively speaking.

A FARMER STOOD IN AN ORCHARD holding a pig by its hind legs. He held the pig up, and the pig took apples out of the trees with his mouth and dropped them into a basket below. As soon as he picked one apple and dropped it into the basket, he reached for another one.

A man passed by and stopped to watch. He said, “I’ll bet it took a long time to teach that pig to do that.”

The farmer said, “Oh, time don’t mean nothing to a pig.”

A MAN AND A WOMAN HAD BEEN PLAYING golf every day for fifty years. One day, as they stood on the tee box, she said, “Honey, we’ve been married for fifty years today, so why don’t we start off the next fifty with a clean slate and confess all our past wrongs?

“He said, “Okay, if you’re sure that’s what you really want. Do you remember seventeen years ago I had that blond secretary? Well, I had an affair with her.”

He said, “Why, you lying whore. All this time you’ve been hitting from the red tees.”

THIS LADY WAS DRIVING THROUGH the country and saw a man making love to a sheep out behind a barn. She drove into town and reported the incident to the police. At the trial, the judge said, “Okay, lady, exactly what did you see?”

The lady said, “Your Honor, I was driving down this country road, and I saw a man making love to a sheep. You’re not going to believe this next part. When they were through making love, the sheep curled up next to the guy, put its head on the guy’s shoulder, and just went to sleep.”One guy on the jury leaned over to another juror and whispered, “Yeah, they’ll do that.”

A BLONDE WENT INTO A BODY SHOP to get a couple of dents on her car fixed. The guy at the body shop decided to play a joke on her. He said, “You can save a lot of money if you want to. Blow on the exhaust pipe and all the dents will come out of your car.”The blonde said, “Thanks, I’ll try that.”

She went home, parked in the driveway, crawled under the car, and started blowing on the exhaust pipe. She was blowing and blowing when her friend, another blonde, came over and asked, “What in the hell are you doing?”

The first blonde said, “I’m trying to blow the dents out of my car.”

Her friend said, “Duh! You’ve gotta roll up the windows.”

A LADY HAD BEEN GROCERY SHOPPING and was walking to her car when she tripped and broke a paper bag containing a gallon of water, a dozen eggs, and a pound of bacon. Everything splattered all over the pavement. The lady was so upset that she started crying. A drunk walked up, surveyed the situation, and said, “Don’t cry, lady. It wouldn’t have lived anyway. Its eyes are too far apart.”

THESE GUYS WERE PLAYING GOLF one day when a funeral passed by on the road next to the golf course. One of the players took off his hat and waited until the funeral procession passed. One of his fellow golfers said, “That’s mighty respectable of you to do that.

“The guy said, “It’s the least I can do for her. We would have been married twenty years today.”

DID YOU HEAR ABOUT THE DRUNK who leaned a little too close to a two-story apartment building window and fell out? He was lying on the sidewalk when someone ran up and asked what happened. The drunk looked up and said, “Hell, I don’t know. I just got here.”

THERE WAS A GUY WHO HAD BEEN in a coma for a long time. They had given up on him ever recovering. He was lying in bed when an aroma came down the hall and into the bedroom. Once the aroma reached his nostrils, he opened his eyes. It was the smell of his favorite food: chocolate cookies. The man awoke and crawled down the hall toward the aroma. Sure enough, when he reached the kitchen, there they were: hot chocolate cookies, cooling on the table. He pulled himself up onto the table to grab one of the cookies. Suddenly his wife came over, slapped his hand, and said, “No, no, honey. These are for the funeral.”

DID YOU HEAR ABOUT THE DRUNK who was walking down the street when a guy carrying a huge grandfather clock came out of an antique store and bumped into him? The drunk accidentally knocked the clock out of the guy’s hands, breaking it into a thousand pieces. The guy with the clock asked, “Why don’t you watch where you’re going?”

The drunk looked at the guy and said, “Why don’t you carry a wristwatch like everybody else?”

A LADY WENT INTO A DRUGSTORE and asked if they had Viagra. The druggist said they did. The lady asked, “Have you ever tried it?” He said he had. She then asked, “Can you get it over the counter?” He said, “I think I could—if I took two.”