On her sophomore album, Revival, released in 2015, Selena Gomez danced around the idea of vulnerability. While she bared herself (literally) on the album’s cover, the songs didn’t delve much deeper below the surface. In the years since, the Grand Prairie native has opened up about her struggle with mental health after multiple stints in rehab, went through two breakups in the public eye, and underwent a nine-hour surgery for a kidney transplant.

Anyone would forgive Gomez for wanting to leave her pain in the past, but she started writing about it instead. And on her new album, Rare, released last week on Interscope Records, she finished the transformation from polished Disney starlet to bonafide pop star that she’d started on her last album. Rare drops the pretense present on Revival—you won’t find any spoken word monologues or overly produced ballads this time around—and instead celebrates Gomez coming out the other side. From the unconventional single “Lose You to Love Me” to “A Sweeter Place,” each song tells a different story about Gomez’s ongoing creative evolution, and the heartache she’s endured along the way.

That inevitably involves Justin Bieber, Gomez’s on-again, off-again ex-boyfriend. For years, the two have traded verses and Instagram comments about each other, chumming the waters for rabid fans and gossip sites eager to dissect their tumultuous relationship. The Canadian singer has professed his love for Gomez, expressed regrets about cheating, asked for her friendship, and tried to rekindle their relationship in songs dating back to 2013. But his latest single, “Yummy” (a truly cringe-worthy song dedicated to his wife, Hailey Bieber), served as a final nail in the coffin of their relationship.

In the past, Gomez hasn’t been as outspoken about their relationship in her music. And though Rare does touch on the past romance, this isn’t a conventional breakup album. In “Lose You to Love Me,” Gomez sings: “We’d always go into it blindly/I needed to lose you to find me/This dance it was killing me softly/I needed to hate you to love me.” And later on, in “Look at Her Now,” she details her journey in the third person: “Of course she was sad/But now she’s glad she dodged a bullet (Mm)/Took a few years to soak up the tears/But look at her now, watch her go.” These songs aren’t about trying to get back at Bieber—rather, it’s about acknowledging what it took to move past him. 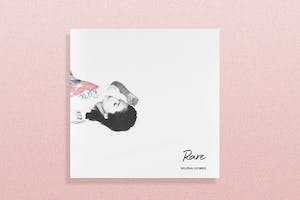 On “Vulnerable,” Gomez tiptoes back and forth over a trancelike beat, trying to decide whether she’s ready to risk being with someone new. In the chorus, she asks: “If I show you all my demons and we dive into the deep end/Would we crash and burn like every time before?” And “Cut You Off” sees her finally closing the door on a toxic ex: “The truth is that I think I’ve had enough/Emotionally messing with my health/How could I confuse that shit for love?” Rare also features “Dance Again,” a techno post-breakup anthem, and “Let Me Get Me” moves hypnotically towards a mantra: “I won’t let me get me,” she sings, reassuring herself that she can get out of her own way and let herself be happy. Gomez’s challenges are ever-present on Rare, even on tracks like the effervescent “Fun,” in which she references putting a “gold star on my disorder” as she flirts with someone who gets her “higher than my medication.”

The album’s production mirrors this openness, too. Where Revival could feel claustrophobic at times, Rare is thoughtfully stripped down. Gomez has never been a vocal powerhouse, and it sounds like she finally isn’t trying to overcompensate by hiding behind overpowering beats. She lets songs like the title track “Rare” show off her falsetto vocals’ subtle strength, while “Cut You Off” and “People You Know” dip into the fuller tones of her alto range. Gomez could have stood to experiment more (in the vein of her delightfully weird past singles like “Fetish” and “Bad Liar”) on the album; still, it resounds as an even-keeled, consistent listen.

By dropping the barrier that had been keeping her listeners at arm’s length, and by giving herself permission to show who she really is, Gomez has released the best album of her career. Rare may not be a contender for the best pop album of the new decade, but it’s a testament to her resiliency—a feat in itself.