Marilyn Descours, a sixty-five-year-old retired restaurant and bakery in La Grange, is an avid supporter of Beto O’Rourke. Her husband thought she was crazy when she showcased her support for the Senate candidate on the bumper of their car, for all in their red-leaning town to see. So when she saw on Instagram a photo of a small, irregular-shaped round object, something like a coin or a token painted red, white, and blue, with the raised, hand-lettered slogan “Beto/Better” she was intrigued. Eventually, she tracked down the item’s creator, a New York City street artist named Beriah Wall.

Wall, 71, has been living and making guerrilla art in New York since the 1980s. The “Beto/Better” coin Descours saw is part of a unique, sprawling, decades-long project, wherein he disperses his tokens in obscure nooks and crannies of the city landscape. He might tuck them into the stonework of building facades, throw them into school yards, or leave them balancing on the door of a parked car if the driver has a bumper sticker he likes.

But Wall’s work manages to spread outside New York. He gives boxes of the tokens to friends traveling abroad, or admirers like Descours who contact him online. When Descours received a box of O’Rourke tokens, she immediately began distributing the coins in La Grange, leaving them on ledges, on the driveways with O’Rourke signs nearby, and impromptu spots like a bench outside of a grocery store. “I put one on my dog’s stomach and took a picture for Instagram,” she says. She also, with Wall’s permission, sold tokens to O’Rourke’s supporters as part of a small, grass-roots fund-raising effort (the $150 raised was duly mailed off to campaign headquarters). Other collaborators are handing out Wall’s O’Rourke-inspired work in Austin, Houston, El Paso, and San Antonio.

Wall has never done an issue-specific campaign outside of New York City before, but his initial support of O’Rourke was inspired by the candidate’s driving tour across the state. “The idea of a Don Quixote taking on Ted Cruz seemed like a great political story, something I’d like to be a part of,” he says. 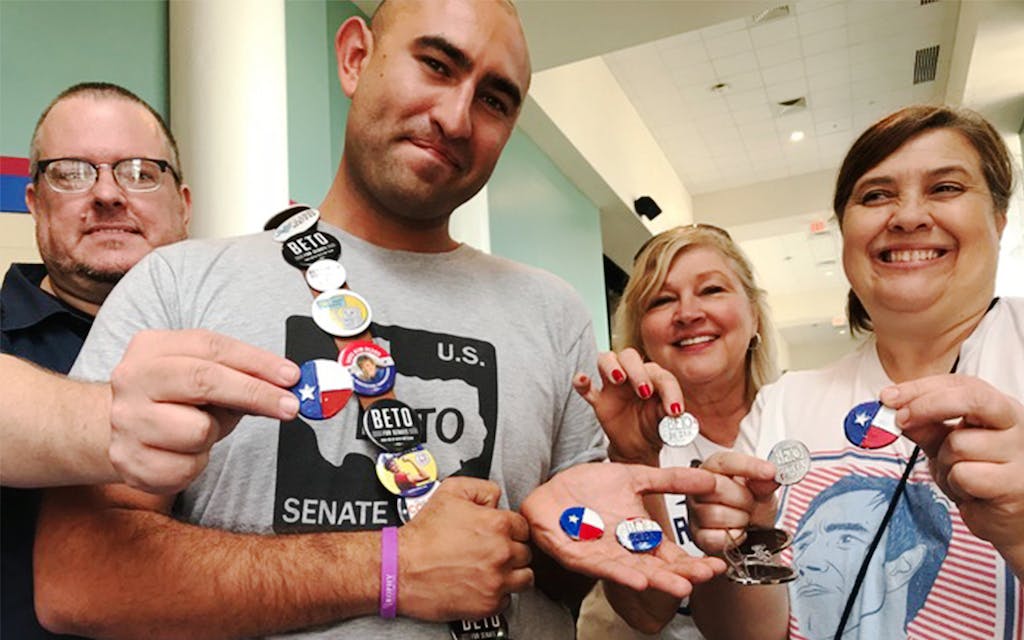 The coins are free and clearly modest in scale—the viewer might easily pass one on the street without noticing it, or mistake it for garbage, a squashed bottle-cap, or a piece of gum. This, Wall says, is a deliberate strategy. “When I was young and ambitious, the guys who were making the coolest stuff were doing vast land-art-type things,” he explains, mentioning Stanley Marsh in Amarillo as an inspiration. “My temperament wasn’t suited to negotiating large projects, so it became my goal to see how far in the opposite direction I could go. How small and insignificant could I be and still have an effect?”

He casts the coins in porcelain clay in issues of four to five hundred at a time, then hand-paints them with oil paints or custom mixtures of pigment suspended in polyurethane. The messages are usually couplets of one or two words per side, and are sometimes overtly political or topical (“Boil/Oil” or “Diesel/Poison”) but more often espouse an ethos for living that’s casual and simple but meaningful nonetheless. “Real/Good” or “Be/Little” or “Truth/Beauty” are, Wall says, “ur-issues” that he presses onto his work, and he has returned to them again and again over the years. There are acknowledgements of human imperfection (“I wish I knew/the answer”), denouncements (“Rich/Greed,” “Bigger/Beggar,” “Urn/Earn”), and many statements that are just little moments of communication that don’t take themselves too seriously, like  “Squish/Squish” or an “Oink” with a drawing on the other side.

The effect is to have a small, anonymous connection or conversation that causes the recipient to pause, have an insight, or just to smile. Wall estimates that he’s made close to a million coins and has spread them as far as Tibet and the Kremlin in Moscow, Russia. He likes to think of his work “on many windowsills and in many pen jars, on the corners of many desks, behind the books on seldom used bookshelves, on many corners waiting to be discovered.” The work is free because “it seemed important to eliminate commerce from the artistic experience. By not worrying about selling them, they can touch more people.”

Gallerist Sallie Mize, the programs manager at the Kentler Gallery in Red Hook, Brooklyn, the New York City neighborhood where Wall lives and works, commented that Wall’s work is “really special” but “totally outside the mainstream of art in New York City”—something like the early days of O’Rourke’s campaign, when he was driving across the state as a relative unknown. Wall is not represented by the Kentler, but he donates work to its benefits and often leaves coins on the gallery doors for Mize to find in the morning. The “defining element,” she says, is that it’s currency, but it’s free. “It’s almost subversive because it’s so understated and anti-commerical,” she says. For people in the know, finding the coins is a delight.  Mize once found one endorsing a local councilman in a Brooklyn cemetery, comparatively far from Wall’s Red Hook neighborhood, but still within that councilman’s district. “I was totally shocked,” she says. “I was ecstatic.”

Wall’s O’Rourke series of coins follows others he’s done over the years for various local and national politicians. He has come out against former New York City mayor Rudy Giuliani and made coins in support of Obama for president. A coin endorsing Bernie Sanders found its way to the candidate’s hand. And after the Trump election, a good portion of 2017 was devoted to anti-Trump messaging such as “Donald/Doom,” “He’s dirty/ He lies,” and “Trumpty/Dumpty.”

Cristy Herman, an O’Rourke volunteer now distributing Wall’s work in San Antonio agrees. She too was inspired to campaign by negative feelings about Trump. Herman is an “ambassador”—“the smiley face between the campaign and people”—and has been working full time going to rallies and events, talking to people about her candidate. She uses a series of Wall’s coins with a “Beto/Better” slogan on one side and a Texas flag on the other as a conversation-starter with younger voters. “[Wall] wanted me to just put them places around town and be mysterious” she confides, but she discovered that handing one to someone created a moment of open-mindedness that fostered connection. “When we first started it was so hard to get young people to talk to me,” she says. “They thought Ted Cruz was someone from Iowa who had run for president. They didn’t know he was our senator.” Herman believes the Texas flag on Wall’s coins helped young people realize the issue was for them. And the act of receiving the coin and wondering about it was ice-breaking. “People would look at it and look at it and smile,” Herman says. “They would say ‘This is really cool. What is this? I can really keep it?’” 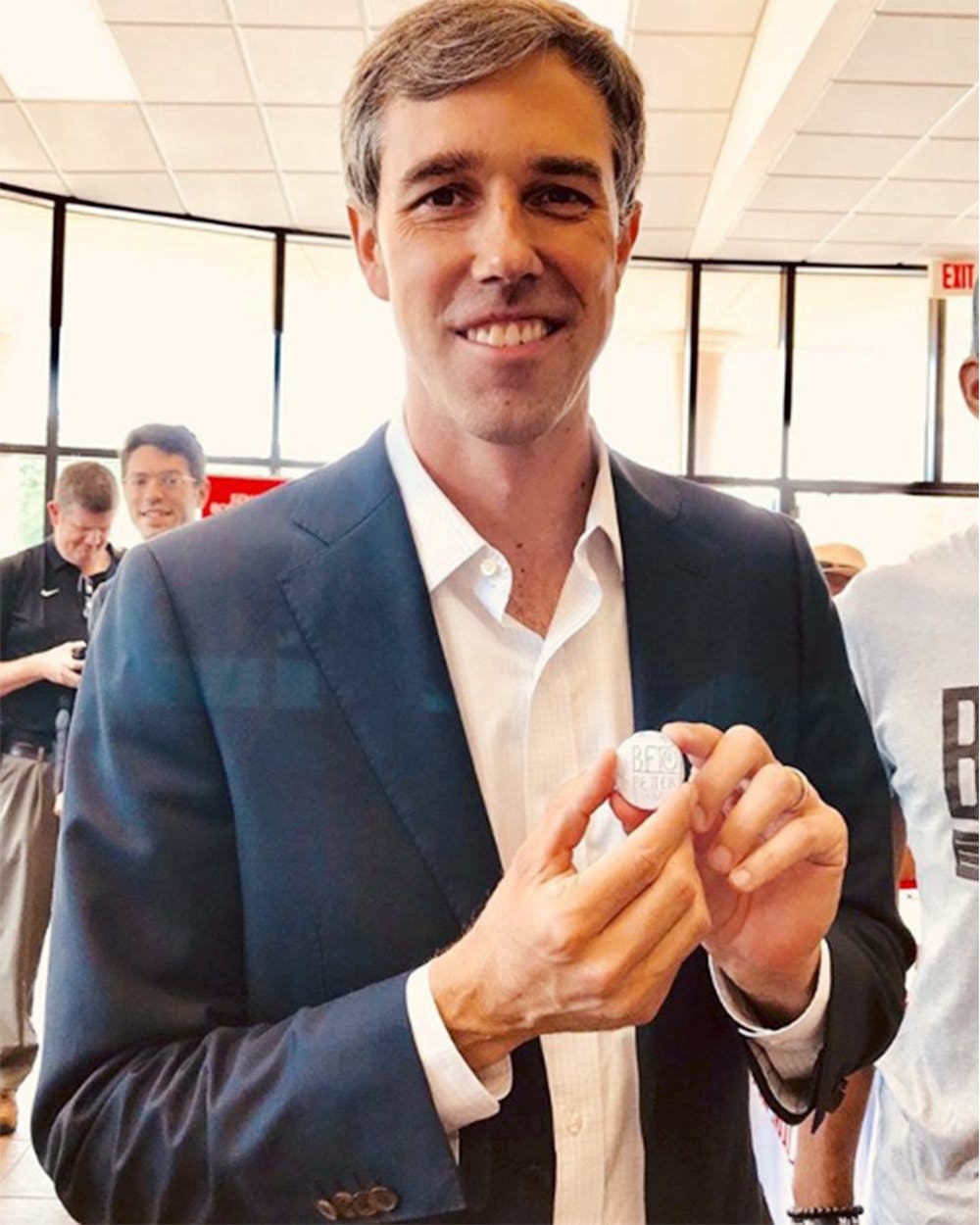 Herman notes that Wall is not the only artist who has been inspired by O’Rourke’s campaign. “The campaign has become very much about the merchandise,” she says. Its black-and-white color scheme is easy to imitate, so people have taken the premise and begun designing shirts and stickers of their own. “I’ve probably seen seventy t-shirt designs,” she says. “I wouldn’t say Beto seems creative, but he is. Maybe that creative streak in him is coming out in everybody else.”

Still, the coins are unique—literally, the surface imperfections and tiny variances in their painting are a considerable part of their beauty, when examined up close. “It’s not just another sticker, you know?” Herman says. And their humble humanist message dovetails with the positivity, energy, and one-on-one connection generated by the campaign. O’Rourke and his staff, admirers say, have become known for responding to email and otherwise making the myrid small interactions that have led to the groundswell of support for the candidate. It’s a simple but cumulatively powerful approach very much like Wall’s coin project, which also offers street-level connection to anyone who is interested. If Texas will decide Beto is Better in November, remains to be seen.  “

Houston Designer Wears Her Support for Beto with a Sleeveless Dress