I can’t help it. I complain about everything. And I was more than primed to whine, bitch, and kvetch about the Super Bowl invading my hometown of Houston.

All those befuddled tourists and motorcades of dignitaries clogging up the roads: Get off my highways!

And really? The freaking Patriots? Again? Playing the Falcons, among the least storied, most forgettable franchises in football history? Fie on this so-called “Big Game.”

All this hoopla, for what? What good would the Super Bowl do for anyone other than some fat-cat CEOs and celebs jetting in on their Gulfstreams to see and be seen, and the wheeler-dealers in the Greater Houston Convention and Visitors Bureau, so keen to show off our glittering new $357 million Marriott Marquis (with famous Texas-shaped lazy river), Discovery Green, and the overhauled $1.5 billion convention district. After all, that was what I had read Super Bowls were really about, man: a C-suite field of schemes.

How would any of that be of much good to the average Joes and Janes who live and own small businesses downtown. The whole thing seemed to dwell in the stratosphere, 30,000 feet above literal Main Street.

Plus, Super Bowl LI was happening in the wake of contentious protests of the new president, his administration, and his flurry of executive orders issued within his first days in office. On the Sunday before the game, I went downtown to pick up my media credentials and ran into a huge political protest ringing the convention center on two sides, chanters screaming “No Trump! No KKK! No fascist USA!” and “This is what democracy looks like!” 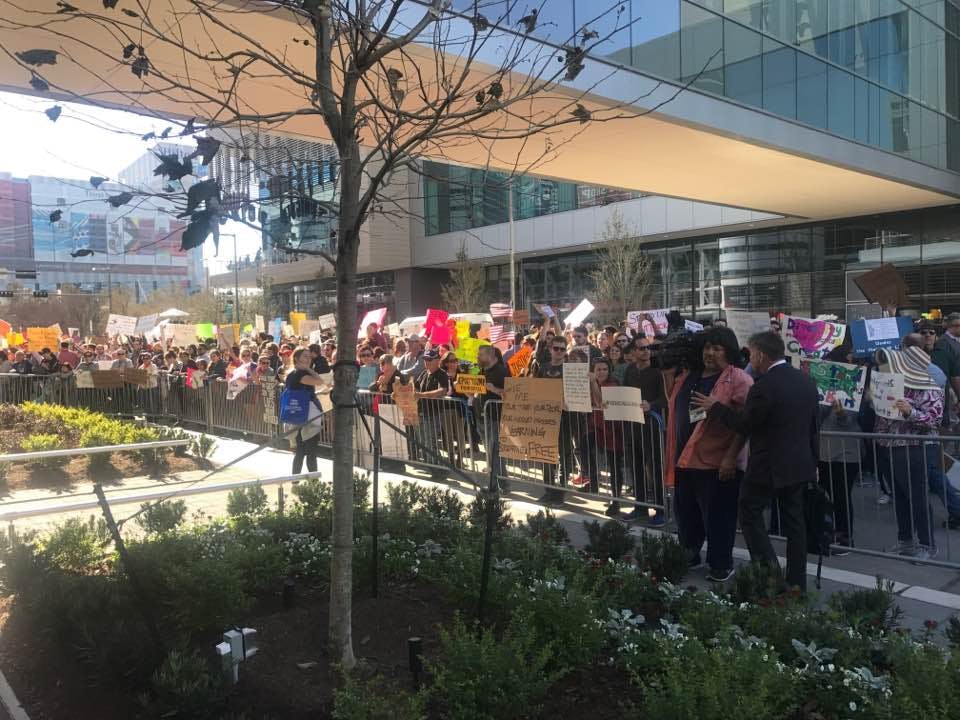 Seeing these protests, the journalist in me felt conflicted on what story I needed to cover in the moment. Should I be covering the protests instead of a silly football game? Was this the time to ignore the Roman gladiator-level spectacle of behemoth athletes knocking CTE into one another’s domes? Or was this a time to dig deep into Serious Issues?

By kickoff on Super Bowl Sunday, all of my noble intentions and high-mindedness had gone as astray as the average Brock Osweiler deep out. (Plus, my editor assured me, we would cover that too.) I’d even ditched my kinda-sorta rooting interest in the Falcons in favor of a Patriots bias that came on so strongly and unexpectedly it shocked me.

My mental metamorphosis really started in the week leading up to the game, during the hazy onslaught of media eents. At one of the Patriots’ sessions, I sat in on a Q&A with defensive back and six-time team captain Devin McCourty. His backstory is inspiring—as a high-schooler in New Jersey, he received exactly one scholarship offer, and that to mediocre-at-best Rutgers. McCourty and his twin brother, Jason, both worked their way from there to the NFL, and Devin was a first-round pick for the Patriots. He made a captain in only his second year in the league.

McCourty talked at length about the strictly meritocratic culture Bill Belichick has instilled in Foxboro:

Only your performance matters. [Belichick] always talks about how leadership is just attitude and performance. That’s what he tells guys. If you want to be a leader, if you want to be a guy that has a role on the team, go out there and earn it. It doesn’t matter where you came in. You look at our team, we have guys from all over the place—undrafted, first-rounders—and I think guys take that in stride and say, ‘Let me work my butt off and see where I end up.’ That’s why you see throughout a whole season a bunch of names come in and out.

. . . It’s all about who goes out there and earns their spot and plays well.

Sure, everybody says their team does that, but if you think about it, only the Patriots have pulled it off for a decade and change at a time. Think of the stars of this Super Bowl: Tom Brady, sixth-round pick who runs a 5.3 forty-yard dash; Danny Amendola, unsigned free agent who’d been cut by two teams and allowed to walk by a third; James White, three-star high-schooler turned fourth-round draft pick; and Martellus Bennett, who had once been regarded as a injury-prone and too much of a character. Belichick snagged him from the Bears (who Bennett had called “a bunch of bitches”) for a fourth-round draft pick the Bears used to draft a guy named Deiondre’ Hall, eight slots ahead of Dak Prescott. (Presumably the Bears felt that standing pat with Jay Cutler, Brian Hoyer, and Matt Barkley would suffice at QB.)

Bennett racked up almost as many TD catches (seven) as Hall had tackles (nine). The Bears went 3-13 and the Patriots won another Super Bowl, and this is just one example of many that have sustained this astounding dynasty since Mary J. Blige’s “Family Affair” was near the top of the pop charts, Enron was still alive (barely), and the Fast and the Furious film dynasty was just beginning to rev its engines.

And it turns out Bennett is less a character than he is just a guy who says what he thinks in a league full of guys who publicly portray themselves as automatons. Check out his rollicking Super Bowl week interview with Texas Monthly’s Matt Mosley and the alternately hilarious and heart-rending ESPN documentary The Brothers Bennett.

So, there it was: an Aggie was converting me, a fourth-generation Longhorn, to the Patriot cause, even though he totally trolled Mack Brown in the Mosley interview. Actually it was a kind of triple-troll. Mosley asked the former blue-chip recruit from Alief to recall how National Signing Day went:

I actually did my [ceremony] on television, on [Fox Sports Southwest], and I remember I was going to go to LSU. Everyone in my family had LSU hats. I had this Cotton Bowl coin from when Texas played LSU because Texas was one of my top picks, too. I flipped a coin and it landed on Texas. I wanted to give that moment of “Ah, he’s going to Texas” and then flip it over and it’s LSU. And then I see this Texas A&M hat, and my heart was just, like, “Texas A&M.” My family was like, “Oh, snaps, no one has Texas A&M stuff.” But at that moment I loved my brother [Michael Bennett] so much, and I couldn’t imagine being apart from him.

That’s dang funny, I don’t care who you are. To expiate the treachery in my heart, I interviewed Malcom Brown, the Pats’s defensive tackle and former Brenham Cub and one of the last players the sputtering Mack Brown regime managed to place in the NFL. Malcolm Brown’s answers were not in the same league as Bennett’s—almost no player’s are—but I did catch him off guard a bit when I asked him his favorite restaurant in Houston.

“Hmm,” he said, smiling. “Aw, man, I’m gonna have to say Whataburger, Whataburger, in general, ‘cause I can’t get that in Massachusetts.”

As for my second point of contention, the corporatism of the event, I’d been hearing grumblings from a few sources downtown that this Super Bowl was falling short of the expectations set by the 2004 game in terms of bars and restaurants along Main Street and on Market Square, the area that had been the epicenter of fun in 2004. I went down there on Friday night and it was dead as Bud Adams’s damned soul. “They’ve herded everyone into that Potemkin Village on Discovery Green and nobody is venturing out,” groused Jim Pirtle, owner of Notsuoh, a venerable Main Street bar that was empty at 8 p.m. on a Friday night on Super Bowl weekend. “CEOs from all over America are coming here to have their pow-wow. This is not about football at all, just the captains of corporate America having a party.” Pirtle went on to say that once Discovery Green opened, it sucked all the air out of the rest of downtown, at least when big events like the Final Four and NBA All-Star Game were in town.

I double- and triple-checked his story. Nearby Market Square was somnolent—much slower than a normal Friday, as locals, fearing a tourist madhouse, stayed away in droves. A bartender at Warren’s Inn—one of downtown’s longest-established bars—told me that Pirtle had been correct, and I could see it with my own eyes. La Carafe, another of downtown’s old bars, was relatively empty. Back in the eighties, when downtown Houston was a post-apocalyptic dystopian hellscape after dark, Carafe and Warren’s had been there, keeping Market Square’s glorious past alive and holding out hope that brighter days would come—and now that they had, they were being denied a seat a the table for the feast. Meanwhile, tens of thousands of people were in the fenced off fan zone at Discovery Green, not spending their money at the places that have long kept downtown Houston alive.

Even as I resented its hogging of energy at the time, I had to admit it was stunning. The billion-dollar reboot of the convention district is a dazzler: new buildings with sleek lines and bold, chromy colors and acres of greenspace now occupy what had been, only fifteen years ago, a vast prairie of parking lots surrounding a horrendously ugly convention center I once characterized thusly: “They say that architecture is frozen music. If you melted the George R. Brown, you’d hear Baby Jane singing ‘The Good Ship Lollipop.'”

Today, the whole area reminded me of London’s Docklands area, an actual world-class visitors’ district that keeps Houston in the running for convention dollars amid stiff regional competition from the likes of New Orleans, Austin, San Antonio, and Dallas-Fort Worth.

And by Saturday night, everybody was sharing the wealth. That night was revved up for everybody downtown. Discovery Green (somewhat controversially) hit capacity early, sending tens of thousands of partiers in search of alternate plans, and no Main Street / Market Square bar owner had anything to complain about on Sunday afternoon, when I asked around. Pirtle had planned to open Notsuoh (it’s also his residence) every day of the week at the uncharacteristically early hour of 1 p.m., but when I went by at about four, it was locked up tight and dark as a dungeon. I’d sent him an email and asked him if things had been better on Saturday, and instead of the tirades he’d been sending me earlier in the week, all he could muster on Sunday morning was a terse “yes.”

The streets were full of joyful, hopeful fans of both the Pats and the Falcons. (It seems Atlanta travels better than Carolina did in 2004; I remember seeing hardly a single Panther fan here. As for the Pats, they both travel well and have lots of bandwagon fans, so it seemed like they had about sixty-forty advantage downtown.)

As I trudged back to my bike to try to furiously pedal back home in time for kickoff, workers were already dismantling some of the makeshift stages downtown. And I made it back to the sofa in time for all but a few minutes of the first quarter of the best Super Bowl, the best halftime show, and the game with perhaps the most interesting commercials of any Super Bowl ever.

We did it, Houston—and Texas. The weather was pretty much perfect all week and the state’s largest city put on a party for the ages. 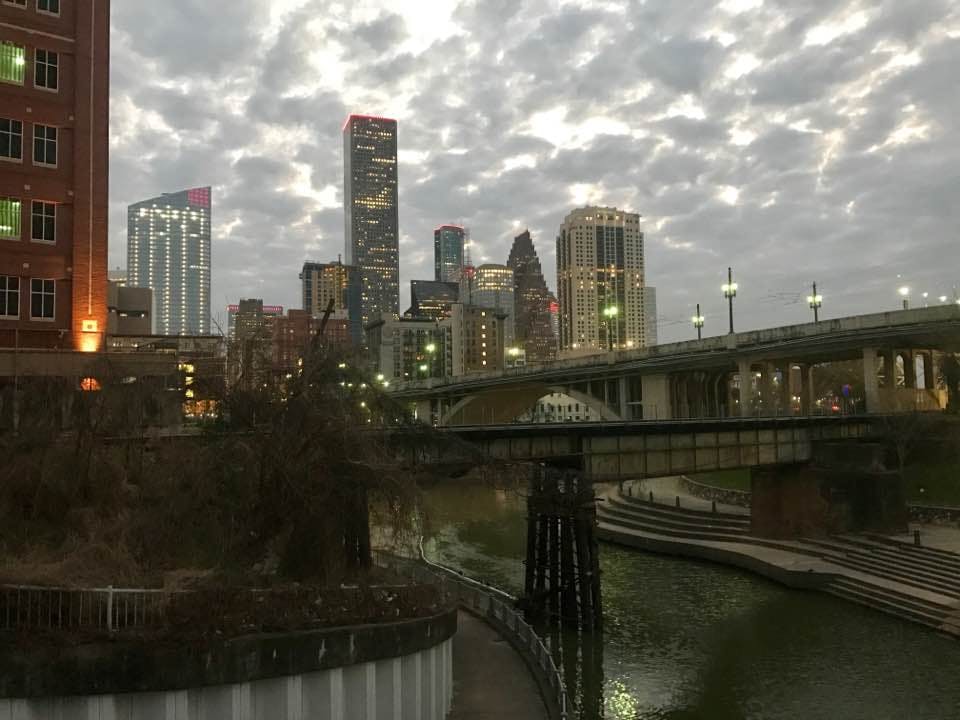