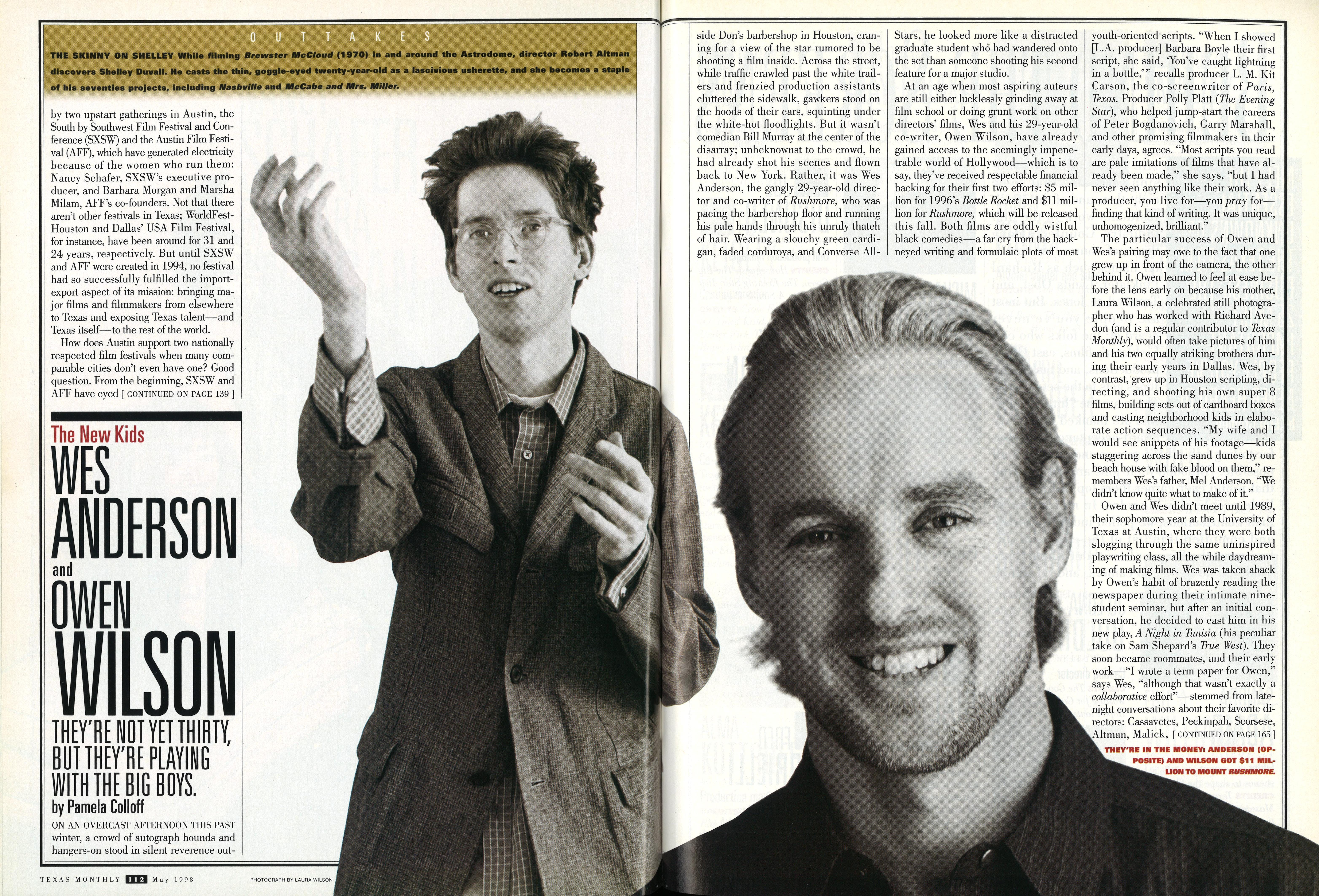 On an overcast afternoon this past winter, a crowd of autograph hounds and hangers-on stood in silent reverence outside Don’s barbershop in Houston, craning for a view of the star rumored to be shooting a film inside. Across the street, while traffic crawled past the white trailers and frenzied production assistants cluttered the sidewalk, gawkers stood on the hoods of their cars, squinting under the white-hot floodlights. But it wasn’t comedian Bill Murray at the center of the disarray; unbeknownst to the crowd, he had already shot his scenes and flown back to New York. Rather, it was Wes Anderson, the gangly 29-year-old director and co-writer of Rushmore, who was pacing the barbershop floor and running his pale hands through his unruly thatch of hair. Wearing a slouchy green cardigan, faded corduroys, and Converse All-Stars, he looked more like a distracted graduate student who had wandered onto the set than someone shooting his second feature for a major studio.

At an age when most aspiring auteurs are still either lucklessly grinding away at film school or doing grunt work on other directors’ films, Wes and his 29-year-old co-writer, Owen Wilson, have already gained access to the seemingly impenetrable world of Hollywood—which is to say, they’ve received respectable financial backing for their first two efforts: $5 million for 1996’s Bottle Rocket and $11 million for Rushmore, which will be released this fall. Both films are oddly wistful black comedies—a far cry from the hackneyed writing and formulaic plots of most youth-oriented scripts. “When I showed [L.A. producer] Barbara Boyle their first script, she said, ‘You’ve caught lightning in a bottle,’” recalls producer L. M. Kit Carson, the co-screenwriter of Paris, Texas. Producer Polly Platt (The Evening Star), who helped jump-start the careers of Peter Bogdanovich, Garry Marshall, and other promising filmmakers in their early days, agrees. “Most scripts you read are pale imitations of films that have already been made,” she says, “but I had never seen anything like their work. As a producer, you live for—you pray for—finding that kind of writing. It was unique, unhomogenized, brilliant.”

The particular success of Owen and Wes’s pairing may owe to the fact that one grew up in front of the camera, the other behind it. Owen learned to feel at ease before the lens early on because his mother, Laura Wilson, a celebrated still photographer who has worked with Richard Avedon (and is a regular contributor to Texas Monthly), would often take pictures of him and his two equally striking brothers during their early years in Dallas. Wes, by contrast, grew up in Houston scripting, directing, and shooting his own super 8 films, building sets out of cardboard boxes and casting neighborhood kids in elaborate action sequences. “My wife and I would see snippets of his footage—kids staggering across the sand dunes by our beach house with fake blood on them,” remembers Wes’s father, Mel Anderson. “We didn’t know quite what to make of it.”

Owen and Wes didn’t meet until 1989, their sophomore year at the University of Texas at Austin, where they were both slogging through the same uninspired playwriting class, all the while daydreaming of making films. Wes was taken aback by Owen’s habit of brazenly reading the newspaper during their intimate nine-student seminar, but after an initial conversation, he decided to cast him in his new play, A Night in Tunisia (his peculiar take on Sam Shepard’s True West). They soon became roommates, and their early work—“I wrote a term paper for Owen,” says Wes, “although that wasn’t exactly a collaborative effort”—stemmed from late-night conversations about their favorite directors: Cassavetes, Peckinpah, Scorsese, Altman, Malick, Huston. But it wasn’t until they began cooking up schemes to end a lengthy dispute with their landlord over his refusal to fix several broken windows—a feud that ultimately drove them to stage a mock break-in and later to move out in the middle of the night, only to be tracked down by a private investigator—that their “grandiosely absurd” vision, in the words of Rushmore producer Barry Mendel, was born.

The result was the feature-length screenplay of Bottle Rocket: the story of two aimless misfits, played by Owen and his brother Luke, who halfheartedly attempt to turn to a life of crime. Wes and Owen adapted that script into an eight-minute short, and what followed was the sort of accidental collision of talent, blind luck, and timing that unestablished filmmakers only dream of. Kit Carson, a family friend of the Wilsons who looked for interesting independent films to pull out of obscurity, watched the short of Bottle Rocket and knew immediately what they had accomplished. He helped Owen and Wes tighten up their screenplay and lengthen their short, eventually sending it on to Hollywood, where it landed on the desk of producer James L. Brooks (Broadcast News, As Good As It Gets). Brooks, too, loved Bottle Rocket and, in a generous leap of faith, offered the roommates a deal: He would not only give them $5 million to turn it into a feature but also give them access to a cinematographer, editors, a crew—all the tools they needed for bringing their ideas to the big screen.

Bottle Rocket generated a loyal following among critics and filmgoers, paving the way for Rushmore, which tells the story of a fifteen-year-old prep school oddball who enlists the help of a cynical tycoon (played by Bill Murray) in winning the affections of a teacher. Owen and Wes’s clever script touched off a bidding war last year that ended in a deal with Disney’s Touchstone Pictures. Meanwhile, the unfinished script for their next film, Black Irish, a tongue-in-cheek western, is already generating interest.

“Sometimes I stop and think how strange this all is,” explains Owen, who can be seen in this summer’s could-be blockbuster Armageddon. “Something that began as a little idea in Austin, that Wes and I just walked around talking about between ourselves, has turned into all this.” He motions toward the sprawl of people outside Don’s barbershop, and he shakes his head ever so slightly in amazement—as if it was dawning on him for the first time that, unlike the short-lived sparkle of a bottle rocket, he and his friend are in no danger of fizzling out anytime soon.