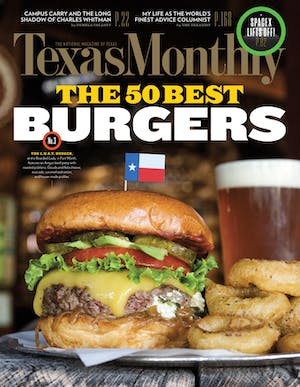 Installed in late May in Sugar Land Town Square, an ersatz plaza in front of the city’s mock-Georgian city hall, the selfie statue (officially titled Selfie) is a life-size bronze representation of two teenage girls posing for a smartphone photo. The subject appeared innocuous to many, but reaction on social media was swift and brutal. “Y’all I saw the selfie statue in Sugar Land with my own eyes; it’s as ridiculous as it sounds,” tweeted one person. “I’m embarrassed for everyone,” wrote another.

Outrage spread to Reddit, where a thread devoted to the statue quickly attracted scores of comments, such as “Sugar Land would” and “It’s way too hot for that scarf.” Houston news outlets picked up the story, followed by the state and national press. The furor even reached across the Atlantic; England’s Daily Mail—always quick to detect any whiff of a scandal—ran a story on the internationally notorious sculpture.

The sculpture was donated by Sugar Land businessman Sandy Levin, the founder of ITI Manufacturing, a “custom manufacturing facilitator” that helps American companies partner with Chinese factories. During one of his frequent trips to China, Levin was struck by a series of public sculptures in Guangzhou depicting ordinary people. Levin commissioned Selfie from a Guangzhou foundry, providing, as guidance, a photo of two Sugar Land girls taking a selfie.

Other pieces from Levin’s collection have been installed over the past few months without complaint, including one of a man strumming a guitar and several alligator sculptures in nearby Oyster Creek Park.

“I never expected the negative reaction,” Levin said. “Selfies are part of America, part of the world these days. It never occurred to me that people would think a sculpture of selfie-taking was anything other than cute.”

On a late afternoon in June, a steady stream of passersby stopped by Selfie to gawk, argue, and—yes—take selfies. “I wish it was something more creative, or maybe something historical,” said Sugar Land resident Sofie Momin. Her friend Zukhruf Ali nodded in agreement. “By being in our town center, it’s representative of the people here. And it’s not really the best thing to represent us.”

Rena Shah, who had seen the statue on Good Morning America and come with her mother to check it out, disagreed. “I think it’s hilarious,” she said, as she snapped photos with her iPhone. “Ten years ago, in high school, I was probably walking around Town Square taking selfies.”

Asked whether the statue reflects well on Sugar Land, she laughed. “I think it reflects Sugar Land very accurately. Even down to the outfit—knee-high boots, cardigan.”

Others tried to find a silver lining to the controversy. “Ehh,” one person commented on Reddit. “At least it’s not a Confederate statue.”