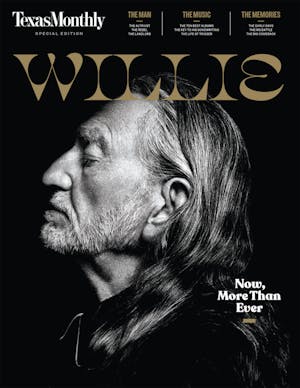 From the Willie Issue Subscribe
This column is part of a special project devoted to Willie Nelson where you'll find new essays about the Red Headed Stranger, our new podcast “One by Willie,” an animated rendition of "On the Road Again," and a ranking of all his albums. Learn more about the special issue, too.

A: Though the Texanist is generally known to be a man of boundless good cheer, even he has occasional spells during which his spirits can flag a bit, and it’s in such moments that deep existential questions tend to pop into his head. Questions such as “What if bluebonnets were umber instead of blue?” and “Why can’t guacamole keep better?” and, in particularly bleak moments, “Will the Dallas Cowboys ever win a Super Bowl again?” Your query is of an even darker stripe than that last one, Mr. Hernandez, but it’s also a thought-provoking proposition.

Since you seem to have a solid familiarity with the redheaded one’s oeuvre—“Pretend I Never Happened” is not one of Willie’s best-known songs—the Texanist does not feel compelled to dive deeply into Willie’s long biography or the particulars of his very interesting curriculum vitae, which includes stints as a tree trimmer, landlord, and door-to-door Bible salesman, in order to provide a response to your question. But even a severely abridged accounting of his accomplishments would be remiss to not include the following highlights: he threw a wrench in the Nashville country music machine by bucking the powers that be, he grew his hair out, tossed away his razor, cavorted with bikers and hippies, recorded albums without any of the Nashville sweetening that label executives had long insisted on, sang about sitting around in his underwear, and in doing so managed to sell millions of records to the shit-kickers, the longhairs, and the country-club set, who rarely found common ground about anything else.

On top of all that, he popularized Lone Star beer and, along with Waylon Jennings, put Luckenbach, Texas, on the map. He cofounded Farm Aid. He helped make marijuana legalization mainstream and biofuels sort of mainstream. And he even assisted in the integration of the lily-white country genre by promoting the burgeoning career of African American crooner Charley Pride, once going so far as to lay a big wet kiss on Pride’s lips on the stage of Dallas’s Longhorn Ballroom at a time when such an act was far out of the norm anywhere, much less on the stage of a Texas honky-tonk. In sum, the Texanist will state without equivocation that Willie Nelson is an American icon and nothing less than an A1 Texan who has set a superb example for the rest of us to follow.

Willie has been around for about half as long as the state of Texas itself. For virtually all of us, he’s always been here, like springtime wildflowers or the sunrise over the Gulf of Mexico. And though he is one of those figures who seem to belong to everyone, the intimacy of his music can make each of us feel as if we share a personal connection with him. Sometimes, when the Texanist is lathering up in the shower, he’ll alter the lyrics to “Me and Paul,” the tune Willie wrote about his friendship with his longtime drummer Paul English, and substitute “the Texanist” for Paul’s name. “We received our education in the cities of the nation, me and the Texanist,” he’ll find himself singing, without even a modicum of embarrassment.

Being equipped with a devotion to Willie is a trait that non-Texans may think Texans are born with, like being prideful or prone to excessive rowdiness or carnivorousness. But love of him is not, in fact, an inborn trait; it is a culturally inculcated attribute, and most of us can recall our introduction to his uniquely wondrous warble. The Texanist’s daddy was a man who liked music as much as the next guy but was not by any means a country music aficionado. There was, though, a period back in the mid-seventies when the eight-track player in his Lincoln Continental seemed to always be occupied by a cartridge that the Texanist is certain was either 1972’s The Words Don’t Fit the Picture or 1976’s Wanted! The Outlaws. The Texanist knows this because at that time those were the only two Willie records that featured the Willie and Waylon composition “Good Hearted Woman.” The Texanist’s dad loved that song, appreciating in particular the oddball relationship between its two main characters, the good-timin’ man and the good-hearted woman. The Texanist loves the song too. For those same reasons, but also because he remembers that his old man got such a kick out of it.

In the years since that introduction, which include a period in high school when the Texanist listened to a whole lot of ZZ Top and a period in his fratty college days when he listened to a whole lot of George Strait and a period after college when he listened to a whole lot of world music, Willie has always been a part of the Texanist’s life. And whether the Texanist was going through a bad breakup (“To All the Girls I’ve Loved Before”) or a happy reconciliation (“Uncloudy Day”) or just needed some fuel for a straight-up party (“Stay All Night (Stay a Little Longer)”), Willie’s music has always been there. Even in his workaday life, the Texanist has counted on Willie to buoy and inspire him. Each morning on his way to the office the Texanist cues up the title track of Willie’s 1968 offering Texas in My Soul and, with reckless abandon, jams out to the jaunty rendition. “It is there I know my place is / I see only smiling faces and so / Partner, the rest of the world’s not worth / A pound of good old Texas dirt / I got to go, I got Texas in my soul.” It’s a better buzz than a fourth cup o’ joe, perhaps especially for a person in the Texanist’s Texcentric line of work.

In an attempt to fulfill his own fatherly duty, the Texanist has endeavored to impart an appreciation of Willie to his own progeny, much as his daddy did for him all those decades ago. This is why, on a balmy evening in the fall of 2012, while on his way from Austin to Padre Island with his nuclear unit, the Texanist, to the great befuddlement of his missus, took a detour for the express purpose of introducing his then-nine-year-old daughter to the joys of a  Willie Nelson concert at the Williest of all concert venues, historic Floore’s Country Store, in Helotes, the quaint little Hill Country hamlet turned San Antonio suburb.

Floore’s was one of Willie’s early Texas proving grounds, and there’s a permanent sign out front that reads “Willie Nelson Every Sat. Nite,” even though it’s been quite a while since Willie appeared there that frequently. And while this particular nite was a Thursday nite, Willie was indeed on the bill, and the Texanist’s wife and daughter, along with a diverse horde of weed-smoking Willie fans, packed the venue’s outdoor area and communed in one of Texas’s great rites of passage. As is the case at most any Willie show, the set list was an assemblage of greatest hits done medley-style. It was an absolutely perfect evening and one that the Texanist will never forget.

Perhaps, many years from now, whenever his daughter hears a Willie song or Willie’s name comes up in a conversation about the one artist who has touched her life more than any other, she will think back and remember that time her dad hoisted her up onto his shoulders so that she could get a better view of Willie banging out the immortal opening chords to “Whiskey River” or singing “On the Road Again” or “Good Hearted Woman.” And, the Texanist likes to think, perhaps she’ll smile at the memory.

Sorry for the digression, Mr. Hernandez, but you’ve stirred up something in the Texanist and he just couldn’t help himself.

It’s a sad fact (one the Texanist doesn’t care to dwell on), but the day will eventually come when Willie won’t be around. Thankfully, the many marks he’s left on the world, and especially on Texas, are indelible. Over more than six decades he has bridged our cultural and temporal divides, melding our provincial past with our increasingly urban and suburban present. He has shown us what a true independent spirit looks like and has embodied the ideal of a stand-up Texan. Plain and simple, a world without him would be a very different and lesser place indeed. Thankfully, like the beautiful music (and clouds of pot smoke) that billowed out into the warm Hill Country nite from Floore’s all those years ago, Willie will waft through the sweet Texas ether for eternity and probably beyond. It’s just the way it is.

What if Willie Nelson had never happened? The Texanist can’t really imagine it.