Mexico’s long influence on Texas is undeniable, and young Latina fashion and style entrepreneurs are now giving their own spins to their binational cultural heritage. Here are a few of the new brands we’ve noticed making waves across the state.

In 2016, as conversations surrounding Latinos and immigration became hot topics during presidential debates, Jen Zeano took it personally. Born in Mexico but raised in Texas, Zeano had recently left a full-time job to launch a new career. As the election ramped up, she designed a graphic T-shirt with a simple message: “Latina Power.” The shirt quickly went viral, and Zeano has since dedicated her time to building a lifestyle brand that empowers Latinas to be confident in themselves. Often printed on bold colors, Zeano’s shirts feature inspiring messages like “Lo Quiero, Lo Puedo, Lo Obtengo” (“I Want It, I Can Do It, I Got It”) or “Not Your Mamacita.” Other shirts broach subjects that often go undiscussed in Hispanic communities, including mental health and reproductive rights.

“We’re highlighting issues that our generation wants to talk about but feels like they can’t. We’re empowering them to express their thoughts and embrace what may be seen as weaknesses as strengths.” – Jen Zeano 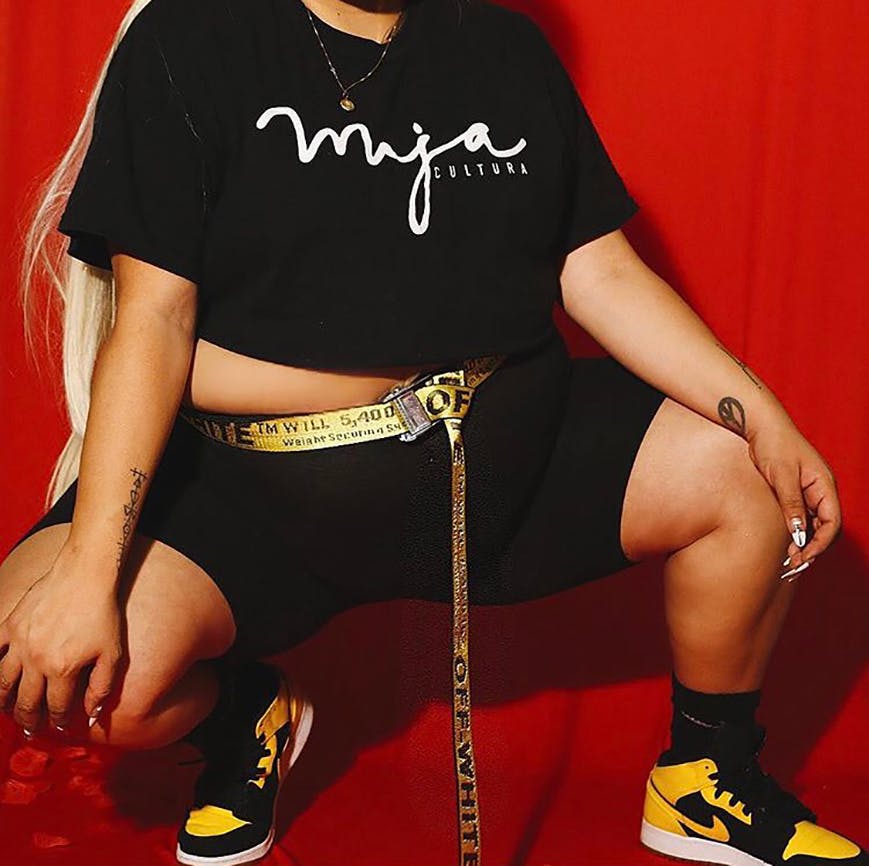 Though they both work full-time jobs, best friends JoAnn Alvarez and Karla Dominguez use Mija Cultura as a creative outlet for their own cultivated street style and shared Tex-Mex roots. Having grown up around the emo music scene, the duo often draws on those influences also when creating their clothes. The result is pieces that are easy to style but use elements like references to Selena, Old English font, and familiar Spanish words like chisme and mija. In addition to graphic T-shirts, Mija Cultura also offers baseball caps, berets, and tote bags.

“We’re emo girls who grew out of it but wanted to create something from it. We’re real women making real ass clothes.” – JoAnn Alvarez

Housed inside a vintage Airstream trailer with light teal accents, La Casa Frida is stocked full of handmade Mexican goods. The boutique is based in San Antonio but has been popping up in cities throughout the state for the past two years. Owners Ruby Hernandez and Gaby Martinez met growing up in Juarez, but several years after moving to San Antonio, they teamed up to bring a piece of Mexico to Texas. La Casa Frida works with a number of Mexican artists to source items like woven palm leaf purses, embroidered earrings, and huipil tops that use traditional elements, but blend into a modern wardrobe.

“Everything you get here is a unique piece of art that represents our heritage.” – Ruby Hernandez

With scents like palo santo and “rose after rain,” Toni Romero’s milk-white candles are a modern take on the traditional velas that adorned her grandmother Dora’s home growing up. In times of struggle or celebration, a lit vela was meant as a prayer to God. Following a family tragedy and then the birth of her second child last year, Romero once again turned to velas for comfort, but she realized there wasn’t a non-toxic alternative to the paraffin candles she grew up with. She took matters into her own hands, spending months teaching herself how to make candles by hand before launching her first three scents in April. While the current collection is clean and simple, her upcoming fall collection will have artwork similar to traditional velas that often feature religious figures like the Virgen de Guadalupe.

“I’ve lived my life one vela at a time. It’s not necessarily about religion, but about tradition and keeping it alive.” – Toni Romero

This article has been updated to correct the spelling of JoAnn Alvarez and Karla Dominguez’s names.

Lynn Wyatt Is Still the Best Little Socialite in Texas