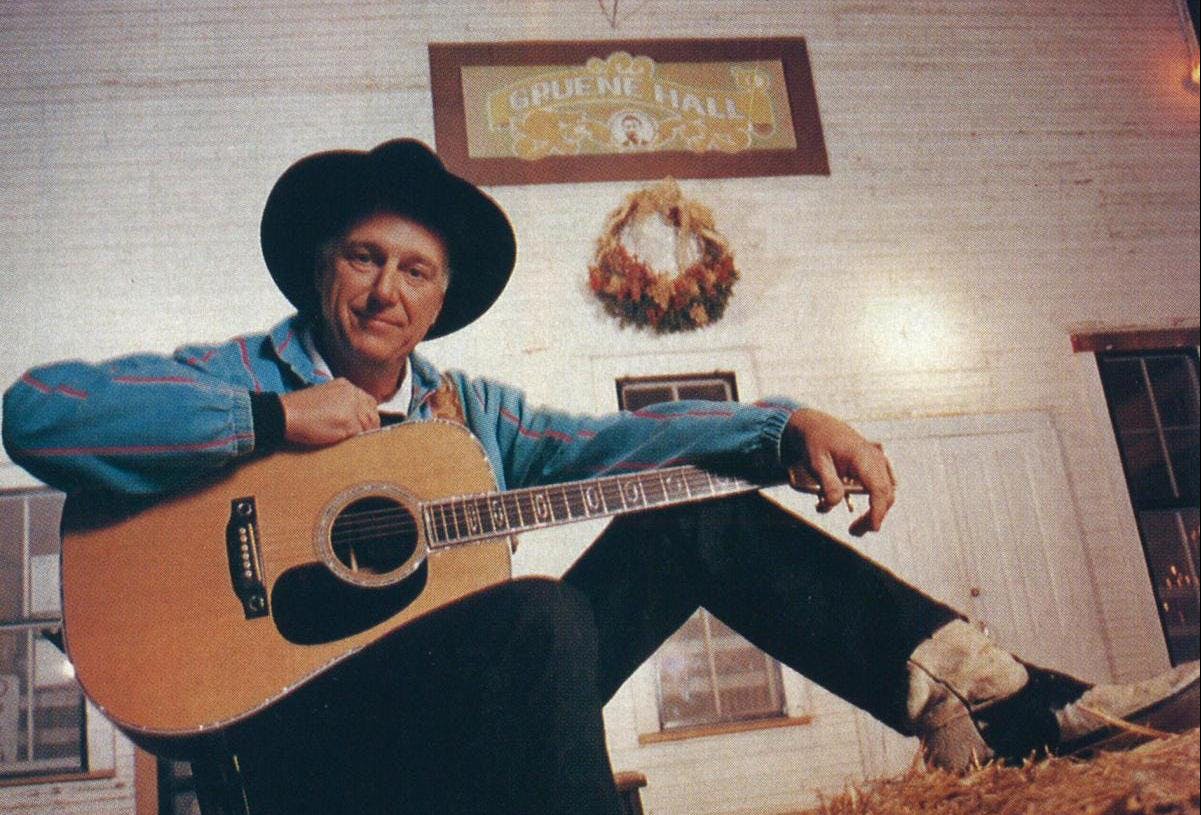 “A rule sheet! Can you believe it?” Pat Molak, the chief entrepre­neurial pooh-bah of tiny Gruene and the co-proprietor of the 1880’s-vintage dance hall there, shrugged wryly as he handed over a bright-green sheet. The handout dictated audience comportment at the mid-December re­cording session for Austin troubadour Jerry Jeff Walker’s new live album, his first in fifteen years. Beer was verboten until the halftime intermission (“J.J. would like to keep the rowdiness down early in the evening,” noted the missive primly). Attendees were enjoined to stay seated during songs and to sing along upon invitation only. It all sounded terribly decorous for a boisterous honky-tonk like Gruene Hall. Not to mention fraught with major league irony: discipline is hardly the style associated with Jerry Jeff, the most flamboyantly dissolute of his mid-seventies Cosmic Cowboy generation. Falling off the stage was one of the milder things Jerry Jeff did back in those booze-and-drug-besotted days; not for nothing was he known as Jacky Jack Snow­drift. Fans loved that old “Scamp” Walker persona for all the obvious reasons: vicarious kicks, permis­sion to misbehave, a there-but-for-the-grace-of-God frisson.

But that was then, and this pierc­ingly cold Hill Country night in Gruene was most assuredly now. The old Jerry Jeff would never have made it inside the new drug-and-alcohol-free Jerry Jeff’s album ses­sion. Control was the evening’s watchword as the hard-core, mostly middle-aged fans—many of whom received their free tickets at an Austin warm-up concert—stood shivering and docile on the side­walk, waiting to be allowed inside. In the nineteenth-century bar, the secretary for Walker’s own Tried and True Music label passed among friends, relations, and the privileged, officiously invoking the no-alcohol statute. As the faithful finally filed into the creaky hardwood-floored hall, uncertainty and a church-social murmur reigned. A fiftyish couple, proud as punch of their autographed Jerry Jeff sweat­shirts, conferred sotto voce. She: “It doesn’t seem like there are enough people to make much noise.” He: “Maybe he doesn’t want a lotta noise.” She, fretful: “I wish I’d practiced my whistle more.”

When Jerry Jeff took the stage, fit and healthy if somewhat more used-looking than his 46 years would warrant, he ex­plained about those college-kid drunks who loused up his preview concert here two weeks back (J.J. berated them, then walked out an hour early) and apologetically revoked tonight’s no-beer rule, perhaps hoping to inject some life into the muted assembly. A mass exodus to the bar ensued. But it would be hours before the awkwardness wore off. The model of modern sobriety and modera­tion, Jerry Jeff seems to be feeling his way toward a new stage persona while his fans figure out how to relate to it. It’s a tricky business, just as it’s a tricky proposition to try to recapture the magic of that first live album recorded at Luckenbach, ¡Viva Terlingua!—a triumph of loose, barely controlled style that was the high point of the whole Austin pro­gressive country movement, as well as a gold-record success Walker has never duplicated.

Small wonder that resonances and odd parallels eddied around the drafty old dance hall like displaced ghosts. Gruene itself summoned up interesting corre­spondences with the dilapidated Hill Country Camelot that was Luckenbach. An all-but-extinct hamlet on the Guada­lupe River at the northern fringe of New Braunfels, Gruene was nursed back to commercial life by Pat Molak and his partner, Mary Jane Nalley. Unlike the late guru of Luckenbach, Hondo Crouch, these folks are comfortable with preser­vationist lingo (they’ve turned Gruene into a national historic district) and refer easily to their domain as a “retail-entertainment complex.” The town may offer the kickback atmospherics that made Luckenbach so beloved, but it’s yuppie-friendly: antiques co-op, theme restaurant, bandbox Victorian bed-and-breakfast, tasteful potter’s studio, win­ery, countrified boutiques. Late-eighties, in short, with access to Interstate 35 and an Austin-to-San-Antonio-corridor loca­tion that fairly screams of the Zeitgeist. Talk about an appropriate venue for the new-and-improved Jerry Jeff—jogger, health-food adherent, golfer, love poet for the safe-sex age—to launch his best new original song, which just happens to be about latter-day preoccupations like the IRS, lawsuits, mortal­ity, and the joys of being a family man (“Lovin’ Makes Livin’ Worthwhile”). Talk about the right spot to legit­imize for posterity the slight, up-tempo pickup-truck ditty Jerry Jeff wrote for the “Don’t Mess With Texas” ad campaign.

While the adoring audi­ence whooped dutifully after each song, their sing-alongs on Steve Fromholz’s “The Man in the Big Hat” and Bill Staines’s “Quiet Faith of Man” proved polite and tentative, and they practically tiptoed to the bar be­tween numbers. It took seven songs before someone let loose with an un­authorized yell, and it wasn’t until after intermission, on second and third run-throughs, that things started to smoke: the band of accomplished Texas musi­cians, all whiny pedal steel and chipper keyboards, assembled for the project; the audience, finally loose enough to stomp and clap and sing along lustily; Jerry Jeff himself, now animated and confident, telling little stories, starting to move around the stage some, doing a jubilant little dance. And the voice—dead on target now, that scratchy, slight­ly nasal baritone, never a technical mar­vel, sailing up high and loud, sliding down low and talky. Toward midnight, Jerry Jeff’s dandified accountant-road manager-golf pro, grave as an altar boy, bore a single longneck to his boss as if it were a holy relic. The crowd, whether seized with nostalgia or saluting J.J.’s triumph over oblivion, went nuts. There were some moments of pure astonish­ment: Jerry Jeff’s resigned, quirky read­ing of Pasadena boy Gary B. White’s “Long, Long Time” transformed it into a whole new song, light-years removed from Linda Ronstadt’s weepy operatics. And the rave-up on Montana songwriter Chris Wall’s sly, hilariously sexist “Trashy Women” was as galvanic as anything Walker has ever done. If Satur­day Night Live doesn’t pick up on this number, there is no justice.

So what now? The album debuts in March. There is no doubt that it contains some good original material, although the reformed reprobate’s insistently sen­timental love ballads to his wife, Susan, seem bound to make some listeners squirm (okay, okay, some folks are gon­na think they’re reeeal romantic, and the guy is clearly getting something out of his system). But the Chris Wall songs—a wonderful weeper called “I Feel Like Hank Williams Tonight” as well as “Trashy Women”—are the kind of strong medicine that begs for airplay. And that does not come easily to an independently produced and distributed album like this one; neither does record-store shelf space. Having been dropped by MCA Records some years back, Jerry Jeff has gone the archetypal Austin independent route and taken control of his own career. The eminently capable Susan Walker manages him. He keeps over­head low by playing mostly solo dates. And the Walkers release cassettes that find their way mainly to Jerry Jeff’s well-established cult. Jerry Jeff may have changed, and the times may have changed, but the music industry has hardly budged. It would be pleasant to think Walker’s Gruene efforts could prove the exception to that depressing rule. Otherwise he’ll be caught in the classic Austin indie bind—preaching to the converted.