There was a time when the only people on campus who dressed in strange clothes and excited unruly crowds to frenzy were called cheerleaders. The fall of 1963 was such a time, and there was no better place to be a cheerleader than the University of Texas. Eleven wins, no losses, UT’s first national championship, total dominance of Roger Staubach’s Navy team in the Cotton Bowl: all were carried out with a ruthless precision that made them seem preordained. Fourteen years later the memories come back crisp and clean: the band blaring out “Texas Fight,” the trumpets swaying in unison, the cheerleaders running onto the field at exactly the right moment, the backflips, the cartwheels, the team emerging from beneath the stands, the deep whumph! of the cannon. The ritual was practiced and perfect, an essential part of what was to follow. And as the game took its inevitable course, the pageant served as a sign that the universe was in its proper order.

Little did those who watched suspect just how fragile the order was. Before the season was over a President would be assassinated. Soon Viet Nam, protests, riots, drugs, and the late sixties would transform the university and the country. The time was not distant when cheerleading and even football would seem an anachronism; not even two more national championships, in 1969 and 1970, could entirely erase that feeling. It would never be the same again.

Even in 1963 there were signs of what lay ahead. While the cheerleaders planned the homecoming bonfire or abandoned themselves to the pleasures of Varsity Carnival and Sigma Chi Derby Day, a few students organized protests against segregated housing and thousands packed Gregory Gym to hear harsh accusations from Ngo Dinh Nhu, the sister-in-law of South Viet Nam’s murdered President Diem. But the real sixties remained far away. It was the twilight of innocence, an era of Bluebonnet Belles and university sweethearts, of deciding whether crew socks were out and Bermuda shorts in; a year when the administration called in the Texas Rangers not to subdue demonstrators but to retrieve the campus mascot from some larcenous Aggies.

It is a bittersweet glory, this business of performing before tens of thousands. Too soon the multitude is gone; too soon the cheering stops. Whatever it was that mattered so much loses its meaning outside the stadium. It is the same for athlete and cheerleader. Whether you won or lost, the game ultimately didn’t make any difference. The season ends, but you keep going. To find out where the 1963 UT cheerleaders have gone, turn the page. 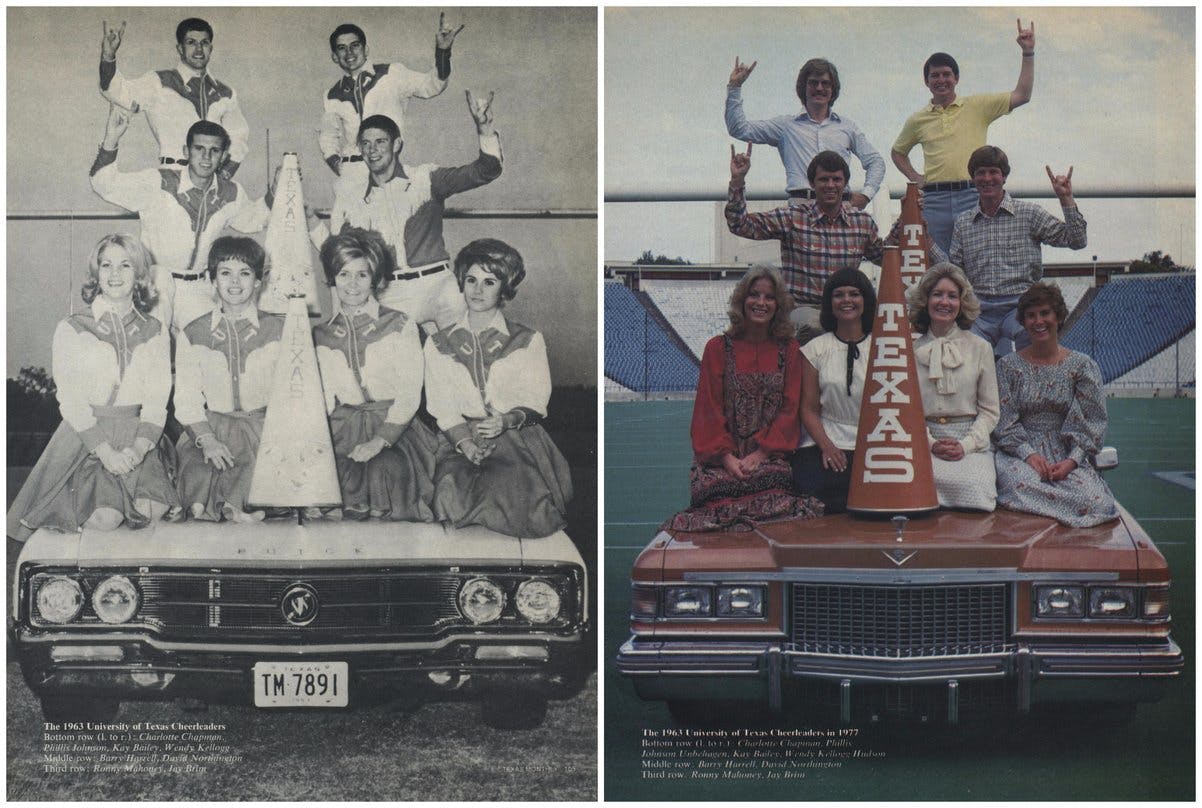 Ronny Mahoney
Then: Sophomore business major from Dallas. Member Sigma Phi Epsilon fraternity. Graduated from the University of Texas with a master’s in business administration.
Now: Spent five years with Texas Instruments’ overseas operations in France and Italy before returning to Dallas as manager of market development for TI.

Charlotte Chapman
Then: Freshman biology ma­jor from Liberty. Member Zeta Tau Alpha sorority.
Now: After working for Sen­ator Lloyd Bentsen as press assistant and as director of scheduling for his presiden­tial campaign, is now an assistant in the Federal En­ergy Administration working on legislative matters that affect energy resources.

Kay Bailey
Then: Junior pre-law major from La Marque. Member Pi Beta Phi sorority. Graduated from the University of Texas School of Law.
Now: Was the political re­porter for KPRC-TV in Houston—the first woman reporter for a television news program in Houston. Repre­sented Houston in the Texas Legislature from 1973 to 1976. Was appointed vice-chairman of the National Transportation Safety Board by President Ford in 1976.

Wendy Kellogg Hudson
Then: Sophomore home-eco­nomics major from Houston. Member Delta Delta Delta sorority.
Now: Lives in Austin and operates the Rare Well Done Meals catering service after six years’ traveling between Austin and New York with spouse Jim Hudson (a de­fensive back for the 1963 Longhorns), who played for the New York Jets.

David Northington
Then: Sophomore from Aus­tin. Head cheerleader, the only member of the squad elected by the student body. Member of the UT gymnas­tics team. Graduated from the University of Texas with a PhD in botany.
Now: Professor of botany at Texas Tech University in Lubbock.

Jay Brim
Then: Freshman pre-law ma­jor from Sulphur Springs. Member Delta Tau Delta fra­ternity. Graduated from the University of Texas School of Law.
Now: In private law practice in Commerce and a special consultant on public school finance to the Texas Com­missioner on Education.