This morning, FIFA announced the winning bid to host the 2026 World Cup. We did it: Along with our neighbors in Canada and Mexico, the United States will host the world’s game in a mere eight years. World Cup games are typically played in multiple cities in the host nation—this year’s competition, hosted by Russia, will take place in eleven different cities around the country—but the 2026 bid listed 23 potential destinations for spectators, spread across all three nations. 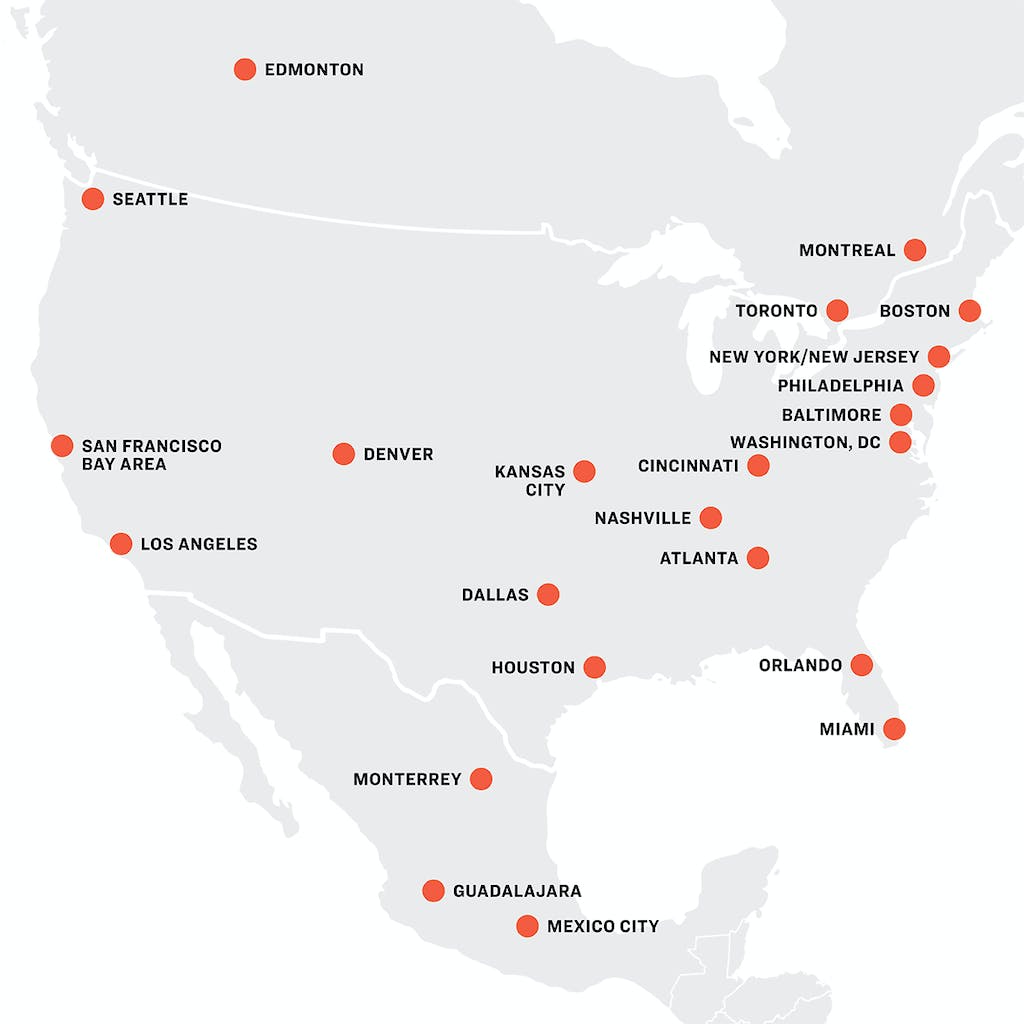 Of those 23 cities, only 16 will actually host matches during the World Cup. Three of those cities are in Mexico: Monterrey, Guadalajara, and Mexico City. Another three—Toronto, Montreal, and Edmonton—are in Canada. If all 6 are selected, that leaves 10 remaining cities for the U.S.

The list of potential U.S. hosts spans the nation. The West Coast contenders are Seattle, Los Angeles, and the San Francisco Bay area. In the Northeast, Boston, New York, Philadelphia, Baltimore, and Washington, D.C., are all in the running, while the South reps Nashville, Atlanta, Orlando, and Miami. Cincinnati and Kansas City represent the Midwest, with Denver as the lone representative of the mountain region. And then, of course, there are Dallas and Houston, the two Texas representatives on the list.

That’s seventeen cities, and seven of them are going to end up disappointed. It’s easy to strike some names from the list—does it make sense to play games in both Baltimore and Washington, D.C., or both New Jersey and Philly? Where would they even play the games in Orlando, whose soccer stadium can only hold 25,000 people? Why host games in both Cincinnati and Kansas City, respectively only the twenty-ninth and thirtieth-largest metropolitan areas in the country? Nashville is the smallest city on the list—wouldn’t it make more sense to host the games in cities where more people could attend?

That’s right—as Texas Monthly, we think World Cup games should be hosted in Dallas and Houston. But it’s not just because of our home-state bias. The two cities are the fourth- and fifth-largest metropolitan areas in the nation, and by the 2026 games, they’ll likely have moved even farther up that list. Their immense size, combined with diverse populations, a proximity to fellow host country Mexico, and facilities that are well equipped to host the games, means it just makes sense to put the World Cup in both Dallas and Houston.

Houston has a clear case: the 2017 Super Bowl, which the city hosted, was a clear triumph of logistics and event planning. They could easily play games in NRG Stadium, which has a retractable roof, to keep sweltering fans from suffering in the summer heat. The city has two airports and countless international nonstop flights. The stadium itself is only eight miles from downtown, which would make the experience of attending a Houston World Cup an easy one for visitors who also want to enjoy the city’s cultural life. If any city on the list has a solid case for why it should host the World Cup, it’s Houston.

Dallas’s case is a little tougher. The last time it hosted a Super Bowl, in 2011, it resulted in multiple lawsuits that only finally were resolved a little over a year ago. (2016’s WrestleMania was similarly troubled.) The regional infrastructure buckled under the weight of the demands (and the weather, as the area was pummeled by a freak ice storm). Besides, World Cup games likely wouldn’t even be played in Dallas proper: They’d probably be at Jerry Jones’s AT&T Stadium, twenty miles away, in Arlington.

Still, those aren’t dealbreakers for Dallas. As long as there’s no unexpected ice storm in summer 2026, it’ll be easier to get people to the stadium for the World Cup than it was for the Olympics. Jones and the Cowboys organization seem to have learned a valuable lesson from the 2011 Super Bowl debacle too: WrestleMania wasn’t without hiccups, but it went more smoothly than the big game, and in April, when they hosted the similarly large-scale NFL Draft, visitors experienced a relatively seamless event. Like Houston, the region boasts two airports, including the hub for American Airlines. Perhaps hosting the actual games in Arlington wouldn’t be such a downside, either—if the event’s organizers are considering awarding matches to both Washington, D.C., and Baltimore, which are only nine miles farther apart than Dallas and Fort Worth are, then they could consider hosting the games in Dallas to be a twofer.

There’s still a long way to go before any of these decisions will be made, and variables will certainly change in the next eight years. But Dallas and Houston are still among the fastest growing regions in the country, with diverse populations, a lot of experience hosting large-scale sporting events, easy access to travel, and a relative proximity to not just Mexico but much of the Midwest and the South. It’d be hard to make that same argument when it comes to Kansas City, Cincinnati, or Orlando; the traffic beats the hell out of Los Angeles; the local populations dwarf that of Nashville; and with 250 miles between them, the two cities are far-enough apart to support hosting separate games. Yes, there are reasons to be skeptical that hosting World Cup matches is actually a boon for a city’s culture or economy, but as people who’d enjoy watching the world’s game played in Texas stadiums, we’ll save those for another time. Since we can’t root for Team U.S.A. in the 2018 Cup, let’s root for Houston and Dallas in 2026 instead.