The Austin-based psychedelic-rock quartet White Denim recently undertook an ambitious project: create an album from start to finish in thirty days. From March 18 to April 17, they wrote, recorded, mixed, and mastered nine full-length songs, which resulted in a new release, World as a Waiting Room.

By way of a WhatsApp group chat, recording separately at their Radio Milk Recording Studio in East Austin, constantly sanitizing their hands, and working remotely at their respective home studios, the band pulled it off while social distancing. The album brims with noisy jams reminiscent of their early years, and involved a slew of past collaborators chipping in—if you look through the album’s credits, you’ll recognize names of past band members like Josh Block and Lucas Anderson, who contributed mixing for tracks like “Go Numb” and “King Prospero,” and lyrics for the kinetic track “Work,” respectively.

While the coronavirus pandemic has by necessity brought on new modes of thinking, being, and creating, it also enabled the band to collaborate and reconnect with past creative partnerships in unexpected ways. With fifteen collaborators and thirty days to pull it off completely remotely, the album stands as an impressive reflection of the array of emotions one might feel during this strange time when life seems to have come to a halt. Following the release of World as a Waiting Room last week, we spoke to front man James Petralli about what went into making it.

Texas Monthly: Congrats on the album release. How does it feel to have it out in the world?

James Petralli: It’s cool. This is the first time that I’ve recorded something and haven’t had to wait months to actually put it out. So it’s pretty interesting to finish it yesterday and have it come out the very next day.

TM: How did the album come about?

JP: Basically, when we decided to do this project, we had just gotten the news of the pandemic and we saw the writing on the wall for our April tour. At the time we didn’t understand the scope until halfway through the project, but we lost basically a quarter of [our] stage work.

We had been in the studio, in production, for five weeks already trying to finish up a different record, what was going to be our next record, and the idea came up. We thought, “Well, we have a lot of time, so we can turn something around really quickly and kind of make up for some of the loss of leaving the tours.” It was just a way for us to keep our crew and our band safe considering touring is our base source of income. This was the best idea we had to recover some of that—being creative and focus on something that wasn’t terrifying.

TM: The album title is pretty fitting for our current moment.

JP: We had an EP album in 2006 that featured a song called “World as a Waiting Room”—we’ve been around for a minute and have a pretty large catalog—and part of the consistent mission statement of this band is to remember where you came from and remember what people liked about you in the first place.

Also, I look up to Gertrude Stein—she messed with tense a lot in her writing and used continuous present tense throughout a lot of her work. When I was in school, that had a really big influence on me, so I try to look at all of the creative work that I do as always being on one plane. So yeah, I pulled from that and used an old title that we thought was really cool and appropriate for this record and the current state of things.

TM: Tell me about the process of putting together a whole record in a month. 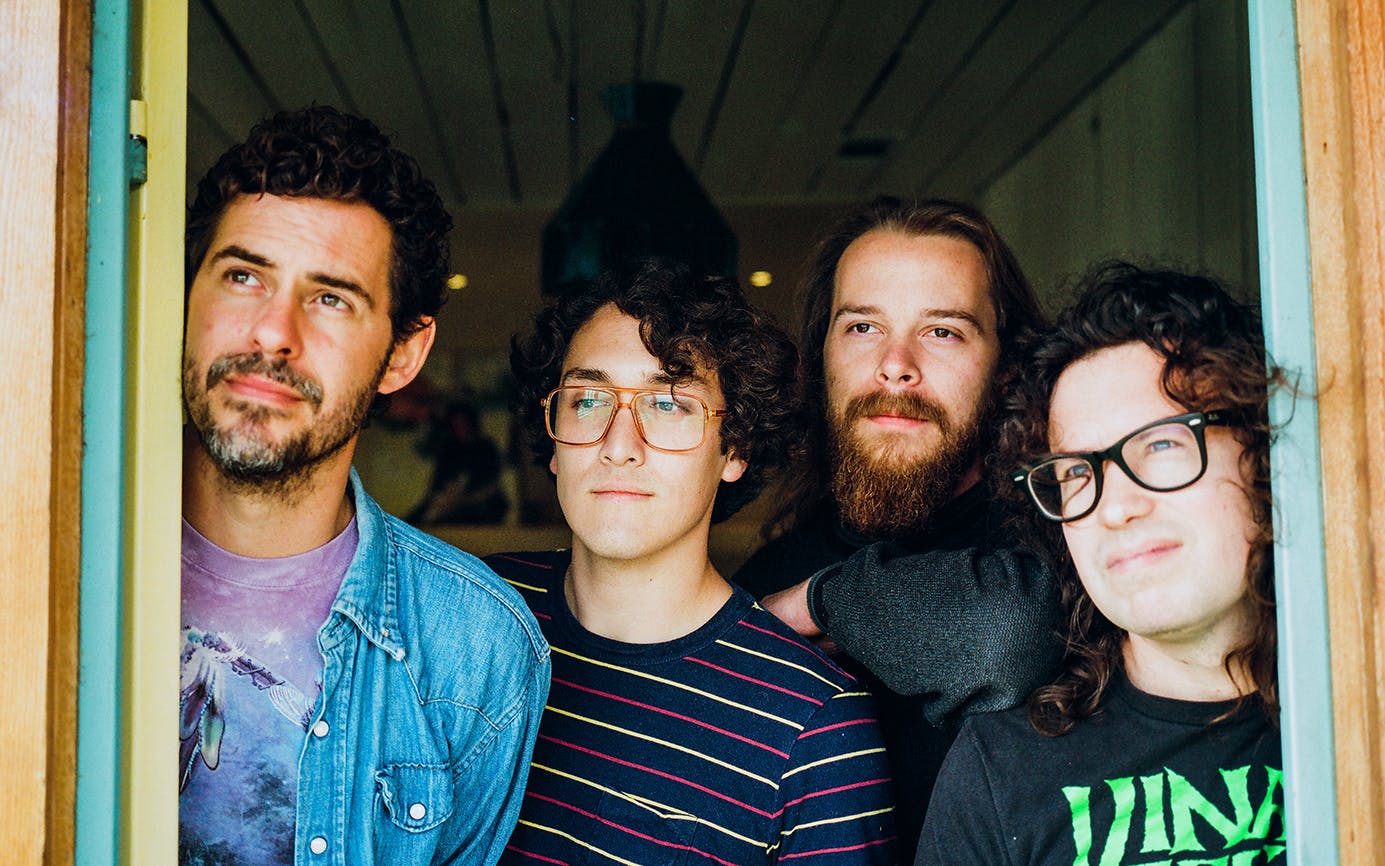 JP: The thirty-day time frame that we had come up with the idea [for] and announced was the Texas projection of when the stay-at-home order would be lifted. And a few weeks into that, we realized it’d be much longer than that and that it wasn’t super relevant anymore, but we committed to it.

So I created a WhatsApp group of fifteen or so collaborators the weekend before the official production started and asked everybody to write a couple of songs or riffs and submit it in the WhatsApp group. Each wrote three or four things, and we picked the most fully developed ideas. The rhythm section started attacking them that first day.

The restrictions got tight, so I basically sent the rhythm section home and luckily, in the first eight days or so, they had got the basic track for everything that’s on the record. And then I finished the record with everybody contributing remotely. It became a little bit lonely there at the end, but I enjoyed the amount of autonomy I had on this one. Collaborating from a distance was cool. You don’t have to see the grimaces of your collaborators’ faces when you do something that maybe doesn’t fully resonate with them, so it’s kind of liberating.

TM: Did anything come out of this that wouldn’t have, maybe, under normal circumstances?

JP: Sure, sure. I think that everybody’s grown up at this point, especially the guys that I work with [who] are a little bit younger than I am—they’ve grown up recording and making music in their own private spaces. You know, everybody’s got a computer and a setup and they can make records in their home. But the way that we’ve always approached making an album is more traditional than that. The first couple of things we did were definitely home studio projects, but as we got more serious on stage and grew, we started to approach production in a more traditional way, like with the band in the room, collaborating and getting live takes to an eight-track machine—basically pretending that it’s the seventies.

But with this record, we couldn’t be together for everybody to really focus on their individual parts and contribute exactly what they wanted to. And it was really different for me, because I heard a lot of things that I may not have heard if I was inside the studio. I haven’t checked in with everybody about their experience with the record, but I hope that they feel like their contribution is really true to what they brought individually.

TM: What were some of the challenges involved in putting this together?

JP: There were obviously difficult challenges with not everybody being able to read body language and react to one another the way that we do on stage. Also, we were communicating primarily through text, so there are some things that are lost in translation. Having such a large group of collaborators became kind of confusing for me to understand where everybody was at with pieces. And some people were more involved than others—which was totally understandable, with pretty uncertain times that we’re in outside of making a record, and making a statement and having a pretty hard deadline.

I’ve really had my head in this record so much that I need to follow up and see where everybody is at on a personal level as well. And it did get a little bit lonely, but everybody tried to support any way that they could. So I’m super thankful for that. 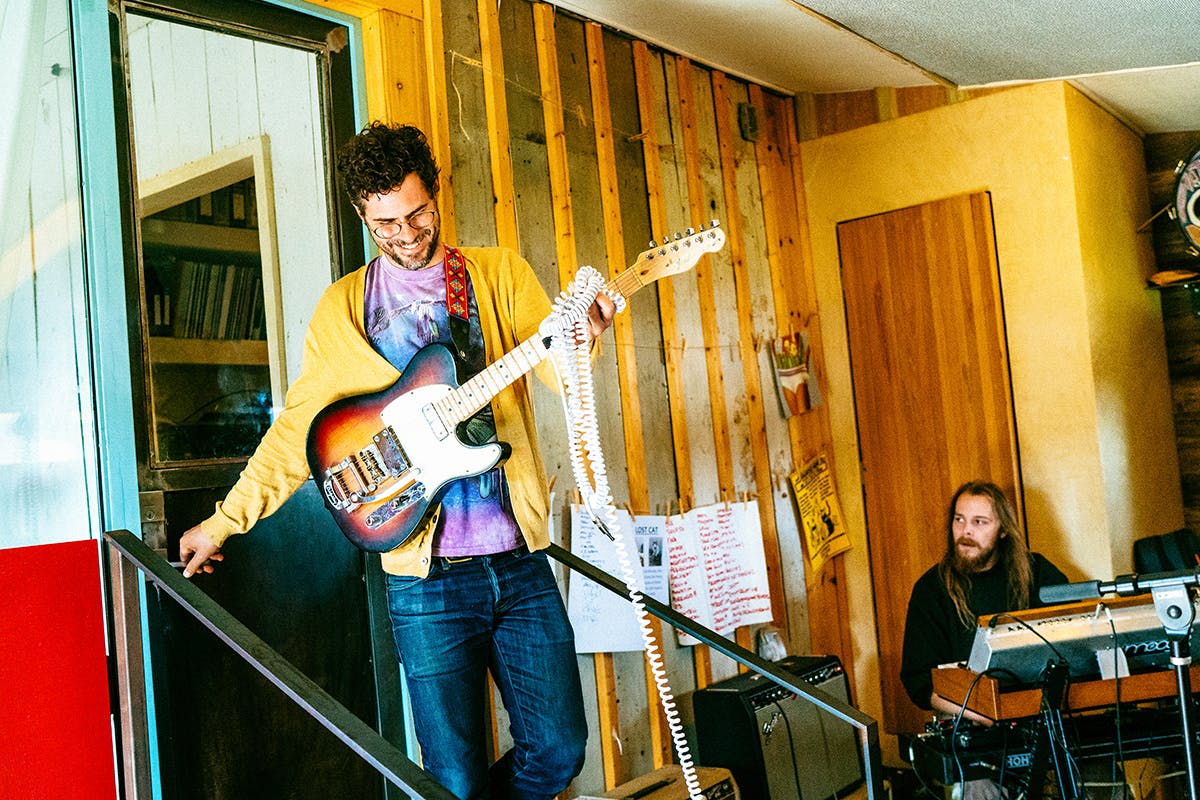 TM: The song “Work” on the album sounds pretty reminiscent of what you’re explaining, with  consuming yourself with a project. Did the hours you put into this influence the song?

JP: Before we had this band, we had another band with Josh Block—he’s no longer with us, but he mixed a couple of songs on this record—he and I and Lucas Anderson had a trio called Parque Touch, which Steve, the bass player of White Denim, eventually joined. I was just the guitar player, so Lucas and I worked together on lyrics.

Anyway, that’s a song that [Lucas] wrote years ago, and when we were accepting submissions for this record, I remembered a song that he had written with another friend, Chris McGaha—I remembered the line, “I want to work until it’s not work,” and I asked him to send me the demo and the lyrics. There was even a lyric that he had written five years ago about beating the curve. I was like, “Man, this is way too appropriate not to do.”

JP: Yeah, about fifteen people were actually getting my daily mixes and updates and opportunities to contribute and give feedback—people in London, Belgium, New York, L.A., an old crew from Fort Worth that I played with since I was just starting.

I think that most everybody has been evaluating what’s most important in their lives—I know that I’ve spoken to my family on a more regular basis than I have since I left home. And I know that this was my effort to reconnect with people, and work on something creative and hopefully heal some relationships through it. Josh Block and I started this band, and years ago, we had a bit of a falling out. He left the group, and this was the first time that we worked on something together in six years. This has been a really great, great opportunity to move forward from some of that stuff.

TM: Do you think you would ever undertake another project like this again?

JP: I don’t know. In a way, I think I’ll take this energy and just continue to try and create and engage with people that I make music with. Like after we get off the phone, I’m going to go to the studio and continue working on things that we didn’t quite get to in that thirty-day period. That “Work” song became like a personal mantra.

I found that having that deadline forced me to use skills that I hadn’t had to use in a long time, like time management, and I was just a more decisive version of myself. It was nice to trust [this instinct] of: “This is good, let’s do it,” put it down, and move on.

A lot of times on a record, especially when you’ve made like fifteen of them and when you own a studio like we do, you can sit on an idea for so long that it becomes less powerful when you work on it. It’s been a long time since I’ve been on a record and felt the urgency there to communicate.