I’ve never eaten at a restaurant more often before a first review than this one. Including opening night, I’ve enjoyed seven meals at 18th & Vine since they opened the doors in early October. It helps that the restaurant is just fifteen minutes from my house, but it also takes a while to get through the menu—or rather menus. Between lunch and dinner, there are forty individual items to choose from, and I’ve eaten nearly every one of them. Sorry, I skipped the salads, but I’ll show you most everything else.

Pitmaster Matt Dallman is in charge of the sandwich-heavy lunch menu. There are a few vegetarian-friendly twists and smoked salmon makes a couple of appearances, but it’s mainly a straight up barbecue menu. The prices might be a little higher ($12 for most sandwiches with a side) and the presentation a little more fancy (real plates, cloth napkins, servers, and a wine list), but this isn’t your average barbecue joint. In fact, it doesn’t feel right to call it anything but a restaurant. The building is new and the interior is immaculate. As a former architect, I like the attention to the design, and as an amateur food photographer, I appreciate all the natural light. It’s a comfortable space, but expect to get a few more stares when eating sliced brisket with your hands. No need to worry about knives and forks for the sandwiches. It’s not that fancy.

I lament the ability to get a simple chopped brisket sandwich, but the Basie sticks with the Kansas City theme. You see, Dallman is a Kansas City-native who missed the barbecue from his home state after moving to Dallas in 2001. He sought to recreate it with his home smoker before starting a catering side gig. The KC-ness of 18th & Vine (named after a famous jazz district in Kansas City) has been emphasized since the project was first announced late last year, so it’s not a surprise to see a sauced-up brisket sandwich with cheese like the famous Z-Man at Joe’s Kansas City BBQ.

The Basie is a fine sandwich on a good bun, but it’s hard to compete with a well-made brisket grilled cheese. How they’ve been able to restrain themselves from putting their incredible burnt ends on a sandwich is beyond me. As it should be at a Kansas City barbecue joint, I think the burnt ends are their best item (as I’ve noted previously), and they’re available in a single $13 portion any time of the day. As for the rest of the sandwiches, I loved the subtle smokiness of the moist salmon, and the tender chicken was great on the buttered bun once I’d taken off half of the pickled onions. The pulled pork is basic but well executed with a slaw that is good only as the supporting cast.

The rest of the barbecue items, and a smoked cauliflower steak are also available all day, in small ($12) or large ($18) portions (nothing is sold by the pound). Thankfully, a two meat combo plate has been added for those who’d like a little variety. Dallman says the goal is that each combo plate should have about 1/2 lb of meat, but most that I’ve gotten would weigh in closer to a pound. The plates may be pricey, but they’re certainly generous.

Besides the brisket sandwich and the burnt ends, the only real homage remaining to Kansas City barbecue are the saucy ribs. I’ve tried them on several occasions with mixed results on doneness and sauce level. The latest version was the best with great tenderness and just enough sweetness to keep from overpowering the smoke. Pulled pork was also good, if a bit dry, but nothing a little of the house made sauce couldn’t fix. There are two versions, the original and the sweet. I like the original, but both are loaded with cumin and celery seed.

The house-made sausage and sliced brisket are Texas barbecue through and through. The sausage features a coarse grind, great smoke and snap on the casing, and just the right amount of heat. I’ve only seen it get better since opening day. The brisket has always been good with a hefty bark and good seasoning. Unlike in Kansas City, they slice it very thick at 18th & Vine, mainly because it is routinely overcooked. That’s always preferable to undercooked and tough, but the thick slices from the fatty end can get mushy with a water-logged texture. A couple slices of lean brisket from my latest lunch were the best yet. As it should be, the common theme is that it all seems to be steadily improving.

All the meats get smoked in an Oyler rotisserie with oak and hickory. Another smoker called The Good One came from Missouri and it handles the fish, veggies, and the burnt ends. It’s filled with lump charcoal that is supplemented with wood for the smoke flavor. 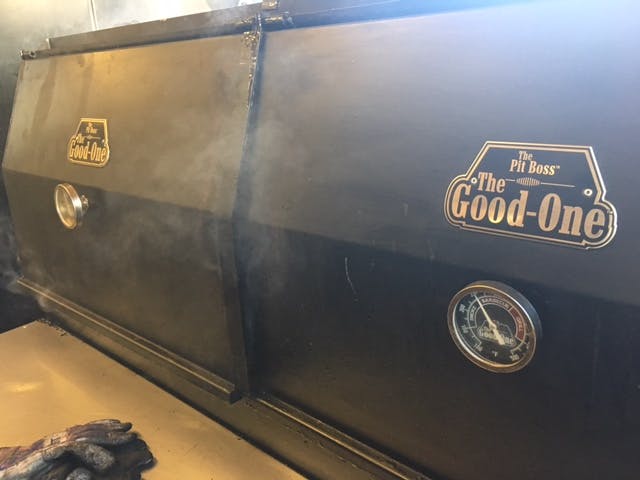 Also available all day are the sides and appetizers. I was taken with the smoked salmon dip and the smo-fried wings. It’s hard to get that pleasing crispness in a chicken wing purely from the smoker, so the dunk in the fryer was one extra step that’s worth it. The $8 fried okra (which began as a side, but was priced out of the category and into the appetizers), is worth every cent. Whole pods are sliced lengthwise and are encased in a crisp batter. This might be the best fried okra I’ve had at a Texas barbecue joint, er, restaurant.

As for the sides, I like the sweet and spicy beans, fries, and the rich greens which weren’t too sweet. The cheese grits and slaw were fine, while the smoked mushrooms were all over the map. Too smoky one night, perfect the next, and so salty they were inedible on the final visit.

APPETIZERS AND SIDES (ALL DAY):

The veggie dip filled with smoked eggplant and carrots is just one of many vegetarian options that bring some barbecue flavor. There’s also a spiced-up, smoked cauliflower steak that eats like a meal, and the aforementioned fried okra. But not the cheesy potato skins, which are adorned with thick lardons of smoky bacon.

Dallman handles the barbecue, but it’s acclaimed chef Scott Gottlich who runs the kitchen. The dinner menu is also his domain, with five composed entrees, plus a special of his choosing every night. There are suggested wine and beer pairings for each, but be sure to check the prices on the separate wine list. My glass of Saldo, the suggested pairing for the steak, was $16 per glass.

Again, the smoked salmon shined at dinner. Along with velvety whipped carrots, a bright carrot pesto, and field peas, it was the only dish I couldn’t stop eating. I licked the plate clean. The other seafood dish, the grouper, was also a hit, although the vegetables underneath were over-salted. A brisket stroganoff (the cheapest dinner entree at $21) was soothing with a rich sauce and al dente pasta.

The most expensive item on the menu was a rather basic strip steak ($39). Served with rapini and a pile of skin-on mashed potatoes, it was a plate-full, but it seemed like a gimme dish there only to please a less adventurous demographic. Gottlich checked on our table near the end of dinner and hinted that he may be working on a replacement for it. If so, diners should be fine with the other hunk-of-meat option: a Berkshire pork chop grilled flawlessly and served with sweet potatoes. A block of pork belly served alongside was a head scratcher. One side was nicely seasoned and seared while the other was dried out and chewy. Cooking all the moisture out of a chunk of fatty pork belly takes a special kind of mistake.

No matter the issues during dinner, the desserts will have you leaving with a smile. The fig crostata will start fights if sharing was the plan, and the fried apple pies were the sort of comfort food that makes a perfect pairing with barbecue.

A common complaint that I’ve heard about 18th & Vine is from people who don’t think barbecue belongs in fancy surroundings at a place that takes reservations. And while that’s certainly what you’ll get, you’ll also get good barbecue. It comes at a higher price point (a more legitimate gripe for the barbecue purists), but it also comes without a line, and it’s a barbecue restaurant where you can take the picky in-laws who value reservations, a full bar, and a steak. And it’s also a place you can pop in at lunch for a plate of fantastic burnt ends and a beer, and it’s hard for me to feel threatened by that just because I have a server and a nice napkin.

Of the many meals I had here, there wasn’t one that I didn’t enjoy. It’s a place that keeps you wanting to come back. Saying that it fills some sort of void for higher-end barbecue in Dallas would be giving short shrift to Smoke that’s been doing just that since 2009, but there does seem to be a greater emphasis on straight-up barbecue here. In fact, the best comparison would be to Fiorella’s Jack Stack Barbecue right in Kansas City. They serve solid barbecue in upscale surroundings. The comparison stops with the superior sliced brisket and the creative dinner entrees at 18th & Vine. In fact, it would probably be the best barbecue joint in Kansas City if Dallman had never moved to Texas. For all of us in Dallas, we should happy that he did.