Jason Hall may be the owner of 3 Stacks, but Trace Arnold is the personality. You may have seen Trace manning the Ultimate Smoker & Grill during one of their cross-country road trips. The rig is essentially a traveling billboard for hire that also happens to be able to cook 2,000 pounds of meat. You may also be familiar with Trace and his very large smoker if you were in West, Texas just after the fertilizer planet explosion. The Ultimate Smoker and Grill became a meat commissary for relief workers and stranded residents in the days immediately following the tragedy. Trace is equal parts showman and philanthropist.

Known as “The Rib Whisperer”, I guess you’d have to be a rib to hear him whisper. He has a wide smile, a big cowboy hat, and a booming voice. When he’s not on the road with his very large cooking rig, he welcomes customers who approach the meat counter at the brand new 3 Stacks Smoke & Tap House in Frisco. The site bumps up against the northern most edge of Dallas’s suburban sprawl, and the amenities here will certainly suit the suburban crowd. A bevy of well-made side items, a full bar, a craft beer list, and even vegetable skewers on the menu are just a few of the clues that this isn’t Lockhart. Despite all that, they still smoke some pretty good meat. 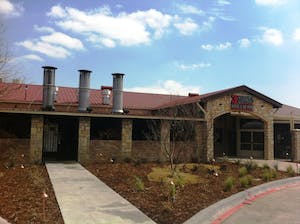 From the parking lot you’ll notice the three smoke stacks rising above the roof (get it? 3 Stacks), and they’re connected to the three rotisserie smokers inside. A gas-fired Southern Pride is used for smoking the baby back pork ribs over pecan. The others are all wood-fired Oylers. One is for smoking the chicken, turkey and sausage with mesquite; the other is dedicated to briskets and beef ribs with a mix of mesquite and pecan. They are prominently displayed along the line to the meat carving counter where the barbecue is cut to order. Trace Arnold has been surveying the slicers or slicing himself on two of three visits that I’ve made. During one visit he showed a greenhorn how to slice brisket against the grain to get a good, tender slice. When he’s not cutting, he’s making sure you have some of his favorite ribs on your tray.

Once the meat has been sliced and weighed, the next stop is the sides station. The amount of choices can be overwhelming, but focus on the crispy, buttery green beans, the super creamy mac & cheese (they’ll ladle an extra scoop of cheese sauce on if you’d like), and the potato salad that Trace is especially proud of. I didn’t try the desserts, but the sweet potato casserole was so loaded with sugar I should have asked for a scoop of ice cream to go with it.

A server took our drink orders once we found a table, and they were back with tall beers before we had liberated the smoked meats from their individual foil packets. The black crust and rosy meat of the beef short rib beckoned. This meat had the best smokiness of the bunch and was the most consistently moist and pull-apart tender cut over the three visits. Slices of fatty brisket had the same promising look. While they were well cooked and plenty tender, the meat was missing something– maybe a bit more smoke or even a little salt, but it fell short of the beef ribs. Brisket burnt ends also take a spot on the menu. At $2 more per pound than the sliced brisket I had to wonder what additional steps they were taking to make the burnt ends. When I ordered them at the meat counter they simply took some fatty ends cuts that they’d trimmed from an earlier briskets and started cutting it into chunks. I guess it’s brilliant if you think about it. They remove the fatty part that a finicky clientele would complain about, and use what would otherwise be scraps to help satisfy the cravings of barbecue die-hards. Why they elevate the cost is beyond me, but the flavors were more intense and satisfying on the burnt ends, and the fat was admirably rendered. The sliced turkey and the smoked sausage were both boring without being off-putting. 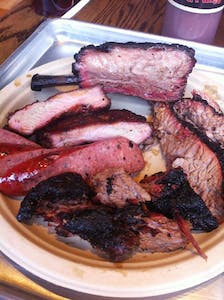 Finally, I had to try those ribs. Baby backs are the only option, but you can get them glazed or dry. Even the dry version has been glazed while still on the smoker, so you’ll get plenty of sweetness with either. The flavors were what you’d expect from a competition style rib. There was a little heat, plenty of sweetness and very little smoke. The firm yet yielding texture was exemplary, but it would be a nice option to get a gnarly salt and pepper spare rib to counterpoint the overt sweetness of the baby backs. The other pork option is pulled pork shoulder. It has plenty of smoky bark to go with the juicy strands of meat. When they offer to toss it with their vinegar sauce, stand your ground and don’t let them ruin it. This pork is better on its own.

There isn’t much at 3 Stacks to complain about unless you’re a barbecue purist who can’t be bothered with big screen televisions and silverware. I like to be able to get a good beer and a few thoughtfully made side items with my barbecue–as long as the meat doesn’t suffer. Being caught with a vegetable skewer might be my breaking point.