When Charlie Geren opened Railhead Smokehouse in Fort Worth, he had already failed at his previous attempt at the restaurant business. Geren said he had just “lost his ass” in a “steak and beer joint” in north Fort Worth, but decided to partner with a pitmaster friend, Harry Pilcher, to take over an empty beer barn. Thirty years later, Railhead is still a Fort Worth staple, and the spot where Geren gets lunch every day when he’s in Fort Worth.

In addition to his work in the barbecue business, Geren is also a Texas state representative, so he spends some time in Austin too. We spoke over the phone yesterday as he cruised to reelection by a wide margin in District 99, but we didn’t talk politics. As for the thirty-year anniversary of Railhead, he said, “I’m just glad I’ve lived long enough to see it.”

He and Pilcher didn’t have any hopes it would last this long when they took over a nameless barbecue joint in a concrete block building that now houses the Eskimo Hut daiquiri stand on West Vickery. They ran the beer barn side of the business while they did some work on the pits and renovated the dining room that seated about forty people. “I’ll never forget that first day because the only customers were my dad and my uncle,” Geren told me.

Geren remembers that “it was six or seven months before we got enough business to keep the doors open. It was sucking money pretty good.” Things finally turned around, and they stayed in the old beer barn for nine years, weathering one too many robberies, according to Geren. “One morning at 5:00 some guys came in and made [Pilcher] open the safe, then they put him in a closet and shot through the door.”Geren recalls. “Fortunately, they missed him, but we started looking that day to move to a better neighborhood.”

A new building went up on Montgomery Street in 1995, and while they lost the beer barn, the big, frosty, goblets of cheap beer is still a big draw. Geren joked, “When we first opened, we had that size and the smaller size, but there wasn’t much demand for the smaller size.” A hefty Coors Light is just $2.75 today, and many regulars sometimes skip the barbecue in favor of happy hour. Fort Worth native Bud Kennedy, a food and political writer for the Fort Worth Star-Telegram, said Geren used to joke with him that the reason Railhead closed at 9 p.m. was so customers could hit Angelo’s, the cross-town barbecue rival, for one last beer (with a $3.50 price tag) before its 10 p.m. closing time, the theory being that wives would blame Angelo’s for the tardy husbands. 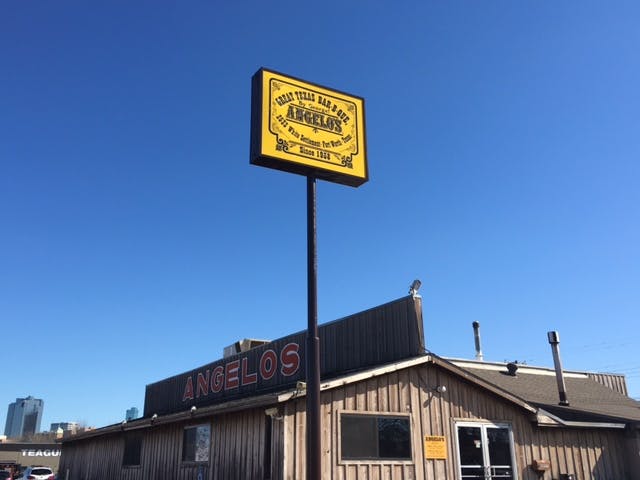 Angelo’s (1958) has a couple decades of history on Railhead, but Kennedy says both barbecue joints have had an incredible effect on the culture of Fort Worth. He says the barbecue rivalry generally boils down to “Angelo’s brisket and Railhead ribs. That’s the popular wisdom in Fort Worth,” but before Railhead came along, it was Sammie’s Bar-B-Q (1946) on Belknap that rivaled Angelo’s. After visits to all three a few months back, I can say that Sammie’s isn’t really in the running, and Kennedy’s assessment of Railhead’s rib superiority is spot on. As for brisket, both versions are better suited for a bun than a platter.

Geren said he’s staying away from carbs, so his lunch yesterday was a smoked chicken breast with jalapeños and mustard, but no barbecue sauce. “I like our barbecue sauce, but I don’t put sauce on my meat. If you have to put sauce on it, why are you eating it?” The yellow mustard seems to be a condiment specific to Fort Worth barbecue. A sandwich “all the way” at Railhead means dill pickles, diced onions, yellow mustard, and barbecue sauce (at Angelo’s, they call it “Texas style”), which works great on their smoked salami, another Fort Worth barbecue signature. I liked the garlicky version at Angelo’s better, but the Railhead thick-sliced bologna is a great sandwich to fill up on, especially with a side of onion rings. 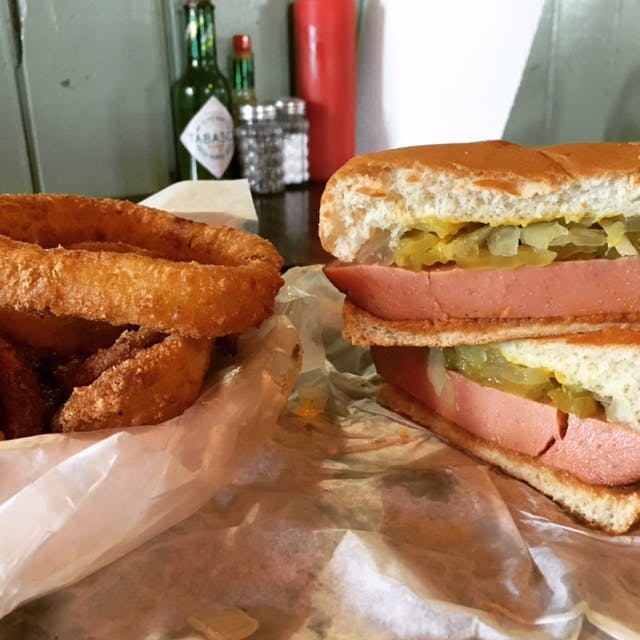 Platters at the two restaurants are almost identical. Both come with solid versions of beans, slaw, and potato salad, with onions and a pickle. Those similarities probably have something to do with the fact that Geren’s pitmaster and partner, Pilcher, honed his craft at Angelo’s for seventeen years before his Railhead days. Kennedy remembers Pilcher’s move as controversial, but Geren said he didn’t exactly steal him away from the competition. Pilcher was a handy man on the Four Sixes Ranch in the Texas Panhandle when Geren convinced him to come back to town and go back into the barbecue business. Sadly, Pilcher passed away in 2001. 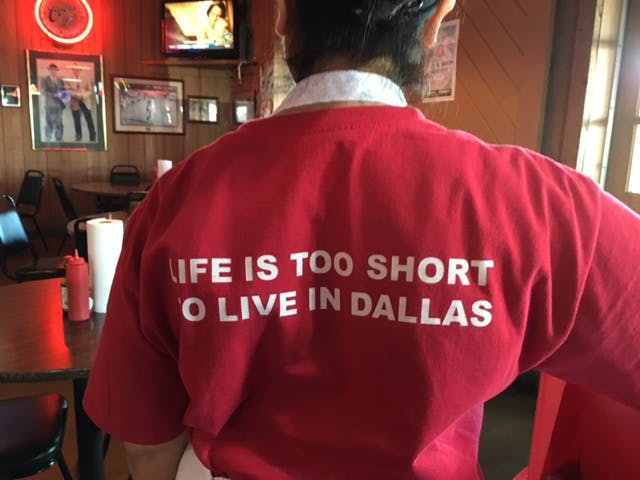 “Life’s too short to live in Dallas,” is the motto at Railhead. It’s on the walls and the staff shirts, and makes this Dallasite squirm a bit. Kennedy admits that when he was growing up, “I never knew anything about Sonny Bryan’s until I read about it in Texas Monthly,” despite its massive popularity less than an hour away. On the “life’s too short” subject,  I’ll hold my tongue as long as the beer stays this cheap, but that’s just one of the reasons to visit this Fort Worth institution for some Cowtown-style barbecue. And while you’re at it, you might as well head over to Angelo’s for a hickory-smoked comparison.