Barbecue joints aren’t simply born. It takes time to develop into one. A barbecue joint is a worn-in stool at a counter smoothed over by time. It’s a soot-stained ceiling, a broken-in barbecue pit, a menu with prices scratched out, and a bigger smile when you use cash. A barbecue joint evokes emotion and jumpstarts memories. It feeds a community—and the family that runs it. When a barbecue joint dies, we lose more than another option for lunch; we lose part of our fabric, part of our collective history. A place where stories might have been made or shared is now reduced to a story told by someone who can only count themselves as a past customer. That’s why a true barbecue joint is more than a restaurant that serves barbecue; it is an establishment that should be cherished.

I’ve been traveling outside of Texas lately, and, of course, searching for barbecue along the way. Call me sentimental, but most of my targets were the old barbecue joints. I hit a few newer places with multi-page menus and large bathrooms, but I wanted to take in the joints that might not be around much longer. It made me realize that I often do just the opposite in Texas. With so many new restaurants opening in my “beat,” I find myself chasing other critics and barbecue fans to the next barbecue hotspot. If I skipped the places, I’d be derelict in my duties, but finding an older, unsung barbecue joint to crow about is always more fulfilling for me professionally.

I’d like to make clear what I consider a true “barbecue joint,” because I usually use the term pretty broadly. A true joint is independently owned. It’s not part of a chain, and it doesn’t have table service. Ideally, at a joint you’ll see your meat cut in front of you, and the smoker out back won’t be difficult to locate. It’s most likely a free-standing building (this requirement gives rural areas a built-in advantage of providing the right conditions for a joint). All of this means that, as much I love some newer barbecue restaurants that have opened in strip centers in big cities, it’s hard to classify them as a true barbecue joint. 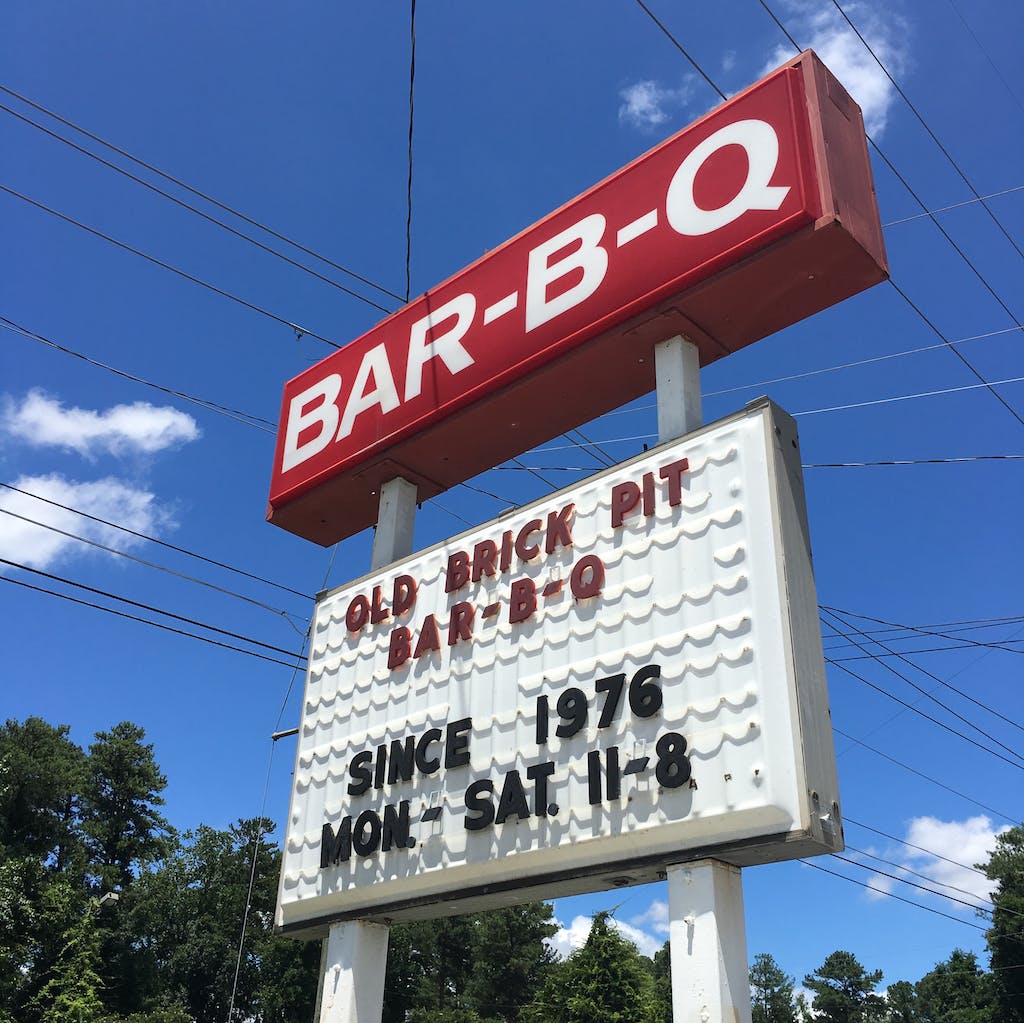 As I said, I’ve been visiting as many joints as possible during my travels outside of Texas. While in Atlanta recently, I met up with food blogger Grant Goggans and photographer Andrew Thomas Lee at Old Brick Pit Bar-B-Q, in the northeastern suburb of Chamblee. It’s a small joint designed to look like a red barn. Old Brick Pit has been cooking whole hams with hickory smoke on that, well, old brick pit for the last forty years, but I’d never heard of it until these two gentlemen suggested it. The menu is sparse. A barbecue sandwich and a cup of a classic Georgia-style Brunswick stew will set you back less than $6. A soft bun, juicy pork, and a thin, red vinegar sauce come together for a perfect version of Georgia-style barbecue. The Brunswick stew, packed with corn and smoked chicken, was some of the best I’ve had. It’s a great barbecue joint, and a reminder of Georgia-style barbecue in a city that’s now known more for more modern versions of barbecue.

When I posted a photo of Old Brick Pit, I received a curt comment: “not one of our finer establishments in ATL.” A hashtag of #notworthy was added. More like #smdh. Old Brick Pit isn’t flashy, and you won’t find smoked brisket or a dozen side choices. An hour earlier I had just sampled nearly the whole menu at Heirloom Bar-B-Que, quite literally one of my favorite joints in the country, and it took four trays to hold it all. Heirloom’s inventiveness is nearly unparalleled in barbecue, but its variety doesn’t diminish the perfect example of Georgia-style barbecue at Old Brick Pit just because the Brick Pit’s menu can fit on one plate. There’s room for a visit to the widely publicized new kid, Heirloom (2010), and the joint that’s been keeping it simple since 1976 (Old Brick Pit), but whose latest national newspaper clipping is from 1988.

I had a similar “discovery” in Little Rock several months ago. Scott Moody of the locally-made PK Grills suggested we meet at HB’s Bar-B-Q (1961). I’d seen the name only once before when a friend mentioned it last year, but the suggestions for a chain with seven barbecue sauces to choose from came pouring in when I mentioned Little Rock online. HB’s building sneaks up on you amongst the other houses in the residential neighborhood. I was happy to soak in more than fifty years of history at a table here, even if I had to pay cash. The house-made, Delta-style tamales covered in chili were great. The brick-red sauce was thick, but more tangy than sweet. It dripped from the jumbo sandwich of shredded, smoky pork topped simply with shredded cabbage, and served on a pillowy bun for $5.95. It was unique without being complicated, and gave me a window into Arkansas’s barbecue tradition.

Too often we take these joints for granted. It’s easy to assume a restaurant that’s been around forever won’t ever close, but who will be there to take over when the owner retires? The next generation doesn’t always stick around. Running a barbecue joint is tough on your health, and it often comes with little reward. Nobody’s getting rich selling $4 pork sandwiches, like the ones at Grady’s BBQ in Dudley, North Carolina.

After enjoying as much of Grady’s menu as I could fit (do not skip the butter beans), I talked with owner Steve Grady in the pit house. At eighty years old, he still cooks whole hogs over a hardwood and charcoal fire. We stood in the heat of the pit room as my shirt soaked through with sweat. Grady, in long sleeves and jeans, didn’t even get wet around the temples. I had a feeling the venue he chose for our discussion was designed to limit it. Still, he told me stories of his life’s work on the farm, in the sawmill, and at the barbecue pit. Grady is a man who’s not afraid of hard work, but he knows his limits. He didn’t seem hopeful that Grady’s had too many years left. When he and his wife Gerri close it, it’ll be gone for good. North Carolina will lose another master of whole hog barbecue, and we’ll all lose another great barbecue joint.

The same will likely happen at Pat Gee’s (1963) in Tyler, a quintessential joint I recently wrote about. It’s also been refreshing to see new life breathed into the pits at the original Bodacious Bar-B-Que (1968) in Longview.  That’s not to say that new barbecue joints can’t develop. It takes time, nobody knows exactly how much, but I’m hopeful when I happen upon new spots like Zeke’s BBQ in Windthorst, Truth BBQ in Brenham, Evie Mae’s in Wolfforth, or The Smoking Oak in Mercedes. A few more years under their belt, and they might become part of Texas barbecue joint lore, but it’s not automatic. Last year we published a list of the twenty-five best new barbecue joints in Texas. One that I had great hope for was Hwy 29 BBQ in Bertram, but it has hit hard times. It had to close temporarily due to a lack of summer business. I hope it comes back strong, but we may have lost a great barbecue joint before it ever really got going. 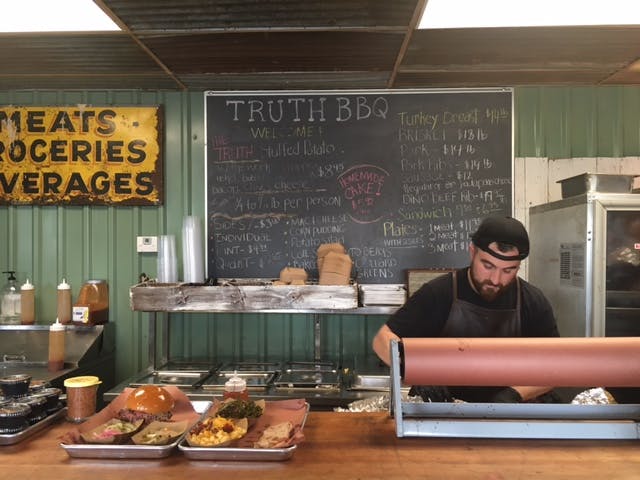 Some good news just came out of Farwell that the Thursday-only operation, The BBQ Shop (another from the 25 best new joints list) will be back open on August 18 after a hiatus due to co-owner Judy Mimms’s medical issues. It’s a reminder that you can’t just plug a new employee into a barbecue joint to keep it running. The owners are the operators, the pitmasters, and the heart and soul of a barbecue joint.

We all know that barbecue is growing, but a reminder is in order. As we pointed out last year, the independently run, counter-service barbecue restaurant numbers are shrinking. Those are the barbecue joints. When they’re gone, they’re gone. We need to foster that category of new restaurant if we ever want them to grow into barbecue joints. Those new places on their way to becoming bona-fide barbecue joints deserve our support, and for barbecue’s sake, don’t dismiss the ones we already have.