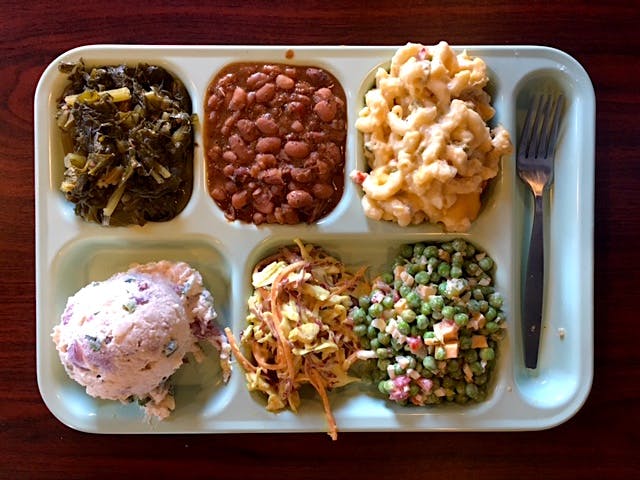 It began as a friendly meal. I had invited my colleague Christiane, to a barbecue lunch. I really just needed an extra stomach, but a shared meal turned into a debate. It began when she called the combination of beans, potato salad, and coleslaw the “Texas trinity.” I spit out my brisket to remind her that term already has a place in the Texas barbecue lexicon, and it refers to meat. Specifically, the trinity is brisket, spare ribs, and smoked sausage. Christiane argued that sides were just as important. I laughed. She didn’t.

It was then I started recording our conversation. Christiane’s opinions about mac-‘n-cheese are as strong as my opinions on beef ribs. She suggested my palate for sides was muted by all the meat, and offered to be my sidekick, pun absolutely intended. And thus was the start of the SideKick. You won’t hear from the SideKick on every review, but leaving her out of #SidesWeek would be unthinkable, even if it means another disagreement.

We decided to do a joint ranking of side items in Texas barbecue. Not specific sides from a specific place, but more generally, like a battle between collard greens and fried okra. I sent her my rankings, with onions rings at the top, of course. She went berserk. Below are the final results. If you disagree, take it up with the SideKick in the comments section. 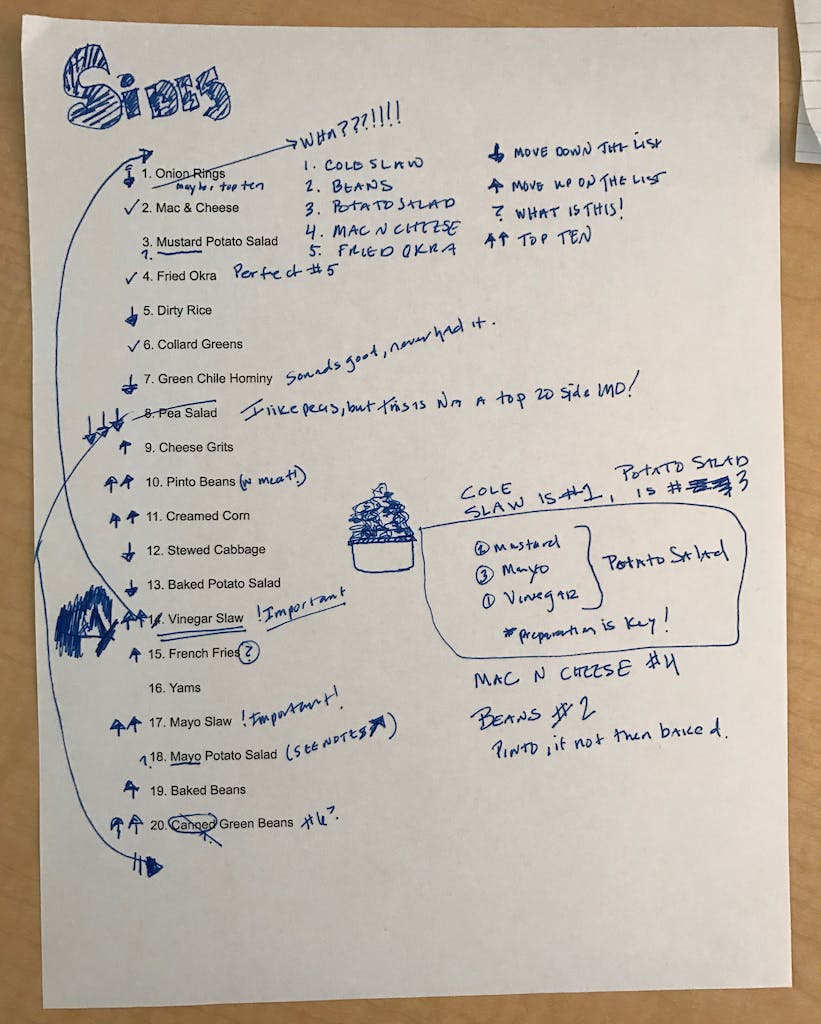 The image above shows my initial list with Christiane’s mark-ups. This list assumes pickles and onions are part of every plate as a garnish, and are not considered a side. After a conversation to sort through her doodles, the list printed below resulted. The long explanation for her number-one was required since coleslaw at the top spot needs defending.

Last week I attended the theater. (Because I am a cultured person.) Before the show started, the host announced the sponsors. Someone, someone, something, something, and “… the Salt Lick … the best BBQ in Texas.” I leaned over to my friend and said, “Not the best barbecue, but maybe the best coleslaw in Texas.” I said this in a low voice. (Because I am a polite cultured person.) In Central Texas, this could be construed as a controversial statement. I enjoy going to the Salt Lick—it has become a tourist destination, and sometimes we all need to be tourists in our town—but my fondness for the place is not so much for the meat, but rather, for the bottomless bowl of coleslaw. The Salt Lick has nailed this menu item. The simple slaw is made using a base of cold, crisp cabbage and a vinegar-based dressing. The dish is topped with a sprinkle of sesame and celery seeds. (Because the Salt Lick is a culinarily cultured place.) The best part? When you get to the bottom of the bowl—and you will because this slaw is divine—there isn’t a nauseating goopy pool of watery mayo waiting for you. Just the end of the bowl. As pickled ginger is the palate cleanser during a Japanese meal, vinegar coleslaw acts similarly beside barbecue. It really is the ideal light side to what is otherwise one very heavy meal.

3. (tied) Baked Beans — Because I’d rather have baked beans than no beans.

5. Mac ‘n Cheese — There are so many variations it’s hard to know what you’re getting, but I like a baked one with the little crumbles on it.

6. Fried Okra — It’s one of my favorite things if it doesn’t come from a freezer bag.

8. Creamed Corn — Also not from a can. If it looks anything like a mayo cole slaw, then I don’t want any part of it.

11. Onion Rings — I like them, but not better than fries.

14. Baked Potato Salad — It sounds like a steakhouse side.