Sausage. It’s one of the signatures of our state’s barbecue style, but the time intensive process of grinding, stuffing, and smoking sausage fell out of favor when barbecue left the meat market. With the rise of commercial sausage makers, many barbecue joints were (and are) happy to purchase their sausage from outside suppliers, but, with the rise of the artisanal movement, a few are bringing back the tradition of homemade sausage.

I’ve written in the past about the storied barbecue traditions of Czech and German sausage in Central Texas, and of spicy beef links in Southeast Texas (we’ve started an in-process list of all the homemade sausages in Texas), but some of the better sausages in Texas are coming from new joints. Michael Hernandez of Hays County Bar-B-Que in San Marcos, which opened in 2007, told me earlier this year that he made a decision when they first started business: “If we were going to be in the barbecue world, I wanted to be known for making our own sausage.” He opted to replicate the simple seasoning and ring-shaped links he fell in love with at Kreuz Market and Smitty’s in Lockhart. The result is smoky, juicy, and fantastic.

At Pecan Lodge in Dallas, they didn’t start things off with a homemade sausage, but it became a priority in 2011. Pitmaster Justin Fourton explained that “Everything we do here is made from scratch, and we wanted to take the same approach with the sausage, so we learned how to make it.” A spicy pork sausage was the result, followed soon after by a jalapeño and cheese beef sausage. They now produce so many links every day that one person is dedicated completely to sausage-making and smoking.

Up the road in North Dallas, Cattleack Barbecue owner and pitmaster Todd David, who purchased his equipment in 2013, makes five varieties. “I had no idea what I was doing when I got into it,” he told me. “I got some books on charcuterie.” His first batch wasn’t as bad as he’d expected, but it took a while to refine it. He calls it Original #17 because it took seventeen iterations of the recipe to get something he was proud to sell. “The biggest challenge was getting the casing to snap.”

David uses his meat trimmings for the bulk of the stuffing, but considering that he only creates about fifty pounds of trim in the two days that Cattleack Barbecue is open during the week, he has to supplement the mix with whole muscles. The rest of David’s varieties are fairly common (hot guts and jalapeño cheddar), but there’s one on the menu that you won’t find in Lockhart–a beer, bacon, and beef link. It’s as good as it sounds, and the Shiner beer really makes an impact on the flavor. This sort of innovation will help create the next generation of Texas sausages.

There’s a reason homemade sausage has fallen out of favor: it’s a laborious process to make it from scratch. The meat needs dicing before it’s ground, then the spices are measured and added before the whole mix has to be chilled again. Evan LeRoy of Freedmens Bar in Austin said the next step–mixing in ice–is the worst. “My hands get red from all the mixing because it’s so cold,” he told me. Then it all has to be stuffed into casings. LeRoy uses a hand crank stuffer a few times a week to make a new batch. He’d like to upgrade to some better equipment, but his kitchen is tiny. “It’s more about space than cost.” I asked him why he doesn’t just buy raw sausage from a local vendor. “That’s just my whole philosophy; everything from scratch.” (LeRoy was introduced to Texas sausage when he worked at Hill Country BBQ Market in Manhattan before moving to Austin. Hill Country gets its sausage directly from Kreuz Market.)

It’s also, as many will tell you, a matter of trial and error to figure out the right balance between the meat, fat, and liquid. LeRoy settled on a 50/50 mix of beef and pork, studded with jalapeños, salt, black pepper, and garlic. The extra pork and garlic make for a rounder flavor than those famous rings from Kreuz, but they’re just as juicy.

John Lewis of La Barbecue in Austin took a page from some older books on the craft. “When I started making it here I used [Southside Market] as a base but made it more spicy. If you’re going to call it Texas hot guts then you should actually make it hot.” And Lewis’ sausage–one of my favorite in the state–certainly has kick: I advise having a drink handy halfway through the first link.

Some may borrow from tried-and-true traditions, while others, like Ronnie Killen, of Killen’s Barbecue in Pearland, dabble with experimental recipes. Killen unveiled a new sausage at this year’s Houston BBQ Festival, a riff on the pork-and-beef sausage at Killen’s Barbecue he’s been making since last year: a bacon, belly, and beef sausage, which is now one of his most popular items. “We sell out of it first everyday,” said Killen. It’s quite the premium product too. Killen doesn’t use trimming to make it. The sausage is a 60/25/15 mix of Creekstone brisket, Duroc pork belly, Nueske’s applewood smoked bacon. After it’s stuffed, he places it on the racks of the brick pit for two to three hours to smoke it slow, then cranks up the heat for the final hour to cook it through.He makes about 100 to 140 pounds of it per day compared to 60 to 80 pounds of the regular sausage. Despite all the fat in the mix, Killen describes it as “not greasy; it’s juicy.” He’s right. After I bit into it the juices kept flowing as if I’d hit a gusher.

Some of these new sausages sound intriguing, but nobody in Texas barbecue is as creative with sausage recipes as Tom Micklethwait. He guesses he’s had about twenty different sausage varieties like venison, duck boudin, and lamb chorizo on the menu since opening in 2012. “It’s kinda the hallmark of Texas barbecue,” he told me. A couple weeks ago it was a goat sausage that caught my attention. It was spiced much more aggressively than most barbecue sausages. When I asked Micklethwait about the ingredients he recited a long list. “There’s coconut milk, curry powder, garlic, coriander, allspice, thyme, fresh chiles, paprika, and cloves. Cloves go really well with goat.” But even Micklethwait admits that not all of the experiments work out well. “The worst one was Big Red sausage. It tasted like over-spiced ham. At least it was red.”

Micklethwait calls sausage-making a hobby that he started toying with when he was 21. Now he uses it in a more practical sense. Cooking great barbecue means lots of meat trimming, and he uses every bit of that trim in his sausage. The trimming also improves the economy of the finished barbecue since what’s left is all usable. It’s a win-win, and Micklethwait says it’s also a big money saver. “Without factoring in the labor, it costs half as much to make my own sausage” than it does to buy it from a vendor. The labor is all performed in his food trailer, and now that he has the process down, it takes just two hours per day to make all of the sausage. Given the money he saves and the higher quality of the sausages, it seems like a no-brainer to make it himself. For Micklethwait, “It’s more surprising to me that more people don’t do it.” 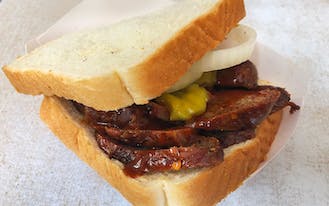 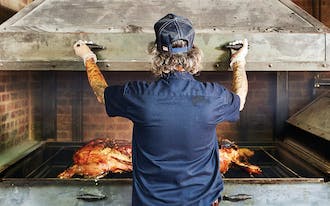 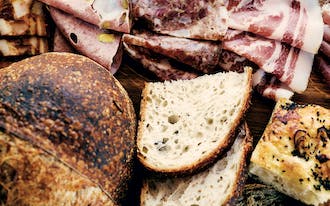