Conventional wisdom holds that traditional Texas barbecue doesn’t need to be sauced. That Texans have an aversion to the stuff. Case in point? A recent primer on national barbecue styles in America on Eater noted that “while the rest of the nation is busy making barbecue sauces, many places in Texas eschew it completely.” This theory is fortified by the fact that one of the most famous joints in the state, Kreuz Market, doesn’t even offer sauce. Not on the meat. Not on the side. Not to be bought in a bottle. Their stance on barbecue sauce has become as much a part of their identity as their brisket.

But the truth is, Texans love sauce. The rest of the state is flush with it. From the thick, sweet pastes to the thin, vinegary dips, sauce is on hand at literally every other joint in Texas.

So what is a Texas style sauce? A description I hear often is that it’s like Kansas City’s tomato-based sauce, but less sweet and more spicy. That’s what the marketing team at Kraft hopes you believe. When they created their regional line of Bulls-Eye BBQ sauces, the Texas version was described as “smoky mesquite with the sting of hot peppers.” Others describe Texas-style sauce as a sweetened tomato-based sauce with a good kick of vinegar. This description is probably influenced by Cattlemen’s Original, a sauce so ubiquitous in barbecue restaurants, you’re as likely to find a gallon jug of it on the shelf as you are to see a huge can of ranch style beans. It’s popular for a few reasons: it’s cheap, readily available, and inoffensive. 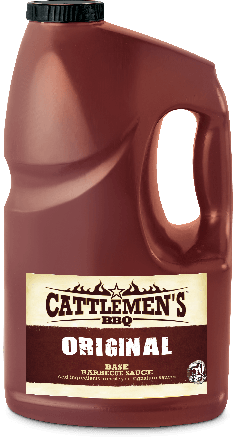 But there are plenty of joints around the state making their own sauces from scratch, and they’re about about as varied as wines in France.

The sauce of our Texas ancestors would probably look and taste a little funny to us today, mainly because it didn’t contain tomatoes or sugar. Barbecue historian Robert Moss told CNN, “From Virginia to Texas, 19th century accounts of barbecues are remarkably similar in their descriptions of the sauce…A guest at a San Antonio barbecue in 1883 recorded the sauce as, ‘Butter, with a mixture of pepper, salt, and vinegar.'” It wasn’t sweet, and it wasn’t red either. This sauce was likely used for basting while the meat cooked over direct heat, and adding sugar to that mix would just make for burned meat. A similar fat-heavy recipe is still used as the mop sauce today at community barbecues. The St. Louis Day celebration in Castroville uses a concoction made of apple cider vinegar, onions, lard, Worcestershire sauce, lemons, mustard, salt, pepper, and garlic. Ketchup is added to the mix at the end to make the plate sauce.

Ketchup became an important component of Texas barbecue sauces in the first half of the twentieth century. A detailed description of Texas sauces appeared in the March 26, 1937, edition of the Dallas Morning News. The author described a mid-Texas barbecue sauce:

“It is made simply of vinegar and hot water, melted butter if the purse allows, or rendered beef suet if not, black and red pepper and salt (pioneer sauce stopped there) and generous dashes of catsup and Worcestershire sauce. Onions and sometime lemons are sliced into it… thicken it slightly with flour and water as thin gravy is thickened.”

That is essentially the sauce recipe you’ll find at long-standing joints like Prine’s (1925) in Wichita Falls and Lenox BBQ (1949) in Houston, although they both add mustard into the mix as well. Allen Prine told me, “We’re using the same recipe that my granddad used. He taught my dad how to make it, and my dad taught me. It’s vinegar, ketchup, mustard, and some spices.” It’s not just the old joints with recipes like this either. Jack Perkins of the twenty-month-old Slow Bone in Dallas serves a thin spicy sauce with a good vinegar pop. There’s some sweetness in there too, but it would never be mistaken for a Kansas City sauce.

There’s plenty of vinegar in the sauces of the Texas Hill Country too. There, dipping the meat directly into a vat of vinegar-heavy sauce is the final step before serving. Cooper’s in both Mason and Llano are most famous for the practice, but you can get your meat dunked at lesser known joints all over the Hill Country like Double G Pit Stop in San Saba and Southside BBQ in Cherokee.

Other joints with a long history are even more simple when it comes to their sauce. The ultra-thin pepper-vinegar sauce at Jasper’s Bar-B-Que (1918) in Waco looks like it came straight from the Pee Dee region of South Carolina. They get a little thicker at Bailey’s Bar-B-Que (1931) in Fort Worth and Tom & Bingo’s (1952) in Lubbock, but these are sauces that will make you pucker, unlike the popular sweet sauces of the current era. Also at Jasper’s and nearby Tony DeMaria’s they serve their sandwiches with a side of dip. This is the seasoned liquid from the pit where the meats have been boiled for several hours (they’re also smoked), so it’s a bit like beef stock.

The same beef stock consistency can be found in Taylor where Wayne Mueller uses a recipe from his grandfather that is mainly water and gets its spice from black pepper. It’s meant to be used as a dip rather than a sauce, which is why Wayne has recently developed a more modern tomato sauce for out-of-towners with a sweet tooth. His brother John adds a bunch more onions and some beef stock to the classic Louie Mueller recipe to arrive at his dip recipe. It’s thick enough to be a soup and good enough to be eaten by the spoonful. I just wouldn’t bother mussing up either Mueller’s beef rib with anything resembling a sauce.

To many barbecue purists, myself included, the sauce should always be secondary, which is why I like it to be served on the side. This isn’t a new attitude in Texas. Even back in 1952, Frank J. Dobie preached about the sanctity of good meat in his column for the Fort Worth Star-Telegram. On barbecue sauce, “This mixture is guaranteed to deaden the perfume of the choicest meat. It will help to disguise the taste of bad meat badly prepared. Absolutely the only seasoning that first class barbecuers give it is salt and pepper.” Rick Schmidt of Kreuz Market agrees: “We go to a lot of effort to get the flavor of the meat through the seasoning and in the pit with the right wood. I don’t want to cover it up with anything.” That’s why he still refuses to serve sauce. But that doesn’t work for every customer base. When Lockhart Smokehouse, a Kreuz Market offshoot, opened in Dallas, they held staunchly to the “no sauce, no plates, no forks” principles of their cousins. Six months after opening, they caved to local pressure. Apparently Dallasites value sauce more than the residents of Lockhart.

Those sauceless stances make the news and further bolster the idea that Texas is a mainly sauce-free zone, but it’s more often that I find a sauce ladle at the ready along a barbecue cafeteria line in Texas than I find a barbecue joint owner with an upturned nose at the notion of adding barbecue sauce to his or her meat. Countless lunch combos will be eaten today covered in barbecue sauce, and most won’t think twice about their condiment consumption. Just yesterday I drove around South Dallas, a historically black part of town, to several barbecue joints where sauce on the side requires a special request, and in one case even an extra charge. They were all sweet, tomato-based sauces, but were thin and a little spicy. This varies significantly from the sweeter sauces fortified with lemon and Worcestershire sauce that you’ll find in many white-owned barbecue joints in Dallas. In fact it’s hard to tell much of a difference between the sauces at Sonny Bryan’s, Big Al’s, Mac’s, Mike Anderson’s, or David’s Barbecue in Arlington.

While ketchup might dominate the state’s barbecue sauce bottles, mustard is the star of the show in Luling. City Market in Luling is famous for their brisket, ribs, and sausage, but they’ve gained plenty of recognition for their sweet mustard sauce as well. It was so popular, a Houston joint called Luling City Market partnered with an original City Market pitmaster, Roy Jeffrey, so they could get the sauce recipe. Now Jeffrey runs his own place in McMahan called R&G Bar-B-Que, and you can find that mustard sauce on the table. Up in San Marcos at Hays County BBQ they do a decent approximation as well.

Other regional specialties abound, like the brown gravy sauces of North Texas, an oil-based sauce at the Salt Lick (devised for shelf-stability before the restaurant had refrigeration), and the incredibly spicy habanero sauce at Pody’s BBQ in Pecos. The deep brown sauce at Patillo’s in Beaumont tastes like a roux-thickened stock with chili powder and other spices. And from a recipe that’s a century old—this is your grandma’s barbecue sauce recipe.

There’s enormous variation in what we pour on our barbecue across the state, but most of it comes down to tomatoes, vinegar, spices, and some sort of sweetener. Even though we’re a long way from South Carolina, adding mustard is also plenty acceptable. Recently we’ve even taken to adding espresso, a la Franklin Barbecue’s famous concoction. (Not far behind on the caffeine trail were Killen’s Barbecue, in Pearland, and Cattleack Barbecue, in Dallas.) Maybe we’ve marked the start of the espresso trend, or maybe peaches and pineapple will be the next big thing (I hope not). Either way, unless you’re at that one joint in Lockhart, Texans can rest easy knowing that a hefty helping of barbecue sauce won’t be too hard to find–if you want it, that is.