Kerlin BBQ in Austin, Texas, is the best barbecue joint in the country. Or at least that’s the conclusion Johnny Fugitt arrived at after traveling the country and eating 365 barbecue meals in 365 days, a journey he chronicled in his new book, The 100 Best Barbecue Restaurants in America. 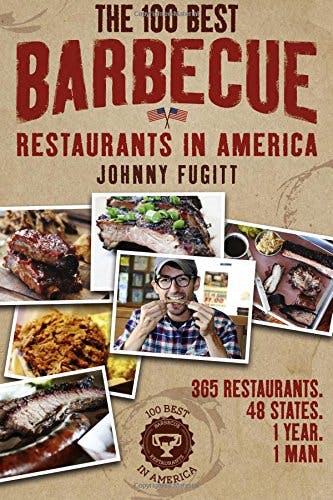 Neither the barbecue of Aaron Franklin nor Justin Fourton swayed the needle for Fugitt as much as that of Bill Kerlin. When I spoke to Kerlin about his top-billing he was predictably excited. “I was definitely surprised. I was just hoping to make it in the book.” But what about John Lewis and la Barbecue, heralded as Austin’s best in two local Top 10 lists last year? From his blog, Fugitt seems to have skipped them altogether. The same goes for Killen’s Barbecue in Pearland. Expecting Fugitt to hit them all is unrealistic, but those are some pretty big names to skip. I mean, he made it to a Dickey’s Barbecue in Utah (they didn’t make the Top 100), but not la Barbecue or Killen’s Barbecue.

Not to sell Kerlin and his barbecue short. Last year, Thrillist called it one of the best new barbecue joints in the country. They’ve been featured on Lonely Planet and in Travel + Leisure. Kerlin clocked in at #9 on Fed Man Walking’s list of the ten best barbecue joints in Austin, and it snuck up to #7 in a similar list by the Austin American-Statesman‘s Matthew Odam. The Kerlins opened their trailer too late to be eligible for the 2013 Texas Monthly Top 50, but we gave it a positive review last year and a 4.0 rating, which would make it eligible for the next Top 50. The people enjoy Kerlin BBQ, but lately they’ve been getting attention for something other than their smoked meats.

The bombshell came in January of this year. Bill’s wife, Amelis, had been busy perfecting her kolaches. They featured smoked meat from Kerlin’s pit and represented a way to differentiate Kerlin in a crowded barbecue market in Austin. Their kolache business got so popular that it was outpacing the barbecue, and they cut their barbecue hours to just Fridays from 11-2; just three hours of barbecue per week. (Fugitt visited before this change in early 2014, foreshadowing in a blog post “It doesn’t get much better than Kerlin BBQ”).

In March of this year, possibly spurred on by some major recognition by Bon Appétit as one of the best barbecue joints in Austin, they had a slight change of heart. Rather than just serving barbecue on Fridays, they brought it back to three days a week (kolaches are available four days a week). Bill Kerlin explained the desire to get back to barbecue. “We had so many customers asking us to do it, plus we love to cook.” Now you can enjoy the country’s best barbecue on Friday, Saturday, and Sunday. Maybe this new distinction will spur them on toward broader hours.

You might question his choices, but what Fugitt accomplished was a major undertaking. He dedicated a year of his life to traveling the country for barbecue, and didn’t receive funding from sponsors for taking a year off of work. It’s hard to question his fortitude. In doing the legwork and actually eating the food in all of these restaurants, he has done more than most publications who throw together their best-of barbecue lists based on hearsay and popularity. This book is the anti-popularity contest, otherwise Kerlin BBQ would probably not have taken the top spot.

As for the rest of Texas, they are well represented. A full 20% of the Top 100 are in the Lone Star State. There’s Kerlin BBQ at the top, and both the Granary in San Antonio and Franklin Barbecue appear in the Top 10. Fugitt’s home state of Missouri gets twelve slots while New York City and Kansas City enjoy the #2 and #3 picks respectively. The rest of the book has some misses in my opinion (Gates BBQ in the Top 25?), but the Top 100 is mostly full of hits, and this book will make for a good guide if you’d like to find out for yourself.